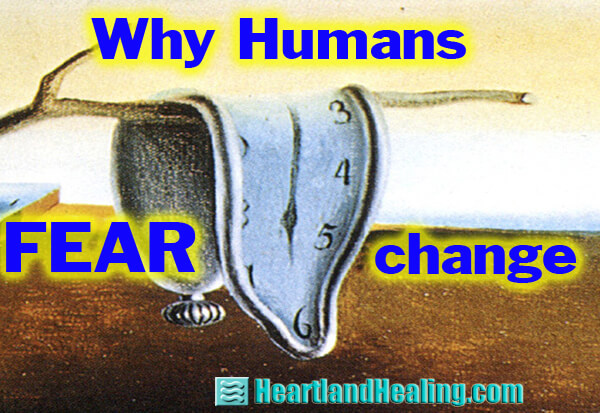 I don’t have a single shred of research evidence to backup this claim: Humans fear change. It’s the last thing they want to do.

I’ve never been a fan of “research”, “studies” and “scientific proof.” And, (ha, guess what?) research shows that my skepticism is justified for a number of reasons, not the least of which is that it’s documented fact that whoever or whatever funds the research has confirmed influence over the results. Add to that the fact the “science” has strayed from the true nature of the scientific method as I learned it decades ago. That is, a scientific experiment or observation must be considered valid only if that observation or experiment is capable of repeated results. For example, Newton’s Law of Gravity wasn’t established because an apple fell out of a tree in Isaac Newton’s garden and landed on the ground sometimes. No. The apple fell and hit the ground every single time. And if you went to France or Spain or Argentina, the apple always still hit the ground. Now that is a scientific fact. The problem with our current use of “scientific proof” is that it’s a “sometimes” thing. Take a particular pill and it works “sometimes.” Get a flu shot and it works “sometimes” — like 30 percent of the time last year. That’s not science. That’s propaganda.

So it’s a good thing that I don’t have any research to spout in support of my claim that humans resist change. That doesn’t mean there isn’t any out there. It’s only that I don’t care to look for it or consider it. You’ll just have to trust your own common sense once I lay out what I’ve seen and you’ve probably experienced.

“Don’t go changin’ to try and please me. You never let me down before.” So sang Billy Joel and there’s a nugget of truth in his lyric. When humans are faced with the prospect of making a change in their lives or choosing something that may make a change in their lives (like a political candidate), humans will resist change partially based on the idea that just because something has been around a long time, it must be “the way it’s done”. Longevity is a powerful influence on why people opt not to change — because they place value in what they think has always been around, believing that it must be good. It’s sorta like why some people vote Democrat because in their mind, they believe Democrats have always been a force for social justice. Or they vote Republican because the longterm reputation is that it’s good for business. So they fear change partly because it’s new to them.

“Turn and face the strange…” David Bowie knows the challenge of change. He sang about it so appropriately: It’s different from what we know. Strange means comfort-factor is lost. Strange means the unknown. Fear of the unknown is unacceptable in most people’s minds.

Beatle John Lennon had a clear take on the unknown. In a “Playboy” magazine interview he said, “It’s fear of the unknown. The unknown is what it is. And to be frightened of it is what sends everybody scurrying around chasing dreams, illusions, wars, peace, love, hate, all that — it’s all illusion. Unknown is what it is. Accept that it’s unknown and it’s plain sailing.” Gotta love that. Accept unknown for what it is: unknown.

Giving up that fear that Lennon spoke of moves us closer to beneficial change. There is nothing fearful about the unknown except the value of fear we put on it.

“Death be not proud.” Another John had a take on fear of change, way before Lennon did. Preeminent metaphysical poet John Donne wrote that first line of “Sonnet X” in 1609. And Donne’s take on death highlights the reason I believe that people fear change. On a very deep, subconscious level, people somehow equate stasis, the state of no change, as being “safe.” Subconsciously, people believe, “Hey, I’m alive right now so I’d better not change anything. Alive is good. Change from what’s going on now might not result in my being alive. I’d better not risk it. I’d better not change.”

So, on the most rudimentary level, fear of change is actually fear of death. It’s that strong. And it’s almost logical. You can latch on to that idea and change does indeed sound threatening. Status quo symbolizes — incorrectly — life. The mistake is believing that keeping things the way they are will keep us safe and alive.

Ironically, change is actually a symptom of life. Only living things initiate change. Think about it. Dead things don’t change, do they? Change is proof of life, in a way. Status quo is inert. Nothing really changes if we stick with status quo. So maybe think about that when you get to a voting booth. Or think about this from John Lennon: “You say you want a revolution. Well, you know, we all want to change the world.”