Home » Heartland Healing » Chemical Warfare: We’re Waging It on Ourselves 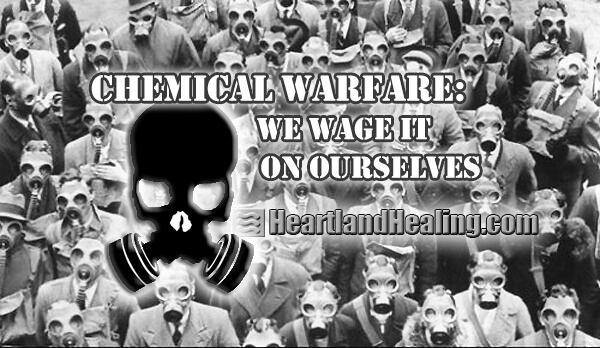 Chemical Warfare: We’re Waging It on Ourselves

“For your consideration,” as the late, great Rod Serling used to begin every episode of the classic, “The Twilight Zone”: Once again, the media is reporting statistics that America is fatter than ever. We can do away with quaint terms like “the Cotton Belt,” the “Rust Belt,” and the “Corn Belt.” We’ve now got the “Cholesterol Belt,” the “Fat Belt” and the “Heart Attack Belt.” The Southern tier of states lead the way with their biscuits, grits and gravy but no state is immune from the growing disaster.

Chemical Warfare. Sure, it’s easy to look at diet and sedentary lifestyle as causes of obesity. But there’s one cause that is too often overlooked. Long ago I learned to look deeper into cause rather than just view the veneer. One of many things I’ve considered in that way is learning what fat is for.

Fat is. Fat exists. It must have purpose. And it does. One big one is that fat is an energy storage locker in case it’s needed in times of famine. And although Americans are definitely undernourished in most cases, we have no lack of calories to eat. Famine has hardly come knocking anywhere in the developed world. But another vital, and far overlooked function of fat is as a storage locker for toxins.

Epidemiologists and environmentalists have long realized that if they want to track the extent that poisons have infiltrated our world, they need only trap some wild fish in the seeming pristine streams of Montana or elsewhere and analyze the fat tissue to find toxins. They don’t look first at organ, muscle or nerve tissue. They look at fat. For the simple reason stated above. Fat is the dumping pot for toxins in the body. Toxins accumulate in fat tissue. The more toxins, the more fat is needed to store them.

Natural Detox The body has evolved to do a pretty good job of eliminating toxins. The liver and kidneys do the brunt of the work by processing toxins into debris that can be excreted in urine, feces, breathing and sweat. Some toxins are so powerful, though, so poisonous, that the liver can’t pull it off. Think cyanide or arsenic or Vicodin. Then there are the chemicals that the human body has absolutely no idea what to do with because it’s never encountered those toxins ever before.

We live in a sea of chemicals that has inundated us since the birth of the Industrial Age. It’s not the latest round of artificial sweeteners that are the leaders in the assault on the body. They’re just the trendy scapegoat. Read this next sentence carefully: Humans have found, invented or synthesized over 50 million different chemicals over the course of history, the vast majority of them since World War II. That’s millions of chemicals the human body, or the world, for that matter, has never experienced or adapted to in all of evolution. A novel substance is either isolated or synthesized every 2.6 seconds on the average, according to Dr. Hideaki Chihara, Ph.D. chemist and former president of Japan Association for International Chemical Information.

With no way to metabolize a chemical or battery of chemicals, the body does the next best thing. It sequesters that unknown compound as far from important body parts as possible. The body shunts toxins away from the heart, brain, organs, muscles, nerves and skeleton and dumps it where it can: in fat cells. And like anyone who has collected too much “stuff”, closets, basements, attics get overloaded and next thing you know, we need more storage space. With the body, that means more fat, bigger fat deposits, a higher ratio of fat to muscle and bone and there you have it: obesity. It’s a myth that we are born with a static number of fat cells. We make more fat cells during childhood and adolescence especially.

Forest for the trees. Myopia is inherent in the nature of reductionist science and evidence of its danger. When we focus on the details, and that’s where the devil is, we lose sight of the obvious. Perhaps it’s a function of overpopulation that we become so reductionist in looking for answers. There are so many of us that we scramble to find self-worth, occupying ourselves with tasks to validate our existence, reducing our interest to picayune matters, thinking the secret must be in our intellectual investigation of the tiny detail. We are inept at taking a more relaxed approach to understanding the universe and struggle when something confounds our analysis. Maybe we don’t need to know everything. Perhaps we would do better with what John Lennon recommended, “The unknown is what it is. Accept that it’s unknown, and it’s plain sailing. Everything is unknown… then you’re ahead of the game. That’s what it is. Right?”