Home » Heartland Healing » Christianity, Buddhism and Islam: The Image of Cause and Effect 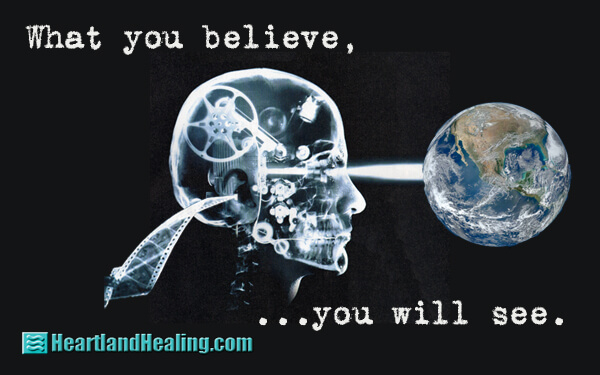 I have long been interested in what people believe. Belief precedes perception and interacting with the physical world is all about perception. Perception, like all things in the universe, follows the one immutable law: Cause and Effect. In the case of perception, it is the clearest demonstration of the link between thought and form.

Most people realize that perception and truth are not the same thing but too often people believe that truth is understandable and perceivable. It isn’t. The nature of truth is not the subject of this polemic. That is a far deeper quest for a later date. Rather, let us examine how one can develop clarity of perception which is a step on the road to our most useful tool in this physical classroom: vision.

An Ongoing Example. My head was turned when I heard an interview with author Karen Armstrong on National Pilfering er… Public, Radio a few years back. Armstrong is a defrocked Catholic nun who left the Church nearly 50 years ago. Still, every mainstream biography of her trots out that fact as if it grants gravitas using both sides of the coin, i.e. she supposedly has the insight of having been in the Church and the foresight of having left it.

Armstrong was promoting her book, Fields of Blood: Religion and the History of Violence. Intrigued by the title, I read the book and found that, though Armstrong attempts to explain away violence and religion, the real nugget is that she does indeed unwittingly reveal the primary fuel of violence over history (territoriality) and its ignition, agriculture. I’m not sure Armstrong ever grokked it herself.

The most valuable information harvested from Armstrong’s book (she admittedly is an expert historian who is extremely well-read and deeply resourceful,) is the accurate historical description she gives of Muhammad, a singleminded political leader born in 570 AD. Muhammad is typically lumped in with Buddha and Jesus as the figurehead of one of the world’s largest religions, Islam. One difference is that since Muhammad lived more recently than either Buddha or Jesus, there is a copious and accurate historical catalog of his life. Another major difference is that the historical record clearly describes Muhammad as an expert warrior, conqueror and despot, traits that Buddha and Jesus lacked.

Armstrong’s depiction of Muhammad is rooted in historical reference and prompted me to do more reading about him and the early days of Islam. Like most Westerners, I had passively accepted the idea that Muhammad, Buddha and Jesus were more or less spiritually, morally and philosophically equivalent, having founded great religions of peace. The historical record reveals that’s not the case.

As perhaps the most salient issue in the public eye worldwide, conflict between Islamic ideology and Western values is a cogent example of how to cultivate clarity of perception immediately prior to acceptance of vision.

Go Beyond the Icing. No longer will Ariana Grande be remembered simply as the pop singer caught on security video licking a donut and decrying American values. The icing on the cake is like the media we consume in the Age of Information: thin and insubstantial. The first step in clear perception is to grow your own food, so to speak.

When seeking information that means doing hard digging, usually in print and older sources. Newer sources are sanitized and purged on a daily basis. (Will school children of the future know anything of who Jefferson Davis was and the mistakes that he represented?) But reading and absorbing firsthand accounts is just the beginning. That still depends on bringing information in from the outside. After learning to glean information from a cleaner, deeper source we are still left with collating and comparing that information with a central processing unit that operates on its inherent kernel of organized data. Our own CPU has that ability to compare and relate information to our onboard operating system that was installed at inception. In so many other words, we can call it “intuition,” “common sense,” — even call it the “smell test.” “Higher Self” is not an unfamiliar term, either.

Once information is observed, it must be recognized as a projection and thus, reflection is required. The final evaluation cannot be anything but the thought that is in the projector. Many times we are not even aware of the mechanism as it displays that thought. Only a trained mind is able to identify the source thought and follow it to the origin. Perception is only the by-product of belief as the projector of our mind sends information to the screen and we watch the movie of the world go by. The value in observation of the world is in recognizing the reflection it represents. The question we must end up asking is: Shall we feed the film (thought) from the outside world or from the onboard guidance system?

Getting back to Karen Armstrong’s argument, Randall Terry has produced a four-disc DVD set titled, “What Would Muhammad Do?”, that draws a linear thread from Muhammad’s life and actions to the current headlines seen almost daily that once seemed inexplicable. With reflection, those actions become clear.