Home » Heartland Healing » Could We Kill a Planet? 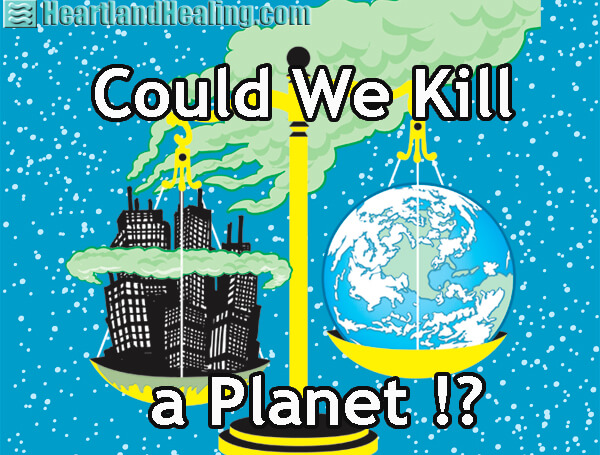 Eco-pioneer James Lovelock, the man who conceived the Gaia Theory, the idea that the Earth is the equivalent of a living organism with interlocking, connected systems, has lost hope. At age 97, Lovelock sees no way out of our climate catastrophe and predicts 6.6 billion humans will perish before the end of the century as the result of the eco-turmoil we have wrought.

Lovelock, a prominent scientist with a career arc that spans NASA, JPL, books, inventions, awards, a Ph.D. in medicine and membership in the Royal Society was the first contemporary scientist to remind the human race that we are part of a larger biosphere. In the 1970s, Lovelock’s book, Gaia, A New Look at Life on Earth, introduced his description of the earth as a giant organism with self-regulating systems analogous to the functions of the human body. The earth has the capacity to remove toxins, initiate an immune response, metabolize and process materials, regulate temperature and in general, sustain itself as a life process.

While the idea of earth as a holistic entity is commonly accepted now and Lovelock’s theory is the basis of ecology, climatology and environmental systems, it was a novel idea 50 years ago.

Gaia Terminally Wounded. In a Rolling Stone interview, Lovelock said the scales have passed the tipping point. It is painfully obvious that catastrophic change is occurring and at a rate exceeding earlier projections. For thousands of species, life is becoming untenable. More vanish each day. What brand of hubris makes us think humans are immune to extinction? Worse yet, if Earth is indeed a large, living organism, what makes us think it could not die at our hands?

In view of that possibility, some drastic measures may turn this thing around. Only by taking such steps and similar ones might we reverse the planetary sickness and preserve a biosphere that supports life as we know it. Concerned about a dying planet? It’s time for intensive care.

Immediately cease all industrial livestock production. Eat far less meat or go vegetarian entirely. This frees valuable land for production of actual food rather than commodities. Replant prairie where prairie is supposed to grow, forests where forests are supposed to grow, vegetables and food where agriculture can properly care for the sustainable nature of the soil. This will create a vast carbon-banking biomass that will literally draw CO2 from the atmosphere. As it is now, with the majority of commodity-corn and soybean growing dirt lying fallow seven or more months a year, we are losing that mechanism.

Yes, we will have to learn to eat real food rather than the processed foods that corn sugar, corn gluten, soy protein and the like bring to our table. Vegetables, fruits, nuts and edible grains must replace them.

Immediately cease all fossil fuel energy production, coal and gas, and build the new breed of clean nuclear reactors to serve as a stopgap for the couple of decades needed to fully develop solar, magnetic, fusion or other energy systems. Major changes will include limiting the use of artificial lighting after dark to emergency situations only. Dump air conditioning entirely. Hominids did fine without it for all but 100 of our six million years here.

There is no such thing as “green development.” All development is a challenge to global health at this time. Cease all building of anything immediately. Turn not one more spade full of soil. Pour not one more yard of concrete. Admit it: We have no need for one more strip mall. There is no shortage of buildings. Re-use the ones that are vacant in all our cities and rural areas. Building more empty boxes on top of where other empty boxes were is disgusting. Spread not one more mile of asphalt, concrete or macadam. We have nearly 20 million miles of roadways. Where else do you want to go?

Eliminate the internal combustion engine entirely, phasing out over a five-year period. That engine is perhaps the most catastrophic invention in human history, no doubt responsible for more deaths than gunpowder, atomic bombs or bullets. We have to scale down and become modularly sufficient. Source locally and we don’t need the vast web of transportation we currently rely on.

Without the combustion engine, we will be forced to develop a solution. Is it magnetic, gravitational, electric? It isn’t known. But the solution will not come from Detroit or a carmaker. We have to be outside the box to see it.

And on the human, do-able, smaller scale, there are very practical things we can do. We worry about lead showing up in kiddie toys made of plastic, petroleum-based material containing more chemicals than a toxic waste dump. The real villains are the 30,000 or so chemicals that have access to our bodies and that we know little about. PCBs, parabens, phthalates and thousands more are finding their way into the ecosystem. We can do without plastic. We can do without non-stick pans and room deodorizers. We have to.

No one can prepare for the chaos that Lovelock predicts: Food fights will be real. Social restraint will break down. The infrastructure will collapse. The only solution on a personal level is to become unattached to the technological crutches we’ve been convinced are necessary. Pharmaceutical drugs won’t be around. Processed food, telephones, mechanized transportation will all be gone. It’s impossible to predict what will change so learning to adapt is vital.

The most important change needed is to eliminate fear as a motivating emotion. That emotion is what drives our consumptive behavior. We justify “progress” as being good for the human race or for society or for the economy or national security and so on. But now, before every action, we have to ask ourselves: Will this be good for the planet? Nothing matters if Gaia does not survive.