Home » Heartland Healing » Creation Myths: In the beginning was…? 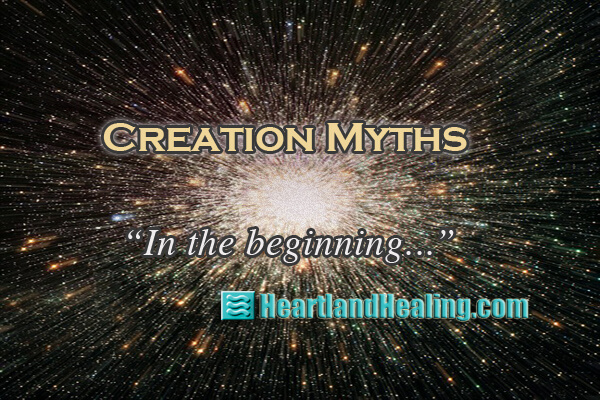 Creation Myths: In the beginning was…?

“The world is full of origin myths, and all are factually false.” — Joseph Campbell

Maya is the Sanskrit word meaning “illusion.” In the Mahabharata, a basic compendium of ayurvedic knowledge, its concept is clear. Ancient Indian science calls the world we see with our physical eyes maya. What we mistakenly call the “real” world, the world of form, is not really as it appears to be. It’s an illusion. This idea is not limited to ancient India. For example, the sentiment is echoed in the words of mystical poet William Blake when he wrote, “We are led to believe a lie, when we see with, and not through, the eye; which was born in the night, shall perish in the night, while the soul slept in beams of light.”

The world is an illusion and we are trying to figure it out. What is there to figure out if it is illusion we are trying to understand? As Campbell notes, all notions of how the physical world was “created” are indeed but myth. The only question: Can they move us toward truth?

Pick one… or more. Mankind has always tried to explain how the world came to be. There are so many creation myths that how could only one be true? Most Americans know the Biblical creation myth, though few can explain why the book of Genesis contains two different versions. The Greek creation myth begins with Gaia, Mother Earth. Gaia was alone and wanted someone and created Uranus, the heavens. Together they conceived the rest of creation. Humans were first made of gold by the offspring of Gaia and Uranus, primarily Kronos. But the humans hid in the ground. Then the Olympian gods made another race of silver, but they too went and hid. Finally, Zeus made the current version of iron and we still walk the earth today.

Many Native American myths identify Coyote as the prime creating spirit. He is, fittingly, depicted as a jokester. The Crow tribe had two Coyotes: Old Man Coyote and Little Coyote. Old Coyote was lonely and said, “I wish I had someone to talk to,” and he turned around and there were two ducks. He was happy. He sent the ducks underwater to find more things and they came up with mud. From mud he made others to keep him company. All of the animals followed. He made people and showed them how to hunt and fish. Out of boredom, Little Coyote made them speak different languages and that led to conflict for they could no longer communicate. From that arose war and killing.

“The truth shall set you free; but first it’s gonna piss you off.” — Marianne Williamson

Many trickster myths utilize excretion of urine or feces to explain where things come from. The Eskimo myth of Kodiak Island has trickster Raven draw light from the heavens and a bladder that contains a man and woman. From there, humans made the earth and the things of it. By pushing and shaping the bladder, the two made the earth and the mountains. The man scattered hair about and it became the trees. The woman urinated and spit to make the oceans and the waters. Other things followed from that original creation move of the Raven. The interesting thing about this myth is that man and woman, not the Raven/God, “made” the earth and its components. This is a departure from theistic creationism.

The Omaha Sioux had a creation myth that points to the power of thought as a causative agent. Wakonda, the Great Spirit, was all that was. All things, humans, plants, and animals existed only as thoughts in the mind of Wakonda. But humans wanted to take form and so they left to find a place to be. When they thought that thought, they tried the sun but it was too hot. They tried the moon to no avail. Finally coming to earth, mankind found only water in all directions. At one point, a rock emerged from below the water and spewed forth fire and the continents were created from the volcano. Humans had a place to live and were grateful.

The Nup tribe of Nigeria has a myth that explains death as well as creation. First God made turtles, humans and stones. When they would grow old, they would just become young again. But the turtles wanted children so God gave them procreation but warned they would have death too. They chose it. Humans also chose to have children and death became part of their life as well. The stones learned from those two and chose not to have children, thus not dying.

Grecian Formula. Plato taught a view contrary to the Greek pantheistic creation. He explained there are two worlds and only one is real. One world is of ideas, the abstract mind. The other was of the senses.

In the mind, all things can be perfect if thought that way. A circle can be perfect in the mind but when translated to form it fails. All things in form are transient. Ideas though, can be permanent. Plato, at odds with the establishment, maintained the world of mind was real; the world of form was illusion. He encouraged the study of science and the physical cosmos.

The list of primitive creation myths is at least one to a culture. If one is factual, which one? If form is illusion, what’s it matter? It’s still myth. Newer creation myths fit the same profile. As stronger telescopes develop, our belief in a cosmic explosion as primordial creation grows. The question still arises: where did that First Energy of the Bang come from?