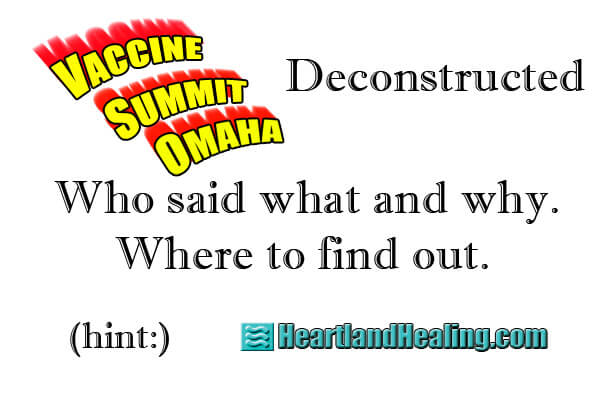 So they came to Omaha to the Baxter Arena to hear the facts. Resources and links to the events will be posted at VaccineSummitOmaha.com. If you missed it, here’s how it went.

The Quarterback. On Thursday, April 6, Toni Bark arrived in Omaha. She is a medical doctor and homeopath who practices in Chicago and happens to be a fervent expert on the subject of vaccine safety and efficacy. Dr. Bark is a delightful bundle of energy and after arriving sat with Vaccine Summit organizers to just past midnight talking about the upcoming weekend and the past weekend she had spent in Washington, D.C. with a panel of similar experts, including Robert Kennedy, Jr., an outspoken critic of the current vaccine state of affairs. Heartland Healing, the Omaha Health Expo and the Universal College of Healing Arts sponsored Dr. Bark’s visit to Omaha to take part in Vaccine Summit Omaha and deliver the Keynote Address.

During the week prior to the Summit, both Dr. Bark and local doctor Paul Hayes, M.D. appeared on Omaha radio. Links to both recordings will be posted.

On Friday morning, Dr. Bark appeared (too briefly) on KMTV’s The Morning Blend, talking about the Vaccine Summit. And Friday night, UCHA hosted a VIP event at their beautiful facility in Florence. The VIP event was supposed to be a ten or fifteen minute talk by Dr. Bark that turned into a vibrant hour-long talk to a spellbound group, followed by an interactive Q & A. That was just the appetizer for what was to come.

Saturday’s Shindig. The tenth annual Omaha Health Expo was destined to be the most energetic and exciting. The list of speakers, discussion groups and presentations was remarkable — even before considering Dr. Bark’s keynote. At a later date we may post as much as possible from the other speakers but our focus right now is connecting you with the information and energy that Vaccine Summit Omaha brought.

The idea for the Summit first arose in discussions of the OHE Steering Committee during weekly meetings leading up to OHE2017. Founder and promoter Bob Mancuso organized the Committee to lead the mission of the Expo. Including Paulette Genthon and Julie Lesser from UCHA, Dr. Patricia Ryan, Sandy Aquila from the OM Center and myself, we began to formulate the idea of Vaccine Summit Omaha in February. Dr. Bark has been at the forefront of the vaccine issue for years and has appeared in several documentaries, speaks around the world about vaccines and produced the documentary “Bought.” It was after seeing Dr. Bark in the recent mega-documentary, “Vaccines Revealed” that I made the decision to bring her to Omaha as Keynote. The Committee agreed and the details emerged.

At the Expo, Omaha researcher Adam Fogarty delivered the first of the presentations about vaccines on Saturday morning, including a Powerpoint with references and citations. A version from Sunday is posted on the Vaccine Summit website resource page.

The Keynote address staged at 1 p.m. and a rapt audience was eager to hear Dr. Toni Bark. Dr. Bark is an engaging and energetic speaker who handles a complex, multi-faceted topic with linear aplomb, displaying the expertise gleaned from years of research. While organizers did not capture a video of the Keynote, there is an audio file available and will be mounted on the resource page soon. Other resources and media will be linked as well.

Immediately following the Keynote, the stage was set for a Panel Discussion featuring local doctors. This is an important part of the equation because it is often daunting for anyone who questions whether to follow the rote dictum of mainstream medicine and government agencies. And a mom or dad who has valid concerns about the safety of vaccines often feels isolated and unsupported. Listening to the questions of the people in attendance confirmed that. That’s why they need to know there is local support.

Sitting on the panel were Jeffrey Meyers, D.C.; Patricia Ryan, M.D.; Toni Bark, M.D. and “Jenny C.” Each panelist had a unique yet connected perspective that helped inform. Jenny is a local mom who isn’t looking to promote herself so we chose to keep her full identity undisclosed. Her story involves her experience in law enforcement as a member of the department that was charged with investigating infant deaths. She became concerned about the connection between SIDS deaths and recent vaccinations which she had to document as a police officer. Her story, as a mom who subsequently decided to homeschool and not to vaccinate, is compelling and resonated deeply with the moms attending the discussion.

Many of the questions from the audience were fraught with emotion. It became clear that there is a large and growing population in Omaha and in the country that wants better answers about the dangers of vaccines and their effects. That is the challenge this group of presenters is determined to address in the future. Stay tuned.