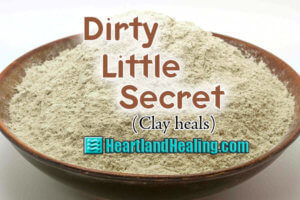 Legend tells of a convicted prisoner in the 16th Century who was condemned to be hanged. In a burst of inspired self-preservation, he struck a deal with the court.

“Kill me if you must,” he told them. “But let me drink poison instead of hanging; as long as you allow me a dram of terra sigillata with the dose.”

Terra sigillata is the legendary medicinal earth taken from a clay bank on the Mediterranean island of Lemnos. History described its ability to neutralize poisons and toxins in the body.

Supposedly, in the interest of science, the court agreed and executed the sentence, feeding the prisoner six times the needed dose of mercuric chloride necessary to kill a man. As they promised, they also allowed him his terra sigillata.

The prisoner did not go unscathed, cramping painfully as the poison and the antidote battled in his belly. But he did survive and left prison to live out his days a free man.

Clay Achin’ The medicinal and therapeutic powers of dirt have been known and used by indigenous peoples throughout the ages. At first it may sound counterintuitive or even disgusting to modern-day Americans but eating dirt or derivatives thereof is not as uncommon as one may think. And there is proven therapeutic benefit in under proper circumstances.

According to authors Robert and Michèle Root-Bernstein in Honey, Mud, Maggots, and Other Medical Marvels, modern experts have analyzed the clay from near where ancient terra sigillata was produced and found that it does indeed have the ability to neutralize poisons. Though plain dirt may sometimes have beneficial qualities, the kind of dirt comprised of fine particles of mineral sediment and called clay is the most frequently used.

Different clays from different sources have various qualities and not all are beneficial. The very characteristics that can make one type of clay healthful to us may make another type unhealthful. Primitive cultures had the advantage of time-tested use. The American Indians of the southwest knew which clays to mix with acorns (inedible by humans unless treated) to remove naturally toxic tannins. They used it to treat stomach ache. The clay from Lemnos had been written about for centuries as beneficial. Ancient Chinese, Indian and Micronesian cultures all knew where to get the good clay. Remember that before you dig up your back yard.

The therapeutic value of clay comes from various characteristics. One is surface area. If we think of clay as very fine particles, we can realize that on a microscopic level, clay exposes amazing surface area. This is the same principle that makes charcoal filters efficient. Yerba Prima, a company selling a food grade bentonite clay notes that one tablespoon of their product microscopically exposes 960 square yards of surface area. When that surface area encounters toxins in the intestine, the mechanical process of adsorption collects toxins and heavy metals to that surface. Other offending toxins, even neurotoxins, biotoxins from bacteria and distillates like pesticides, are further absorbed on a molecular basis.

With many mineral clays, there is also an electric component to the detoxification process. Clays demonstrate a cationic effect that binds up ionized materials such as many poisons, especially if the poison contains a heavy metal such as mercury or lead.

Some clays and dirts can also be considered nutritional supplements if the contain sufficiently accessible minerals or nutrients. In one experiment, astronauts were able to curtail the typical bone loss of space travel by ingesting calcium-rich clay.

Finally, the mechanical action of the clay cleansing and gently scraping the gut allows the lining of the intestine to function more efficiently.

The most common form of clay used therapeutically in the United States is a form of sodium montmorillonite called bentonite. It was named such because of its discovery near Ft. Benton, Wyo.

Rather than dig up some clay in the yard, most Americans head to the health food store. Food quality clay is available in many. One such product is sodium montmorillonite. Many companies sell similar products containing the same. One California online company, calearthminerals.com, sells the calcium montmorillonite type of clay. That is the one touted as a particularly valuable supplement, especially for calcium replacement.

Skinny dip in it Ingesting clay or other dirt, otherwise known as geophagy, is only one way to benefit from earthy healing. Topical application of clay can also detoxify on another level. In fact some clays should only be used topically if at all. After all, clay is absorbent and eating the wrong kind could absorb things best left in the body, like essential nutrients.

Processed feldspar clay is believed to draw toxins from the skin for a general overall toner. Other external applications vary. Bentonite has been used as a remedy for the highly toxic and necrotic brown recluse spider bite. An interesting account is at http://highway60.com/mark/brs/casestudy_photos.asp — don’t try to read it before eating.

Even though your mama stopped you from eating dirt when you were a kid, you still did it, didn’t you? Now you might have an excuse.

Heartland Healing is a metaphysically based polemic describing alternatives to conventional methods of healing the body, mind and planet. It is provided as information and entertainment, certainly not medical advice. Important to remember and pass on to others: for a weekly dose of Heartland Healing, visit HeartlandHealing.com.
2020.01.14