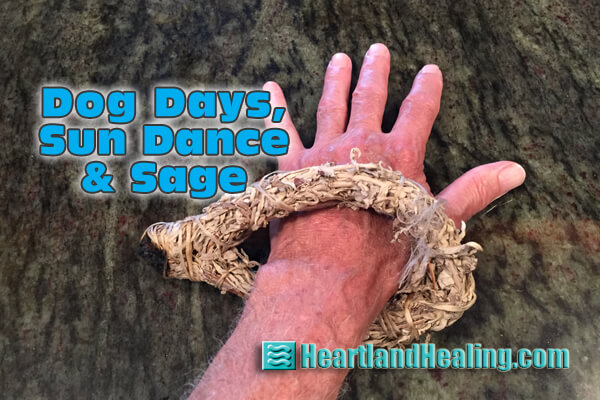 The grass is brown. The sun has dominated our lives for the past weeks. How could so human an animal not feel connected to Nature and All That Is while immersed in it for the summer?

It’s during this time we call the Dog Days that the indigenous peoples of North America have traditionally gathered for what has been called in the white man’s tongue, “sun dance”. In Lakotah language it is “Wawanke Wachipi.” The Sun Dance has existed for hundreds, perhaps thousands, of years.

The Lakotah nation once ranged throughout the northern Plains and its council fires included seven tribes: Oglala, Hunkpapa, Brulé, Minneconjou and the smaller Sans Arc, Kettle and Blackfeet. Known to white men as the Teton Sioux, Lakotah claimed the Dakotas, parts of Nebraska, Wyoming and Montana as home. The Black Hills of South Dakota were Paha Sapa, the holiest of places. Not far from the Black Hills is the present day reserve known as Pine Ridge. On a recent trip to Pine Ridge, I spoke at length with one of the tribal leaders about the Lakotah Sun Dance held this season on the western slope of Eagle Nest Butte. (At this writing, the year’s Sun Dance is just concluding.)

I am a native South Dakotan. My father was born in a farmhouse on the plains and taught me much of what he knew about the indigenous tribes of South Dakota. He spoke with the deepest respect of the culture and its connection with things natural. When you’re born in a two-room farmhouse, I think perspective of natural settings is part of your DNA.

My first authentic knowledge of Sun Dance came from my friend Antonio Walking Horse. I met him when I moved back to Omaha from Los Angeles in the mid-90s. He was staying at a neighbor’s while resting after his seventh Sun Dance with Santee Sioux in northern Nebraska. We had a long talk about it and Antonio became a good friend.

In Circles. What Antonio told me was clear. Sun Dance is a complex ceremonial gathering undertaken in the summer, usually now in late July or early August. Teepees are set, fire circles and boundaries. Sage and holy plants are gathered. Up to hundreds of tribal members meet with elders; prayers and dances take place over a series of days. The penultimate ceremony centers (literally) around the tall timber tree trunk placed in the center of the gathering. Those who have been accepted to formal Sun Dance ceremony spend their first days in sequestered areas, cared for by helpers as they fast and pray, preparing for the final ritual. They weave sage anklets and bracelets to wear. As their sweat and thoughts enter into the sage, both are held there to intensify. Each of the early days they spend dancing in the sun then retreat to pray in their teepees.

Finally, the piercing takes place. Holy men advance to each dancer and make two double-piercings in the skin of the chest, placing a piece of bone through just above the nipples. Some dancers choose to pierce the back and some pierce both. Antonio modestly showed me the scars of his piercings, front and back.

Leather tethers are firmly in place running from the top of the center pole in the middle of the ceremonial grounds. Non-participants pray, chant and drum in support of the dancers. The holy men attach the tethers to the bone spindles piercing the fronts and backs of the dancers. As the participants dance around the center pole, they tug against the tether. The day grows long. The fasting takes toll and the purification is complete when the piercing breaks through the skin and the dancer is free. If sundown arrives and a dancer is not yet free, the helpers and holy men assist in breaking the bond. Finally, the dancers retreat to their teepees with their helpers to recuperate.

The dance is done not only for the dancer but for the tribe and all of the world. To honor the Sun and its journey circling the Earth, the dancers pray for their own goals and also to exhort the Sun to return after the long winter in order to bring life back to the Earth.

The Prayer Bracelet. Antonio came to visit after his thirteenth Sun Dance just a few years ago. He had pierced front and back at each and would not Sun Dance again. When he was ready to depart, he gave me a final gift. “Here,” he said. “This is my first prayer bracelet of this Dance, my last dance with the Sun and my tribe. It has many prayers in it. It is yours.”

I have seen Antonio only once since then but his prayers are holy to me and I honor them. Occasionally at very special times and for very special needs, I use that prayer bracelet to smudge people and places. When he first gave it to me it had an extended portion almost like a handle. It has since been burned away. My new friend from Pine Ridge, who invited me to this year’s Sun Dance as an observer, told me what the handle was for.

“When a Sun Dancer is praying the Sun Dance, he cannot be touched by another. If a dancer struggles and ‘takes a fall,’” he told me, “the other dancers or helpers help him to his feet by taking the handles like so.”