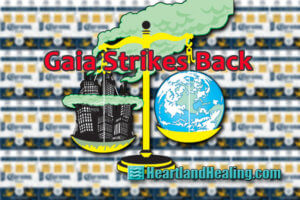 This Covid-19 virus thing? What if Earth has realized it is running a temperature, that it’s become infected and has become overwhelmed by toxins? What if Earth has identified the source as human behavior and now is doing something about it?

That’s right. There was a time we didn’t buy bottled water because we didn’t have to. Rivers, lakes, streams were safe to play in. But by the time I moved to Los Angeles in the ‘70s, the first day at Santa Monica Beach I saw an official sign that warned against eating fish caught in the Bay. Fish were toxic because of PCBs in the water. And today, there is not one stream, lake, creek or river in the United States that I know of that is untouched by human toxins. The sad fact is that humans have polluted every waterway in our country. Nearly every body of water on the planet is laced with toxins that are the direct result of humans. It’s not a pretty sight. And it’s not just the water we have made toxic. It’s the air, the soil, the plants… everything.

Earth Day, fifty years on. So this April we celebrate fifty years of observing Earth Day. The annual event draws attention to the importance of keeping our biosphere, planet Earth, inhabitable. But Earth Day 2020 will be like no other. People won’t be gathering in large numbers in parks and byways to celebrate because of a tiny virus called the Wuhan Flu or coronavirus or Covid-19. Whatever we choose to call it, it’s a virus that invades and attacks the human body. It can at least temporarily disable humans and even sometimes kills. The immediate response of the human population has been to withdraw into seclusion, to curtail human activity.

Suspension of human activity has brought some notable changes in the biosphere. Nature appears to be stretching out. Animals are reclaiming territory and the atmosphere is less toxic from exhaust fumes, airplane contrails and industrial effluents.

Gaia attacks. James Lovelock will turn 100 years old this July. He is the scientist doctor who originated what is called the “Gaia hypothesis.” It’s been overcomplicated by philosophers but in the simplest sense is the idea that the entire planet Earth can be looked at as a living being. After all, one can see that Earth has a circulatory system of ocean currents, rivers and waterways. The planet breathes, as it were, with an actual respiration rate as recorded by NASA. It has a digestive system that consumes material when its time is up and ready to be consumed and it cleanses and recycles just as any being would. Earth is alive as much as any human being is alive; as much as any being. The entire planet exists, not as a metaphor to life, but as an analog.

Might this WuFlu be nothing more than Gaia sending antibodies to attack a population of harmful invasive “bacteria” that are dumping toxins into her system and raising her temperature? Humans are the bacteria. The virus is Gaia’s antibodies; her immune system response. Gaia just wants to get rid of the infection.

As uncomfortable as it may feel, Earth has gotten sick and humans are the disease. When a biological system is overwhelmed by a population of organisms, a correction must take place. Balance must be restored. Earth has become unbalanced and the weight on the scale that is causing that imbalance is human activity.

We have to clean up our act. Now, before dismissing this revelation as anti-human, consider that it’s not the existence of humans that is necessarily at fault. It’s the behavior that is the problem. There were fewer than three billion of your kind alive when I was able to drink water from a creek in Oregon or camping in Yellowstone while on summer vacation. Now we are approaching nine billion. It may not be the raw number that is the sickness. It’s the behavior.

The way humans behave is getting Gaia in trouble and eliciting the natural immune system response from a being we should be grateful to for allowing us to share in her existence. We live in this biosphere, on this Spaceship Earth, this Gaia — whatever you want to call it. We have yet to apply common sense, compassion for Nature, humility or wisdom in correcting our behavior toward our host. She has a right, in fact, for our benefit, a need to respond. Carrying on the analogy, the application of scale, that antibody is a natural event, no matter how it came to be. We should hope that Gaia survives so that we may, also. And let this be the last Earth Day when we have been shunned by Mother Earth.