Occupying seven buildings sprawling over ten acres of Iowa farmland is the inner workings of one of the world’s leading natural medicine producers. Energique Natural Remedies is barely 45 miles from the heart of Omaha.

Energique and its associated company Apotheca Naturale are situated on the eastern slopes of the gently rolling Loess Hills near Woodbine, Iowa, population 1,410. The modern, metal, low-lying buildings are a stark contrast to the grain silos of neighboring farms. Though Energique’s buildings appear of recent vintage, and some are, the company is no upstart or latecomer to the industry of natural remedies production. Its roots reach back to 1987.

Dr. Jack Hinze, a naturopath and doctor of pharmacy literally started in a garage and the company was first called Iowa Distributing Company. Eventually Dr. Hinze sold the company and opened a clinic in Arizona. That’s when the Energique name was born as the company expanded, seven-fold in less than five years.

Factory Facts. Energique produces natural remedies like herbals, supplements and homeopathics. They are broadly called “nutritionals” but because Energique manufactures homeopathic medicines, it is officially a regulated, licensed drug manufacturer. Homeopathics were technically classified as over-the-counter drugs in the United States Pharmacopoeia by the Food, Drug, and Cosmetic Act of 1938 (sponsored by New York Senator and Homeopathic Physician Royal Copeland).

In 2007, the FDA adopted strict rules for good manufacturing practices, or GMPs, that set broad goals for companies to ensure quality and safety of their products. Companies like Energique now must meet those standards. Nutritionals have just gone through their most significant regulation in history, as a result. At Energique, most of those quality control requirements were already in place. Requirements for producing, labeling, bottling and handling a product were greatly expanded. Energique, has its own laboratory for Quality Control and every single product that goes out of the installation is rigorously tested. The same lab is used to thoroughly test every raw material or product that comes in that is used in production. If it doesn’t meet quality standards it’s rejected. In most cases, Energique’s processes exceed FDA requirements. As the doctor who oversees homeopathics production explained, in many ways, like its herbal extraction lab, Energique’s homeopathic lab goes beyond FDA standards. For example, they have to use USP alcohol, but they don’t have to use organic alcohol but they do.

A Better Way. Some estimate that 90 percent of pharmaceutical drugs owe their origin to plant and herbal remedies that have been in use for millennia. Using reductionist science — the questionable skill of tearing apart natural substances to isolate what industrialists call “active ingredients” — Big Pharma produces potent versions of medicines that often cause more harm than good. The natural remedy industry has grown by leaps and bounds. But the mistake some developers have made is to focus on isolating rather than giving a balanced ingredient. Nature makes balanced ingredients. That’s what nature does. The body is regulated to nature. We need to consume balanced stuff. It’s the true definition of holistic. The typical Western medical model of isolating the active ingredient in any biological medicine has crept in to many natural remedy companies. Not so at Energique. Energique processes use the whole biological, not just a small part. 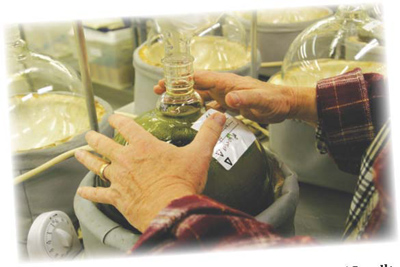 Perhaps the most remarkable part of the Energique production line is the way they extract their herbal tinctures. Extracting the active components from nature’s botanical medicines is not a difficult task. An individual can do it in the kitchen with a few supplies. But giving that same process the attention an individual would and producing it on a commercial scale requires an exceptional level of dedication. Energique displays that dedication with a proprietary method that mimics the time-honored system known as spagyric.

The spagyric process was first described by the German physician Paracelsus in the 16th century. The word itself is a portmanteau of two Greek words meaning “to tear open” (spao) and “to collect” (ageiro). It’s perfectly descriptive of the process. The process dismantles the components of the herb or botanical and then reassembles them. In other disciplines, it is known as alchemy. Energique’s system is a modern adaptation.

Paracelsus knew, and simple chemistry tells us, that an herb or natural substance does indeed have alcohol-soluble components. And it also has water-soluble components. And finally, after those two components are released, there remains the mineral or solid component. Unless an extraction process accounts for all three, something is being left on the table. The extraction method used by Energique leaves nothing on the table.

In their pristine extraction lab, Energique first reduces the whole botanical with alcohol. That can take anywhere from a day to a month. That result is set aside. Then the components are extracted with water, resulting in a second liquid solution. Finally, the remaining solid component is fired in a kiln and reduced to its final solid component. All three are then recombined into the final tincture, resulting in a botanical extract that is superior in nature, pun intended. Now you know.

For an extensive article on Energique, including exclusive photos, visit HeartlandHealing.com