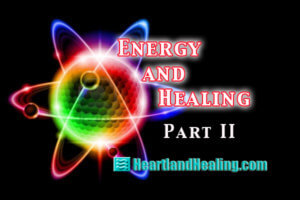 Wouldn’t you agree that in order to heal, we have to know what it is we are trying to heal? Even a conventionally trained M.D. would say that. So, now that we have firmly established through science that you, I and all the rest of us are made of energy, plain and simple, then shouldn’t we be working on that level? Rhetorical question. Look, you need to know what you are made of, so learn a little about energy.

We’ll continue with Part Two of our Energy Series. Previous entry exposed the reality that there is no debate. Everything in the world of form is actually energy and not solid matter. Our bodies, that tree, a window pane, a table, car, dog, water, mountain, diamond or dirt — none are what they appear to be to our eyes. When broken down into what science itself tells us they are, they are nothing but energy. Now let’s look at how we understand energy.

Now you see it? No, you don’t. Humans have used energy since day one. In the simplest form, we used gravity. Then there was fire, of course. Light? We used that to see things from the very beginning. Energy appears to us in many forms and with many different markers. One commonality about energy is that it is invisible. There is no exception. Energy is invisible. The only part of energy that we ever see is the effect of energy.

Noticing the effects of energy, curious humans, sometimes known as “scientists”, investigated the cause of those effects. As a case example, consider the energy we call “sound.” Sound energy has the capacity to show various effects, some noticeable and some not so obvious. A loud clap of thunder can rattle buildings and shake things. Sound can cause things to vibrate, like speaker cones or sand on a sheet of paper or drum heads or ear drums. Sound is a pretty obvious form of energy and one we investigated early on by measuring it. We found that sound fit very nicely along a spectrum of metrics relating to wave form, frequency of those waves, amplitude, velocity, phase, shape and the length of those waves. Sound is a very basic form of energy.

Pretty soon, the brighter of those curious humans started looking around at other representations of energy and began to measure those characteristics that they displayed, too. It became convenient to place those energies by name along a graph so we could quantify their characteristics. That graph is called the electromagnetic spectrum and usually lays out according to the frequency of those waves of energy.

Perhaps we should define “frequency” as it applies to energy waves. As energy waves move along, we can measure how frequently they reach a point in space. For example, if you are sitting on the beach and ocean waves are rolling in rapidly, maybe they are hitting you with the frequency of 20 waves per minute. That’s pretty slow by energy standards. The lowest frequency sound wave most humans can hear is about 20 cycles of that sound wave per second. And that’s pretty low. When it comes to music or sound, we call that frequency bass, very low bass. If the sound wave cycles lower than 20 times per second, we may feel it but our ears don’t really hear it. Our ears generally detect sound waves when they are above 20 cycles per second all the way up to 20 thousand cycles per second (also denoted as 20 hertz to 20 kilohertz). That’s from the low bass to the high sizzle of cymbals. We have adopted the term hertz to signify a wave cycle, honoring the German scientist Heinrich Hertz who proved the existence of electromagnetic waves.

“I wanna take you higher…” As the wave cycles of energy increase in frequency we no longer can hear them but we can measure them and we certainly can utilize those levels of energy. As we identified and were able to measure those various levels of energy, we were able to place them on that spectrum according to frequency and we gave them names. Up around 100,000 cycles per second in frequency (100KHz) to 1,000,000,000Hz (108 ) we call them radio or TV waves, discovered in the 1880s.

Right above radio waves in frequency are microwaves and radar, first measured in the 1890s. Placing various energy formats on that graph was relatively easy after that. As we learned to measure the frequency of radio, microwave and light, we understood their existence better.

Next on the spectrum, x-rays, around 1018 per second (that’s fast) were discovered by Wilhelm Roentgen in 1896. Then the higher gamma rays in 1900 by Paul Villard, and cosmic rays in 1912 by Victor Hess. Those are the highest frequency energy waves we have measured so far, with waves at 10 with 22 zeroes after it per second. Cosmic rays are energy that has re-bundled itself to form into those little subatomic particles and travel very fast. We are only now beginning to see evidence of energy levels higher than the measured cosmic rays discovered over 100 years ago.

So, looking with overview, humankind didn’t know radio waves existed before we could measure them. We didn’t know of microwaves or x-rays, gamma rays or cosmic rays until just a few years ago when we could measure them. We saw the evidence that they existed because they had an effect on form, even though we didn’t fully understand. It’s begging the question then: What energy will we be able to measure in the future? Hint: We already see the effect of thought. We just haven’t been adept at measuring it yet. Stay tuned.

Heartland Healing is a metaphysically based polemic describing alternatives to conventional methods of healing the body, mind and planet. It is provided as information and entertainment, certainly not medical advice. Important to remember and pass on to others: for a weekly dose of Heartland Healing, visit HeartlandHealing.com.
2019.10.01

WOW the Unified Field is THOUGHT !