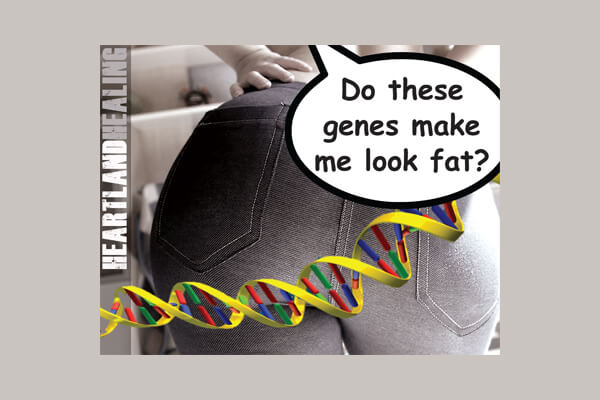 Epigenetics Redux: Do These Genes Make Me Look Fat?

I’ve noted before that a childhood favorite book was The Double Helix, the account by James Watson of the discovery of deoxyribonucleic acid as the building block of life. I was always looking for explanations and causes in those days and it seemed Watson and Francis Crick had identified DNA as life’s foundation. It was indeed a landmark moment in understanding the biological sequence over time; how worms, monkeys, insects, humans and all living things shared a blueprint.

For reductionist science, DNA explained it all: why one person has blue eyes and another brown; one person tall and the other short; one slim and another hefty. Everything, including behavior, could be found in that coded strip of adenine, thymine, cytosine and guanine locked in the nucleus of each cell. Those nucleotides made up the cryptic instruction for all that is life. How they were sequenced determined the function of the 20 thousand or so genes found along that double helix. Creation had a new god and its name was DNA.

It seemed like fate was predetermined. DNA was, is and shall be, from birth, the guiding force for the human experience. Soon, scientists were looking at genes as an indelible map. But genetic programming may not be permanent or unchangeable. Little did we know.

Dr. Watson, I presume.  A genome is an organism’s complete set of DNA material, made up of all the genes that code how that organism will develop. With much ado, the United States Department of Energy and the National Institutes of Health joined forces and finances to start the Human Genome Project in 1988, with the goal to map all the genes in the human genome. The project’s first Director was none other than Nobel Prize-winning Watson.

At first, HGP said humans have about 2 million genes. As of 2014, the number has revised downward to 19,000. That’s science for you. One decade it’s fact; the next it’s fiction.

OMG, TMI? One promise of knowing and isolating genes is to figure out the blueprints of human life and then be able to remodel or change things. For science, the expectations were huge. Genetic medicines were predicted. Advanced knowledge of the presence of genes linked to certain diseases and disabilities (or abilities, for that matter) could be revealed.

One example of presumed genetic prediction grabbed headlines when celebrity Angelina Jolie revealed she had both breasts removed because a private medical testing firm in Beverly Hills identified a gene in her DNA possibly linked to breast cancer.

Jolie chose a radical double mastectomy, also removing lymph nodes in the breast tissue. She believed that her genes predestined her fate.

A response like that assumes that the blueprint is unchangeable. That is what geneticists believed at first. Well, that, too, has been revised.

Epigenetics. Just because a gene is present in a person’s DNA sequence does not mean the result of that gene’s associated reality will show up. There are literally millions of factors and though odds may appear in one direction, things change. Are genes a permanent blueprint or not?

Science initially implied that a genetic stamp was permanent. Now science says genetic predisposition can be altered. [Note: I began to wonder about the permanence of genetic disposition back in the ‘60s when the same science that said DNA was a fait accompli then began to tell us not to smoke marijuana or drop acid because it altered our DNA. #Can’tHaveItBothWays ] What I’ve found is that, like many things, the facts lie somewhere in between.

When we’re born with a complement of genes, many things are predetermined. And some of those predetermined things may change. It comes down to what many call the new science of epigenetics.

On or off? Epigenetics confirms that having a gene is one thing. The expression of that gene’s associated trait is another. Genes exist in our DNA and there are tags that tell each gene when to “turn on” or “turn off.” For example, a gene may determine the pattern that a man’s beard will assume, how it grows or the shape of his hairline. But those whisker genes aren’t going to express until the tags on them are instructed to by adolescent hormones. Those tags themselves can be subject to environmental forces: lifestyle choices can trigger or un-trigger the expression of certain genetic traits.

For over 30 years, Dr. Dean Ornish has been researching the effect that changes in diet, exercise, meditation and social interaction have on disease. His findings first reached the public with the Ornish Heart Disease Reversal Program. Now he is applying those lifestyle changes to epigenetics. In a recent interview, he summed it up.

“In most cases, our genes are only a predisposition; they are not written in stone,” Ornish said. “And if we have a strong family history for diseases such as prostate cancer, breast cancer, or heart disease — ‘bad genes’ — then we may need to make bigger changes in lifestyle in order to help prevent or even reverse chronic diseases. In the centuries-old debate about nature vs. nurture, we are learning that nurture affects nature as much as nature affects nurture.  It’s not all in our genes.”

So genes don’t make you look fat? Having a certain gene associated with obesity, cancer, diabetes and other traits doesn’t always mean our future is predetermined. We may change the effect of genes by changing diet, thoughts, activity and other behaviors. The upshot is, there is much we can do to alter the predisposition of our genes.

We don’t have to cut off our nodes to spite our fates.