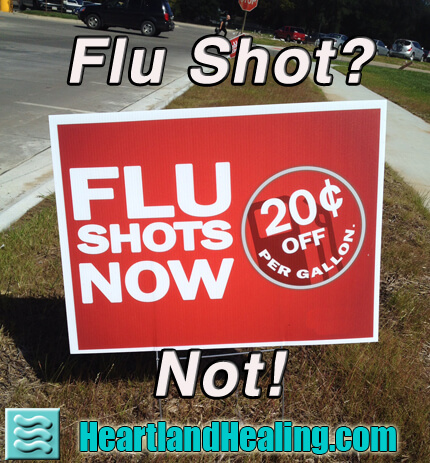 Now, off the top, it sounds like something you could live with, the promise of something you’d like to be true. Who wouldn’t want that? Just one thing. This Benz will only start four days out of ten. You got it. Most of the time it just won’t work. You can push the button, pump the gas, whatever you want. It. Won’t. Go.

And, there’s more. There’s a chance that not only will the car not work at all most the time, it’s going to cause you problems that could make you sick. We’re not exactly sure why, but there’s extra stuff in the car that can actually make it worse to own the car. Wouldn’t you be a little skeptical about this deal?

The Con. Well, every autumn the government, pharmaceutical companies, bureaucracies and even school systems and employers try to sell you on the flu vaccine. They’ve used deceptive tactics and outright lies: “The flu kills 36,000 people a year,” or “It’s still your best option to avoid the flu,” and anything else they can get you to believe. The latest I saw was, “Even if you don’t get the flu, the vaccine can help keep you from spreading it.” Completely false and designed to scare you into getting the flu shot.

“Okay,” you might say, “Getting four chances of safety out of ten is still better than zero.” Agreed. If that’s what you actually got and if an organization is willing to lie about statistics in one area, think maybe they might lie in others? Think maybe the vaccine might be zero effective?

And, as for that 40 percent protection, if it were true? Is that consequential trade off worth it? Find out what is really in the flu vaccine (and others, for that matter) and then answer that question. You will read that they range from swelling, pain, nausea to complete breathing problems and anaphylactic shock. That kinda stuff kills.

So, to paraphrase Dirty Harry, “Do ya feel lucky? Well, do ya?”

Go natural. Studies show that natural immunity is far superior to any perceived immunity from a poke in the arm. And a number of things can help boost that.

Herbals. So when flu season comes around, I start with two different herbals, Echinacea angustifolia and Chinese Astragalus root. I don’t mess with capsules or powder. Properly brewed tinctures are preferred. Tinctures drawn in the spagyric method3 are the most effective. I use a brand called Energique. It’s been made just up the road from Omaha in Woodbine, Iowa.

Old School. One of the things my dad taught me was to gargle with warm saltwater. There was a saltshaker in our bathroom medicine cabinet and he did it most every morning. Something about saltwater does it. Ask any surfer with a cut who gets in the water and sees it heal by the end of the day.

The ayurvedic practice of neti is also highly effective, especially when the sinuses are involved. But nasal irrigation is tricky. I don’t recommend the Western method at all. Learn the actual ayurvedic way.2

Honey and lemon in hot water is another protocol to stick with. Honey is a known antibiotic and lemon an astringent. Both would tend to lower the bacterial and viral load in the buccal cavity.

And speaking of old school, ask your acupuncturist about a Chinese solution called “Jade Screen.” If they give you a quizzical look, get a new acupuncturist. I mean it.

Olive Leaf and Oregano. Olive leaf extract is a botanical gaining popularity as an antibiotic. My preferred use is to place 40 drops in a shot glass of pure water. Gargle with half of it then swallow. Drink the rest. Oregano oil is also an effective antibiotic I would use similarly.

In any case, there is rarely a need to resort to drugs to give the immune system and the body the ability to reclaim health. Keep these tinctures and items on hand. They don’t spoil. Then you at least have the option to use them.