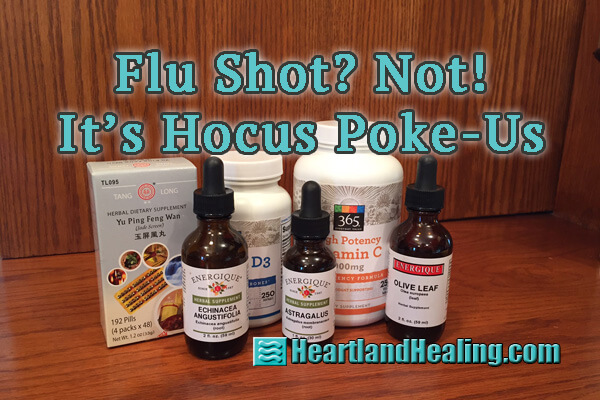 Look, we covered a lot of this just a few weeks ago but people keep asking so let’s review. How is it that we have to go over this every year and sometimes, every week? I’ll tell you. Because the drug companies, pharmacies, grocery stores, media, employers and confused people in every walk of life keep trying to brainwash us with faux flu fixes.

Earlier Heartland Healing columns clarified the misleading and downright false claims about flu shots and flu data so we don’t need to repeat that other than just a brief brush up then get on with it.

The oft-cited “36,000 people die of flu each year,” is a baldfaced lie. “Flu shot is still your best defense against getting sick,” follows close behind in the propaganda column. And the peer, social and employer pressure to impose a faulty vaccine and philosophy is absolutely abhorrent. I personally would be all for it… if it worked, if it were safe, and if it made any sense at all.

Truth be told. Even the propagandists can’t completely hide the truth and they don’t really care because they shout louder and more often. As an example, they do it enough so that we ignore those horrifying disclaimers at the end of every drug commercial we see on TV: “May cause bleeding, fever, heart disease, cancers, irrational suicidal and homicidal thoughts, nuclear war, solar apocalypse. Check with your doctor.” Still we buy up their BS. And remember, the United States is the only country on the planet (okay, with New Zealand) that allows direct-to-consumer advertising of pharmaceutical drugs. With all those commercials, who wouldn’t want to take something that will kill them eventually just to remedy a little heartburn so they can eat two chili dogs instead of one — or none?

Flu shot won’t work. They admit it. So now come news reports that this year’s flu vaccine probably won’t keep you from getting the flu at all.1 At least they admit it. Let’s also remember that the Centers for Disease Control admitted last year that the vaccine was only 13 percent effective in 2016. Can it get worse? Apparently. So, what’s a girl to do? (Besides never, ever, ride in an elevator alone with Matt Lauer or Al Franken.) Here’s what some healthcare practitioners recommend.

Jade Screen — I love the very image this Chinese medicine conjures: fortifying your immune system by building a jade wall around it (“Build. The. Wall.”). Jade Screen is a composite herbal supplement I’ve gotten from my herbalist and again from my acupuncturist. It’s used to protect the body from viral attack, just like an impregnable jade screen would do. The primary ingredient is a variety of astragalus and is blended with siler root and bai zhu . There are few supplements that garner the rave reviews that Jade Screen gets. Most accomplished acupuncturists (including Joel Dunning, L.Ac.,)2 will know what you’re talking about when you ask for it.

Chinese Astragalus Root, tincture — I got a cold once. It was 1990. I was living at the foot of the Verdugo Hills in Burbank and got a visit from my longtime friend Carin Berger, wife of Hollywood director and ex-Texan Tobe Hooper (Texas Chainsaw Massacre, Poltergeist). Seeing my sniffles, Carin told me Tobe had been laid up with a horrible cold for two months that just kept coming back. But after she learned about astragalus and got him some, poof! it was gone in a couple days. It didn’t take me long to try that and it worked the same for me. Powerful stuff. (“It’s he-e-e-e-r-e.”)

Echinacea There are a couple different species within the genus, angustifolia and purpurea.  Echinacea is actually the common coneflower. You see it all over the Great Plains and native Americans used it extensively. The species common in America is angustifolia. Nearly all reliable sources say to look for that source of tincture as it’s stronger, more direct and versatile. Not only is it good for flu, colds and so on, it seems to work for general infections, too. My sister, the OB/GYN herbal skeptic had a lingering strep infection in her knee. Strongest antibiotics on the planet weren’t touching it. Amputation wasn’t out of the question. Gave her some. Worked. No longer a skeptic. As for tinctures and herbals, look for a brand called Energique. It’s been made just up the road from Omaha in Woodbine, Iowa for the past 50 years or so. I’ve visited the plant, observed the system and quality-control and trust the product.

Others. Gotta steamroll here so check out the items on this list. Olive Leaf and Oregano extracts: Both botanicals are antibiotic. Many holistic farmers even use them with livestock and poultry. Vitamins C and D3 : You already know about vitamins. Use them. Neti and gargling: The ayurvedic practice of neti is highly effective, especially when the sinuses are involved. But nasal irrigation is tricky. I don’t recommend the Western method at all. Learn the actual ayurvedic way. Ask a very experienced yoga teacher. And Dad always did a saltwater gargle in the winter, each morning. I never, not once, saw my dad with a cold or even sick, for that matter, though he was a bit salty at times.

So, if the American docs are already saying their hocus-poke-us won’t work, don’t you think you should think it over?