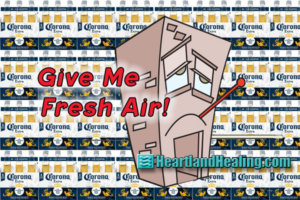 A Breath of Fresh Air

We’ve done it to ourselves since the beginning of time. Roughly allegorized in the Bible’s Book of Genesis as “eating from the Tree of Knowledge,” mankind’s first sin was duly noted as thinking we know better than Nature or God or the Divine Plan, whatever you want to call it.

Human hubris embraces the idea that if we think we can do it, we just go ahead and figure our way is better. We too rarely stop to ask if it is appropriate that we do. We don’t live in harmony with Nature. We live to dominate Her. With few exceptions, the Eastern tradition of medicine and health being one, the Western “scientific” model thinks it is all that. Well, it isn’t. And sometimes its own acolytes serve notice that our way of thinking is all wrong, even providing proof. That was the case for research into air circulation and hospital acquired contagion of respiratory illness. (1)

Violations of common sense and observable fact have resulted in some of the most grievous errors we make. We pay the price in the case of basic functions of the human body. And one of the basic functions is that of maintaining health. The body, nature, knows how to do that. Very little intervention is actually needed. If we just get out of the way in many cases, healing is reached as a course of nature.

The air error. Little could be more basic to human existence than breathing. Without breathing, the body lasts about three minutes before shutting down. Fortunately our biosphere provides the atmosphere that sustains that activity. The gaseous balance is complex but not beyond Nature’s ken. And that atmosphere contains more than gases. It holds and circulates probably millions of essentials for our own elemental needs. We breathe in biologicals — some good, some bad — and even the bad ones serve a function. They test the ramparts of our defenses so the body knows where reinforcements are required.

Then along came human technology and the idea that we could blend and control the atmosphere better than Nature. We closed our windows and installed machines that filter, temper and recirculate the atmosphere in our buildings.

Our cultural dictators declare that our version of breathable air is better than what Nature provides. And we continue to pay the price.

Bad building. Since the 1980s or maybe even before, we started designing buildings with sealed windows. What a relief from the summer heat, we thought. Air in our buildings became the conditioned, filtered, recycled version of outside air. Fortunately some of us know that isn’t always the way to go.

It may seem like common sense to some of us. Having access to fresh air is better than being cooped up. Throughout time, when a person was sick, sunlight and fresh air were known to be beneficial. In the antebellum southeast for example, homes were often built with large rooms on the third floor with windows all around that served as sickrooms in time of need. Adequate air and light, with rare exceptions, help in the healing process.

In the 21st century though, one is hard-pressed to find a commercial building that allows for open windows and fresh air. Worst of all, that holds true for the very buildings where we send our sick: hospitals and extended care facilities.

Compare. In 2007, a study was published that compared a simple factor. Which hospitals had higher rates of airborne spread of infection, ones with open windows or ones that are sealed shut and relied on mechanical ventilation and atmospheric control?

No surprise. Hospitals that were sealed shut, fitted with “negative-pressure respiratory isolations rooms,” had a much higher rate of hospital-acquired infection. To quote the research, “Opening windows and doors maximises natural ventilation so that the risk of airborne contagion is much lower than with costly, maintenance-requiring mechanical ventilation systems. Old-fashioned clinical areas with high ceilings and large windows provide greatest protection.”

Go figure. So it has come to pass that a “pandemic” has settled across the globe. A respiratory illness causing death and providing challenges to sanity rose out of China to infect the world and send the susceptible to hospitals.

To be sure, fresh air isn’t a panacea. But common sense and tried-and-true realities are; at least until time unravels the mortal coil. Facts are facts and one sordid action resulted in thousands dying as they were condemned to restrictive and confined long-term care facilities that had no access to fresh air. It is no mere coincidence that close confinement with uncirculated fresh air gave rise to increasing mortality rates. Humans think we can control things better than the system that was provided us in the first place.

Certainly there is more to the story than just fresh air. But certainly we can do better if we just pay attention. And perhaps stop eating from that Tree.

Heartland Healing is a metaphysically based polemic describing alternatives to conventional methods of healing the body, mind and planet. It is provided as information and entertainment, certainly not medical advice. Important to remember and pass on to others: for a weekly dose of Heartland Healing, visit HeartlandHealing.com.
2020.07.21