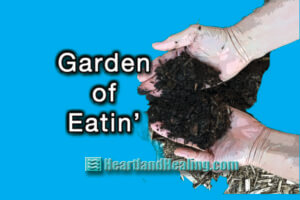 When technology fails, when the grid goes down, when the dollar and the economy collapse, you’ll still want to eat. Will you know how? Supermarkets won’t help. With trucks at a standstill, within hours after the crash, store shelves will be bare. With electric power a thing of the past, your freezer and refrigerator will be more useful as an armoire than for food storage. Your home reserve of Ramen noodles will last for a while but that stuff in the fridge is as good as gone.

Unless you’ve prepared, you’ll find yourself hungry within a couple days. If you don’t know how to forage, you’d better be close friends with someone who does. Mormons, Amish and other groups that embrace stockpiling as part of a philosophy may see waves of converts seeking a place at the table. Self-reliance is a religion with them.

It sounds dire but we’re a razor’s edge from the Grand Cull. Signs have become omens have become warnings and millions of lives could be in the balance when such a collapse throws a country into chaos. Take a look at Haiti.

I’ve long said that I’d rather be happy than right but then again, I’ve been right so often I may as well learn to be happy about it. Cast my bleak assessment aside and there are still ample reasons why people should be growing at least some of their own food.

On a cheerier note, humans are programmed to survive and though we’ve spent the past century and a half on an onanistic march away from Mother Nature, it’s in our DNA to rely on and stay connected with Earth.

Dig it. If you feel blue, go play in the dirt. Scientists have found that a common, harmless bacteria living in healthy soil, Mycobacterium vaccae, can relieve depression and increase happiness.

In tests, exposure to M. vaccae relieved signs of depression both in humans and in laboratory animals (sad rats?). The mechanism is not understood by the science guys but they suspect that somehow, some way, M. vaccae cause the brain to release serotonin, the “feel good” brain chemical. Researchers suspect the bacteria are affecting immune system cells causing a release of cytokines. These in turn may stimulate brain neurons to release serotonin.

M. vaccae has been the center of many studies recently. Early childhood exposure to the bacteria has also been shown to reduce the incidence of adult onset asthma and allergies. That finding supports the “hygiene hypothesis,” that is receiving growing support. We have made our surroundings so sterile and protect our young from bacteria so obsessively that it weakens and compromises our immune system which explains the increase in childhood allergies and asthma.

Using antibacterial soap is not only dumb, it makes you dumb. Further studies by scientists on M. vaccae shows that the bacteria may make you smarter. Mammals exposed to the live bacteria performed much better in intelligence tests.

“This research suggests that M. vaccae may play a role in anxiety and learning in mammals,” said one of the researchers. “It is interesting to speculate that creating learning environments in schools that include time in the outdoors where M. vaccae is present may decrease anxiety and improve the ability to learn new tasks.” Oh, and remember, the feel-good bug is only in healthy soil, not sprayed with killer chemicals.

Just eat it. The sun is at the perfect angle, the weather is cooperating, so get out in the yard or on the balcony and start your own food chain. It’s easier than you realize if you recognize Mother Nature as a partner and not an adversary.

Start with some of the easiest and, coincidentally, most healthful, garden plants to grow: Swiss chard, kale and spinach. You actually could have started these crops outside a few weeks ago but it’s just as good to do it now.

These leafy greens are the most nutritious veggies you can grow and they could provide you with food all the way to Christmas if you play your cards right. Once the leaves reach about 6 to 8 inches long, you can start harvesting the longer ones on the outside of the plants. Use a scissors or sharp knife. The leaves are easy to rinse and the smaller, tender, younger leaves can be eaten fresh in salads. Don’t boil greens (that goes for collards, too). You’ll leach out most of the nutrients. Just steam them lightly. (An exception is poke.) A little organic butter or balsamic vinegar and wow, good food. You can keep harvesting these plants through the summer and autumn. They even do well in big pots on the balcony or patio for apartment dwellers. Plant a cherry tomato in a big planter and you’ll barely be able to keep up with the harvest.

Need a nudge? Head out to a farmers market, pickup some starter plants and ask a farmer for growing advice. Oh, and get a guitar. When the grid goes down, you’ll still want music.