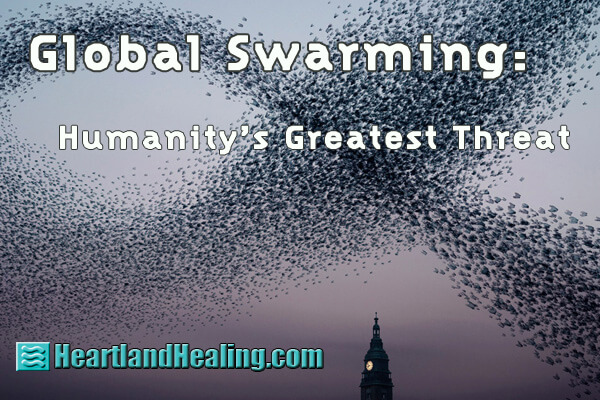 The word is murmuration; one of my favorites. Sometimes I just like a word for being a word — how it sounds or how it looks or the thought picture it gives me when I say it out loud. Murmuration is one of those. Its etymology is the feminine gender, third declension Latin, meaning “low grumbling.” I’m not exactly sure how it got its modern meaning of representing a flock of birds swarming. Maybe it reflects the whirring sound that a spinning flock makes in flight.

A murmuration is different from an flock of birds flying toward a destination. You’ve likely seen a murmuration. They’re common in autumn, perhaps a test flight for migration. If you haven’t, check out this YouTube video. You will see a precisely choreographed swooping and turning group of thousands of birds in flight, going nowhere. It appears to be undirected and certainly is unconscious because a conscious mind of any sort could not account for the rapid, abrupt and close turns.

“You don’t need to have a point to have a point.” — Harry Nilsson On a broader scale, murmuration is part of the natural phenomenon known as swarming behavior. Swarming behavior is observed in many different phyla of the animal kingdom and its point isn’t clearly understood. It appears however to be mindless, purposeless movement in one direction, then another and another as a fluid, rapidly changing mass. All of this rapid movement is done without touching the being alongside. One interesting theory proposes that swarming developed evolution-wise due to something known as “selfish herd theory.”

Mindless barely covers it. When I got my first computer in 1983 I could care less about hard drives or storage discs or anything. All I wanted was a modem to get “out there” and connect with whomever else was “out there.” At the time, the only connections out there were with a small number of universities and through a company called CompuServe, known as CIS. We could even send text-only messages to other CIS subscribers and nexuses using a crude email system. My first “email” address was 74356,88. There were few people to connect with at first but I felt an overwhelming drive to reach out and touch someone, at least electronically. (I have a theory that it’s human nature to want to affect things at a distance. More on that in the future.)

“Slowly I turned, step by step…” — Three Stooges  Things changed by the mid-90s with the development of the World Wide Web and what we know now as the internet. And finally, with “social media,” we humans are more connected than ever. Television, radio, telephones seem archaic by comparison and became outdated overnight. Now we can barely take our eyes and fingers off our smartphones, iPads and laptops long enough to cross a street or eat a meal.

For the first time in human history, a single idea or thought or image can reach millions and be shared by millions, along with each of those millions commenting. We bounce ideas and memes off of each other, eliciting comments, literally at the speed of light. All without touching those with whom we move. We swarm.

A news report, an image, a video or a GIF catches the eye of a critical mass of humans on social media and we have that shiny object that we say “goes viral.” It could be a political meme, a horrifying image, a clever GIF or anything. But in humans it triggers a mental version of swarming.

The most intoxicating of the shiny objects are those that raise emotional anger. Like a swarm of angry bees or fire ants, humans on the internet can whirr mindlessly in response to a news story cast with the patina of credibility. Humans swarm for an imagined slight to one class of people or another. They swarm at the sight of an orange-haired former reality TV host. They swarm at a news report, true or not. They swarm at the suggestion that some politician wants to give them something for free. They swarm at whatever the Swarm Directors offer up next.

DEVO Swarming isn’t rational and does not depend on truth or accuracy to persist. Once a swarm is underway, it has become its own energy. A swarm forgets bigger picture arguments, concerns or ideals. A human swarm is mesmerized by the shiny object, usually attached with self-righteous anger. Intellect becomes used as a justifying data-gathering device to rationalize an untenable position. Entropy takes form in the unlikely cloak of order as humans dance online in a tumbling rush of synchronized insanity.

It’s too soon to tell, but I get the feeling swarming isn’t something humans are supposed to do, certainly not with the anger and irrationality it assumes. As that band from Akron warned decades ago, we may be on the path toward de-evolution, gone without a murmur.