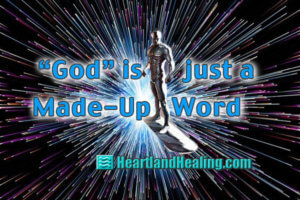 God is Just a Made-Up Word

A long time ago, I happened upon a book in the children’s section of the old Omaha Public Library on Harney Street. It was actually the very first book I ever chose by myself to read. I found that significant because all the previous had been handed to me by adults. This book found its way to me all by itself. The book was “Our Friend the Atom” by Walt Disney and German scientist Heinz Haber. From that book I learned the undeniable truth that every single portrayal of reality in this Universe is nothing but energy. That’s not opinion. That’s a fact of physics. And it helped me understand.

With half a billion atheists in the world, I’ve had occasion to run into a few. My premise is that they’re not really atheists. They just don’t know what to call “God.” I’m here to help.

What I learned from “Our Friend the Atom” was something that is simple science: Energy is everywhere. There is no place in the Universe where it is not. And later, understanding more fully what college physics told me, there is nothing other than energy. Realize that scientists are still trying to find “matter.” The deeper we get into nuclear physics, the more elusive solid matter becomes. We keep finding smaller “particles” in atoms — quarks, leptons, bosons, mesons, gluons and muons and on and ons. Look inside these particles and you find smaller particles. All these particles are separated by energy fields and clearly, finding one that is solid, is and has been the endgame not yet reached. Find a new particle, open it up and it’s just filled with energy. Then find another tiny particle in that sea of energy and it continues, like nested toy dolls. It’s all energy, folks.

That same energy flows through the entire Universe. It expands, never stops, includes everything. There is no where that it isn’t. It is in your body and understanding the above, it is your body. You are that energy.

On the Jump So let’s go to another area of science. Your human body is made of about $2000 worth of chemicals like carbon, hydrogen, calcium, phosphorous and so on. You’re just a lump of stuff. Yet again another undeniable fact: you have consciousness. Right? At least admit to that. So, you are a wad of energy that has consciousness.

Here comes the only need for extrapolation that I will ask of you. If you are a field of energy (fact) and you have consciousness (fact) then is it a surprise to surmise that the Field of energy that persists through the entire Universe has Consciousness also?

(Quick trip into more physics: Physicists have long searched for the commonality that will link the four fundamental observable energies: gravity, electromagnetism, strong nuclear force and weak nuclear force. That singular energy that covers the reductionist versions is referred to as the Unified Field.)

Coincidentally, many of the descriptive characteristics that various religions attribute to a version of “God” can also be attributed to the Unified Field.

Playing with words. So what’s in a word? Someone came up with the three letters strung together that end up being the “G” word. And there are many other words that various cultures have used in place of the “G” word. What if an atheist simply replaced the concept of “God”, which he doesn’t believe in, with the term “Unified Field” which according to science, he has to believe in? If I were an atheist, I’d try it.

I never had to call myself an atheist because I made the jump straight from the “Baltimore Catechism” version of “God” to Einstein’s (and Walt Disney’s) version of “Unified Field.”  I had no problem accepting a Form of energy that pervades and includes my existence and that of everything else in the observable Universe. For years, I used one term or another to describe that creative force that permeates and sustains all things: Universal Life Force, Unified Field, Creative Energy. Eventually those terms just became unwieldy so I picked an easier one: God.

Life with energy. Let’s keep going on that theme. Your thoughts are energy, too. Trouble believing that? Well, ever heard of an EEG? Brain waves? Okay, you’re almost there. Thought is energy, then; measurable, observable energy. Energy exists in waves and has several characteristics, including phase, amplitude, frequency, shape, velocity, wavelength. All energy has those. And different expressions of energy can be adjusted to synchronize with other ones. Anyone who’s ever driven a boat with two outboards has learned to sync the engines. Anyone who’s ever tuned into a radio station has made use of synchronized energy.

If you learn to harness and direct your thoughts (energy), to choose them and their characteristics, you may synchronize the energy of your thoughts with the energy that is around you, including that Unified Field. Western science hasn’t made that entirely evident to the hoi polloi but now you know it. Learning how to tune the characteristics of your thought can be described by any word you decide to use. Select from many; meditate, flow… even “pray.”

Atheist is just a word. Learn to surf the Universe and you can stay on your board until you reach the beach. That’s the goal, isn’t it? Then paddle out and catch another wave.