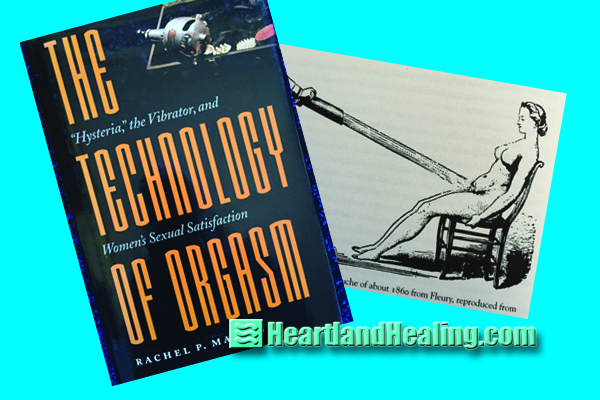 “I’m pickin’ up good vibrations, they’re givin’ me the excitations.” —The Beach Boys

Each day in the news we read about medical discoveries promising cures for any number of human afflictions. Yet disappointment comes easy. Wars on cancer, obesity, Alzheimers fall by the wayside even as Dimes keep Marching along.

However, modern medicine has succeeded in eliminating one scourge, once epidemic in the 1800s, that struck women of child-bearing years, whether married or single, young or old. The disease was known as “hysteria.” This disease caused numerous visits to the doctor for temporary cures. In fact, by 1890 or so, these patients comprised a significant proportion of many a physician’s practice.

Most of us understand the word “hysterical” in its more modern sense. We take it to mean the idea of something uncontrollably funny or absurd or emotional to the extent of upset. That is the connotation only recently given the word in the last 50 years or so.

It’s a Woman Thing. Literally translated, hysteria means “out of the uterus.” For centuries, medically speaking, hysteria meant “womb disease.” The symptoms have been well documented by famous physicians dating to Hippocrates, Avicenna, Galen, and Celsus in the classical period and Freud, Charcot and others in more modern times. Just as hyster-ectomy refers to the removal of the uterus, hyster-ia is a disease associated with the uterus. It’s a woman’s disease. Symptoms of hysteria were easy to spot: According to medical descriptions past, hysterical women displayed irritability, anxiety, sleeplessness, nervousness, sensations of heaviness in the abdomen, lower pelvic edema and erotic fantasy. Medical science reasoned that the uterus had become engorged, causing discomfort.

Doctors throughout history knew of only one cure for hysteria. The technical term for this cure was “uterine paroxysm,” literally a contraction of the uterus. A uterine paroxysm was the only known relief for hysterical women and it would leave them relaxed and serene. A uterine contraction or paroxysm is known in other words as an orgasm. That’s right. The prescribed cure for the well-documented disease known as hysteria was orgasm. Hysteria was the disease. Orgasm was the cure.

Medicine is often clinical and sterile. Though medicine refrained from officially relating “uterine paroxysm” to sex, many medical recommendations referred bluntly to having an hysterical women go home and have her “husband take care of her.” In short, throughout the history of medical practice, female hysteria was thought to be the result of sexual deprivation. It wasn’t until 1952 that the American Psychiatric Association officially removed hysteroneurosthenic disorders from its list of modern disease paradigms.

Get a buzz on. Scholar and author Rachel P. Maines has documented this bizarre outlook on female sexuality and the strange practice of medicine that was common a hundred years ago. In her book The Technology of Orgasm – ‘Hysteria’, the Vibrator and Women’s Sexual Satisfaction (The Johns Hopkins University Press.) Maines provides a detailed and well-researched look at a mind-boggling view of sexuality, health and technology. Maines describes the standard way of looking at sexuality as “androcentric” and correlates the identification of hysteria as a woman’s disease treated in a clinical fashion with a social mores that has been like a shackle for centuries.

As absurd as this whole thing sounds, by the 1890s a diagnosis of hysteria brought millions of women (and millions of dollars) to doctors for the cure. The treatment performed by the doctor in his office was literally manual massage of the female genitalia until “paroxysm” was reached. Doctors complained that sometimes that took upwards of an hour. Most doctors could take out an appendix faster than they could give a patient a “paroxysm”. But when accomplished, relief was nearly 100 percent – until the next time the patient became “hysterical.”

A large part of many a physician’s practice in the late nineteenth century was made up of hysterical women. Maines notes that there is no evidence that the doctors enjoyed their work of giving women orgasms. In fact, quite the contrary according to Maines. Doctors often lacked the patience or interest to spend the required time with patients to give them relief from hysteria. Assistants, nurses and office staff were enlisted to perform what doctors (and many husbands of the period) saw as a tedious task.

Shower Power. As Maines writes, doctors wanted to provide their hysterical patients with relief but not at the cost of the time and skill required. They resorted to various methods to speed the process and relieve themselves of the work. The first method tried was focusing a stream of water to do the massaging. Hydriatic massage, as it was called, was successful but required considerable office modification and was messy. Mechanical devices using treadle power, spring power and even steam power were developed to provide a consistent vibration to the desired area of the body. Massage was therapeutic for other ailments besides hysteria, but doctors found the vibrating massage was perfect for producing orgasm – er, – “uterine paroxysm.” One steam powered device had a vibrating mechanism suspended beneath a therapy table with the operative attachment protruding through an opening where the patient would place the pelvic region. Most of these early vibrating devices were awkward and required a doctor’s capital investment that even a large patient-base of hysterical women couldn’t justify.

But in 1880, British physician Joseph Granville developed a battery-operated electromechanical device that was easy to use and effective. There was a selection of “vibratodes” that allowed it to be used for any number of therapeutic purposes. Derivations of Granville’s invention became standard equipment in clinics throughout the Western hemisphere. Medical exhibits at the Paris Expo in 1900 displayed over a dozen therapeutic vibrators. Ads, articles and textbooks published around the turn of the century extolled the vibrator’s time-saving and labor-saving qualities, especially for gynecological massage.

Good Vibes. There was a vibrational revolution going on and finally doctors were getting exactly what they wanted: relief from a job they didn’t want to do. Like mechanics at a garage, they could reach up toward the ceiling of their office and pull down an electrical device suspended by a wire, select the appropriate attachment and finish their treatment in one-tenth the time. Or they could place their patient on a therapy table, face-down, plug in the vibrating portion of the device and come back 15 minutes later to a “beaming, healthy, radiant patient, no longer hysterical but energized and vital,” just as ads in the professional journals promised.

By 1910, the electric vibrator was being marketed as a home appliance in family periodicals. Modern Women, McClure’s, Needlecraft, and Modern Priscilla, all respected magazines for women published in the first two decades of last century, ran such ads. As the devices became simpler, price came down, technology advanced and homes became electrified, a funny thing happened. Fewer and fewer women were making that trip to the doctor’s office to treat the malady known for centuries as hysteria. Medicine had looked at women’s sexual satisfaction, men’s negligence or ignorance in contributing to it and labeled it a disease. And technology was placing the cure right in the hands of women everywhere.

Modern medicine and technology had found a cure for the disease that wasn’t a disease. And it was available to women everywhere.