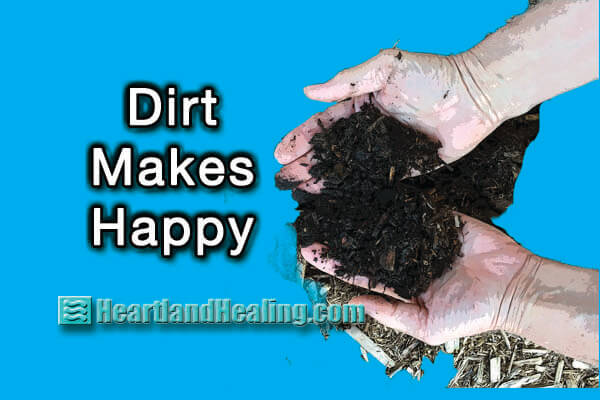 Apparently, humans like to kill. We squash bugs, sometimes just because we can. We hunt giant mammals and shoot them for sport. We stage organized, industrial killing to satisfy our addiction to meat. We murder species by our careless stewardship of the planet and insatiable drive to pave or alter everything that Earth put together so superbly. And, we kill other humans for a variety of reasons. Constantly, we try to eliminate every bacteria or virus possible in the mistaken belief that it will keep us safe and healthy. The unvarnished truth is that the more we kill, the less healthy we become. And that goes for killing bacteria and viruses.

One common bacteria in particular (and logic would indicate others exist) can improve our mood, increase our ability to learn and boost our immune system. And this bacteria is found in the back yard or in a verdant countryside.

Dirty secret. When summer comes on and winter fades into memory, we spend more time outdoors, often on our knees with hands in the dirt. And summer finds me with an opportunity to mention Mycobacterium vaccae in casual conversation. Myco, as I’ll call it, is one of the majority of bacteria on the planet that harbors us humans no ill will. In fact, Myco is not only benign but indeed, benevolent. As a non-pathogenic bacteria, it’s nothing to fear or try to kill off with sterilizing chemicals. If we resist the urge to purge life from our soil with RoundUp and the like, we’ll be rewarded with a dirty high.

In 2005, Dr. Mary O’Brien, an oncologist at Royal Marsden Hospital in London played a hunch. She was experimenting with the idea that certain bacteria may boost the immune system and wanted to see if it helped some of her lung cancer patients. What she found is amazing.

Using M. vaccae, she found that her patients’ immune systems responded well. But not only that, they seemed to be happier and depression, often associated with severe disease, began to ebb significantly. Other research followed and found that indeed,, our friendly bacterium is in the running for Man’s best friend.

M. vaccae is nearly everywhere outside. It lives a simple life in the dirt of your yard and garden. It colonizes the forest floor and fields and riverbanks all over the world. Unless you pour poison on the dirt and kill it. If your garden is relatively free of deadly chemicals and poisons that too many humans use, you’ll find M. vaccae in every spadeful of dirt you turn, in every handful of soil you clutch.

Something special happens when you let M. vaccae in that handful of dirt into your personal space: you get happy. Dr. O’Brien went through a detailed scientific process to get Myco into her patients. She fragmented the bacteria and injected it. Luckily, we don’t have to do that. All you need to do is dig in the dirt and you’ll breathe in some of the effects of Myco.

Happy hormone. Neuroscientist Christopher Lowry at the University of Bristol took Dr. O’Brien’s findings even further. He and colleagues found that Myco not only improved mood and boosted the immune system but found that certain allergies, like skin rashes, were alleviated by exposure to Myco. Being a brain doc, he found a reason he could understand.

“What we think happens is that the bacteria activate immune cells, which release chemicals called cytokines that then act on receptors on the sensory nerves to increase their activity,” he says.

Research found that serotonin-producing neurons in a specific region of the brain — the dorsal raphe nucleus — became more active. “That’s important,” Lowry says, “because cells in that part of the raphe project to parts of the brain that regulate mood, including the prefrontal cortex and the hippocampus, which is also involved in mood regulation and cognitive function.” They also found increases in serotonin itself in the prefrontal cortex.

Grounds for happiness. Myco generates our natural “feel good” hormone, serotonin. Lowry, lead author on the paper from Bristol University, said: “These studies help us understand how the body communicates with the brain and why a healthy immune system is important for maintaining mental health. They also leave us wondering if we shouldn’t all be spending more time playing in the dirt.”

In another study, researchers found that exposure to the bacteria enhanced learning ability.

“Mycobacterium vaccae is a natural soil bacterium which people likely ingest or breath in when they spend time in nature,” reported Dorothy Matthews of The Sage Colleges in Troy, New York, who conducted the research with her colleague Susan Jenks.

Experimenting with mice, they found learning improved significantly. It is known that serotonin lowers anxiety and lower anxiety results in better learning ability.

So Myco helps us learn. Who knows what else good Myco does for us?

Humans should spend more time harmonizing with Nature rather than trying to dominate or kill it. Or haven’t we learned that yet?