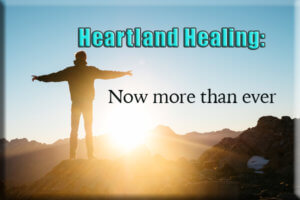 Heartland Healing: Now More Than Ever

If you are old enough to remember, and bright enough to have been paying attention, you may have noticed something disconcerting back during the Great Economic Contraction of 2008. While brick-and-board businesses and the housing market were floundering, while people were losing their life savings and going under water on their home loans, there were two obvious and readily apparent industrial complexes that were expanding like never before. They were gobbling up real estate, increasing their customer base and growing in power and value while the rest of the economy dwindled.

Think back and you may recall a time before UNMC owned almost all of the property along Saddle Creek Road from Cuming Street to Leavenworth and beyond. Coax your memory a bit and you may recall when UN-O was a sleepy little campus just getting into the dormitory business and not a megalithic dominance eating up the rustic racetrack of Ak-Sar-Ben and building extensive and secretive installations along Pacific Street and Center. Both of those institutionalized industries were thriving while financial ruin threatened everyone else.

Academia and the techno-pharmaceutical medical model have become more powerful than any other time in history. Public demand for their products is driven by media marketing and more insidiously by the policies of government. We should be wary, most especially of the meddling by legislation designed to give the medical industry more power.

In many ways, the public has only itself to blame. Buying into the barrage of omnipresent advertising and the media message that we’re all sick until proven healed by the drugs, devices and determination of the Western medical model, Americans especially have acquiesced and surrendered to the pseudo-science that passes for “health care” in our nation. And yes, it is pseudo-science when many medications are approved for sale without adequate scrutiny or testing and found to work in only a narrow percentage of applications. Or have you never noticed that even the Center for Disease Control acknowledges that most vaccines only work part of the time and even the drug ads offer that “blah-blah may help you with your [name the disease here]”. When I learned about the scientific method in school many years ago, it meant that a scientific experiment would result in the same outcome every time, not just once in a while.

Disease mongering is a thing. Ask yourself this question: Is the natural state of the human body one of sickness or of health? I happen to believe that the human body is supposed to be healthy, not sick. Yet it appears that we are constantly being told that there must be some disease we are suffering. Since we are the only country in the world (aside from the tiny island nation of New Zealand) that allows direct-to-consumer drug ads, only a dolt would be blind to the reality that we are being marketed to, that we are targeted customers. And healthy customers have no need for Big Pharma products or to be wheedled into constant visits to the doctor to see if we can find something wrong so they can fix it.

Now let’s get something clear right here and now. Modern medicine is miraculous when it comes to addressing massive traumatic events. That’s not up for debate. And doctors are not villains but are often themselves aware that they are trapped in a faulty system. The faceless, corporate, profit-motivated ideology that perpetuates the notion of sickness as a permanent state that requires more and more of our dollar is the real problem. And when aligned with politicians who line their pockets with techno-pharmaceutical donations then sponsor friendly legislation that is wrapped in the guise of being in the public interest, the medical industry is a pernicious disease that devours our health.

When 70 percent of Americans are strung out on one prescription drug or another, when over a million Americans have to go to emergency rooms for side effects each year, there is something significantly wrong.

Perspective. Each year, about 38 children die when left in unattended vehicles. So the auto industry is self-regulating and developing technology to alert drivers if they have left an animate being in the backseat. Yet each day 300 Americans die from adverse reactions to properly administered prescription drugs. 300. Each day. We are the most heavily drugged society in the history of humankind. And we are paying the price in human lives.

Here’s the wonderful part of it for those who wish to escape the spiral into drugs and techno-medicine: The majority of conditions for which Americans take prescription drugs can be addressed by lifestyle changes, holistic healing modalities and common sense behavior. Now, more than ever, realigning with the natural state of the body and relying on alternatives to drugs, surgery and technology seems to be a good idea.

Heartland Healing is a metaphysically based polemic describing alternatives to conventional methods of healing the body, mind and planet. It is provided as information and entertainment, certainly not medical advice. Important to remember and pass on to others: for a weekly dose of Heartland Healing, visit HeartlandHealing.com.
2019.09.10