Home » Heartland Healing » Homeopathy: What it is, is what it ain’t. 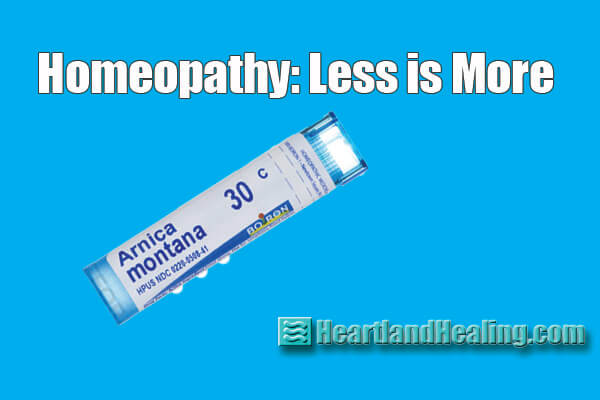 Homeopathy: What it is. What it ain’t.

At a mere 75 pounds, Gina is the smallest German Shepherd I’ve ever owned. But she’s the strongest. A willful, impulsive and urgent six-year old red-and-black, she darted from the camper one day in April to chase a squirrel. I wasn’t ready and her leash ripped the inside of my index finger nearly to the bone. So much skin disappeared, healing became a challenge for my body. I immediately washed the bare underlying tissue and applied nature’s best antibiotic: raw, unfiltered honey. The rip was in the crease of the second knuckle and after four weeks of protecting it, the wound still wasn’t healing. My massage therapist reminded me of the well-known homeopathic medicine, Arnica montana. Arnica is used for wounds and bruises. I had used it before with remarkable results. I picked some up at Whole Foods and within 24 hours, the result was obvious. Healthy tissue was advancing, debridement was occurring. It’s not all the way healed yet but the change is obvious. So you might say we’re revisiting a topic as a testimonial.

When less is more. Homeopathy is a system of treatment using medicines derived from natural sources (plants, minerals or animals) in amounts so dilute that they are virtually undetectable. Homeopathy’s trump card is the belief that the body has an innate ability to heal itself and needs only a trigger to activate its powerful healing system even if the trigger is tiny. That healing ability of the body is something that Western science can neither explain nor deny.

What is most odd about homeopathy may not be that it works or is gaining scientific support but that so many in the United States are drawn to using it. Homeopathic remedies are big sellers at health food stores and homeopathic practitioners are sought for their advice. All the while, the practice is the target of harsh criticism by some who find that the idea of infinitesimals flies in the face of Western science. Yet mainstream medicine has no problem using the same philosophy when injecting human guinea pigs with virus particles called “vaccines.” They say it causes the body to “immunize.”

A specific science Too often, Americans misuse the term homeopathy and apply it to anything that is a non-conventional therapy. But homeopathy is a very specific branch of natural medicine incorporating a practice known by famous physicians throughout history. The “Law of Similars” states that “like cures like.”

Hippocrates was the first to use the law of similars in Western culture. The word itself is of Greek derivative. He, and later others, reasoned and demonstrated that a substance producing a particular symptom in a healthy person would stimulate the body to remove that symptom in a sick person. Hippocrates used homeopathy extensively and 15th century physician Paracelsus documents homeopathic medicines.

In the 18th century, German physician Samuel Hahnemann disapproved of the bloodletting, leeching, blistering and purging that were the mainstream medical practices in 1759. Hahnemann worked with herbs and noticed that herbs taken in low dosages cured the same symptoms that those herbs produced when taken in high doses. He experimented on himself with quinine, the plant-based cure for malarial fever. When he took small doses of diluted quinine, he became ill with fever. When he stopped, the fever went away. For him, that proved the Law of Similars. Hahnemann developed his own ultra-diluted medicines. Homeopathy formally came into being.

The dilution solution. Hahnemann intuited something that is difficult, if not impossible to empirically prove. The idea is that if one is sick, a homeopath administers a specific medicine containing a diluted substance, if given in full strength to a healthy person, would cause the same symptoms as the disease. The body is stimulated to reverse the imbalance that caused the symptoms.

The idea of dilution is what really confounds the Western mind. To Western thinking, a medication, whether pharmaceutical or herbal, is more powerful or effective the more concentrated it is. Not so in homeopathy. A homeopathic medicine is made by introducing the so-called “active” ingredient, often an herb or mineral, into pure water at a ratio of 1 part per 99. That solution is shaken vigorously in a process known as succussion, then one part is added to 99 parts of pure water. The mixture is shaken again and the process repeated perhaps hundreds of time. Finally, the end result water is dropped onto an inert pill or tablet and the medicine is ready.

Critics contend that the final water solution is so dilute that it cannot contain even a single molecule of the original element. But that element has imparted a characteristic to the water molecules that persists. Modern research now shows that indeed, water molecules are changed when these natural elements are introduced and the water is agitated. The molecules “clump” together in a regular pattern. Research suggests that the newly “structured” water is the real trigger for the body to start healing itself.

Despite what Wikipedia maintains, there is peer reviewed research that supports the efficacy of homeopathics. Research or not, it’s hard for the Western mind to wrap itself around the notion of homeopathy. Judging by consumer acceptance of homeopathic medicine, it doesn’t matter. People want it because it works for them.

Since the Federal Food, Drug and Cosmetic Act of 1938, homeopathic medicines have been recognized as safe. There have been no reported ill effects and no deaths. After all, how could an ultra-diluted drop of water be dangerous?

One extensive Swiss study found proof that homeopathic remedies are effective. An English study found otherwise and considered them placebos. But somehow, millions of people have found that homeopathy works for them. Placebo or not, truth diluted is still truth. And the truth is, my finger is getting better with Arnica montana.