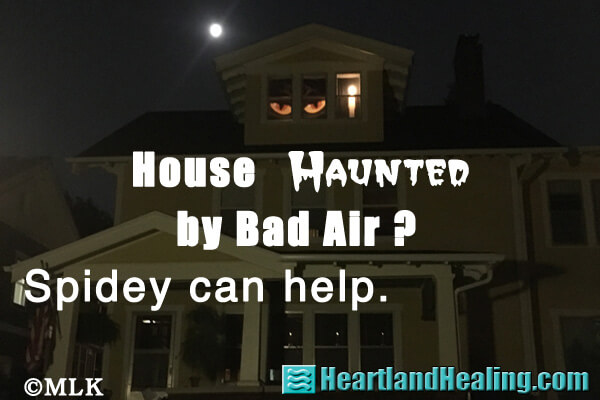 We’re lucky enough to live in an old house; 104 years to be precise. It’s not as old as the 16th century cottage I lived in for a while at 17 Lower Street in Chagford, England but it’s still old enough to avoid being hermetically sealed. Newer houses are so tightly sealed, relying on modern “air conditioning” for atmosphere, that they run the risk of developing “sick building syndrome.” Not so with ours. The double-hung windows and storms, while cozy, still allow an exchange of fresh air with drafts. As a bonus, the unpainted oak woodwork emits no pollution or chemicals. Think about it: The old-growth wood in our house is from trees that were alive when Lincoln was President. That was before DDT, formaldehyde, automobiles and RoundUp filled our atmosphere and environment with toxins that ended up locked in the wood.

Despair not. There is a way to clean up your inside air, whether you live in an old house or a new apartment. It’s as easy as keeping a few plants on hand. Most kids learn in school that green plants breathe opposite of how animals function. While we breathe in oxygen to live and exhale carbon dioxide, green plants do the reverse. But here’s the kicker. Along with the CO2 that plants absorb, they also purge the air around them of toxins like those found in our modern world. And believe it, a modern house with fire retardant, stain-resistant, non-biodegradable building materials and furnishings is filled with poison-emitting surfaces. Plants can rid the air of toxins so efficiently that NASA uses them to keep space stations clean. You can do the same with your home and now is the time to do it, as the weather is turning and windows are closing.

Philodendron A common houseplant that is easy to grow and cheap to buy, the philodendron, like all plants, will breathe in carbon dioxide and release clean, fresh oxygen. In addition, it’s expert at removing the harmful chemical formaldehyde from your indoor air. I have a philodendron that is now twenty years old and going strong. All I have to do is water it and thank it every now and then.

English Ivy Another easy grower, this one is a superplant when it comes to detoxifying your indoor air. NASA found that it removes formaldehyde, toluene, benzene and xylene. It will also decrease airborne mold spores by as much as 60 percent.

Peace lily This workhorse indoor plant is exceptional at removing trichloroethylene from the air. It also does well getting rid of formaldehyde and benzene, too. Another benefit is that a peace lily can remove mold spores from the air. Try placing one in your bathroom to cut down on any mold growth around the walls or tub.

Palms Almost any sort of palm will clear the air in your home. They are rated at the top as purifiers and help humidify the house, too. NASA tested the areca, the lady palm, bamboo palm and the rubber plant and found them to be tops in efficiency. They can literally take the place of an electric humidifier and recycle air while removing toxins.

Chrysanthemum Seems simple but what this plant can do in addition to beautifying your home is remove trichloroethylene. It also does well getting rid of formaldehyde and benzene.

Boston fern Always a popular indoor plant, a Boston fern can humidify and remove toxins as well. Boston ferns also control mold and bacterial growth. They can make it easier to breathe in your bedroom at night by keeping allergens at bay. They are great for kitchen areas and other rooms where moisture is high.

Snake Plant These are also known as “Mother-in-law’s Tongue,” but in this case, the toxins are taken in by the tongue rather than spewed by it. (Joking!) It’s one of the easiest to grow, lowest maintenance plants known. It’s almost impossible to kill one of these. But they are a workhorse when it comes to clearing the air. They take in huge amounts of pollutants like mold spores, formaldehyde, nitrogen oxide and more. They thrive in bathrooms where mold spores are so common. I have one that I regularly forget to water for weeks and it does great.

Get started A 2000-squarefoot home could use 10 plants and see a huge benefit. It takes only 24 hours for the plants to work their magic. There’s a platoon of plants ready for active duty.