Home » Heartland Healing » How Jesus Got His Copyright Back – Conclusion 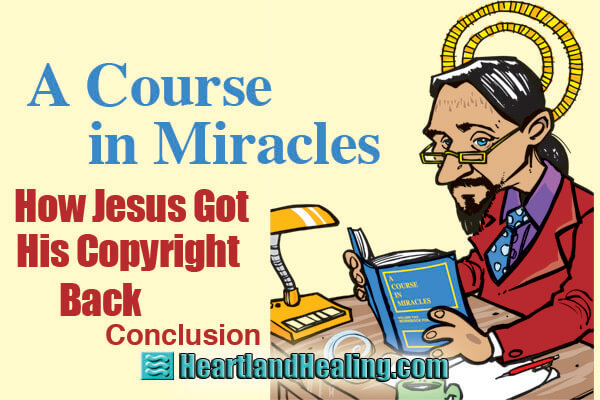 How Jesus Got His Copyright Back – Conclusion

Part 1 Summary: A Course in Miracles is published in book form as the work of Jesus channeled through Columbia University professor Helen Schucman

Part 2 Summary: A Foundation acquires the copyright and sues students for reprinting portions of ACIM

Part 3 Summary: An Omaha attorney joins the fight to make the Course in Miracles available to all. A lost cassette tape, some photocopies of an early text are crucial.

The Omaha beef. Omaha attorney Tom Whitmore received a copy of the early A Course in Miracles text that had been given to Hugh Lynn Cayce, the “HLC” text.

“I didn’t know what it was when I got it. I eventually opened it and saw how different it was from the popular 2nd edition [of A Course in Miracles] that is in bookstores that I had been studying for 10 years or so,” Whitmore said.

“In the first four chapters [the HLC text] contained 25% more material than the [bookstore] editions. Some of it was pretty significant to me. Some was subtle and some changes in emphasis and nuance and some of it was absolute change in meaning. I thought, ‘We need to get this out.’ So we created a non-profit corporation. There were a lot of collaborators in this process. We had people on four continents in the group, called Course in Miracles Society.

“By spring of 2000, we took the internet version of the HLC text and had it reproduced in print form, easier to deal with than an electronic file and we published it as the Jesus’ Course in Miracles. It was bound and contained the entire HLC 31 chapters plus an appendix that compared the HLC version to the published [bookstore] 2nd edition.”

Publishing that version exposed Whitmore and his group to legal interaction with Wapnick and FACIM who arguably “owned” the copyright. “We printed 1500 and within a couple weeks had mailed about 500 to people who wanted it and then were hit by an injunction and had to stop.

“Two things happened. When we published, we filed a lawsuit in Federal court in Omaha seeking a declaratory judgment that the copyright was invalid and unenforceable, which would permit us to continue our publication. Four days later, FACIM, Dr. Wapnick’s organization, filed a lawsuit against us in Louisville, Ky., where one of the directors resided, claiming an infringement on their copyright. So we had these Federal court cases pending. They prevailed on the judge in Louisville to issue an injunction prohibiting us from distributing pending this litigation. Eventually they got the Nebraska case transferred to Louisville.

“The outcome of our case has been dictated by the setting aside of the copyright. And because [the Endeavor] case was further along than ours, we kind of put the brakes on our case and focused our energy on assisting with their case, providing them with the witnesses we had and the information that we had.”

Judged Wapnick. After FACIM gained control of the Course copyright, it seemed to become like any other book. Course students don’t think of ACIM like that.

“It’s the commercialization of it. [FACIM] treat it like a bag of Fritos™ and then they try to put a copyright on the material and then put a trademark on the name, of all things,” continued Whitmore. “They are trying to trademark the title of the book. That’s the last part of the Endeavor Academy suit that still has to be decided, the validity of that trademark. I think that will be thrown out, too.

“It’s the proper name of a book and case law says you cannot copyright a proper name like that unless it has gained secondary meaning for the works of the author. Nobody associates A Course in Miracles with FACIM, the seekers of the trademark. Ask the man on street who Ken Wapnick is and they won’t know. And if you ask them to name a person they associate with A Course in Miracles they’ll probably say Oprah or Marianne Williamson rather than the foundations or individuals involved in them. So I think they have a pretty impossible task of trying to show secondary meaning.”

Students of the Course believe its content should be free to reprint. Whitmore explained the importance of this landmark copyright decision.

“People like to quote the Bible and they like to quote extensively from it,” Whitmore pointed out. “The Course is a spiritual text and it’s the primary spiritual text for a growing component of our society. I foresee the day when it will be of the same stature in the world as the Bible or any religious text of that sort. You ought to be able to quote it, translate it into as many languages as wanted and people ought to be able to use it and benefit from it.”

And the Omaha version of the Course? “They’re here in Omaha, under lock and key. When the court dismisses the case we’ll release them,” Whitmore asserted. “We’ve got people wanting them.”

“All things work together for good.” – ACIM Text, Chapter 4. If Wapnick’s lawsuits and restrictions on the use of the words in A Course in Miracles had not happened now, the status quo (i.e., somewhat limited and allowed use of ACIM content, done with a wink and a nod but no officially granted freedom) may have continued for years. Who knows? Years down the road, if restrictions and lawsuits materialized then, perhaps no copies of previously published versions of the text or dusty audiocassettes may have existed. Defendants in any lawsuit then may have claimed prior publication, but without evidence, it would have been hard to prove. Now it’s done. Jesus got his copyright back.

[Note: This four-part Heartland Healing was originally published in Heartland Healing Magazine. Outcomes of the legal wrangling may have been decided or may differ from these findings based on an old interview.]