Home » Heartland Healing » How Jesus Got His Copyright Back – Part Two 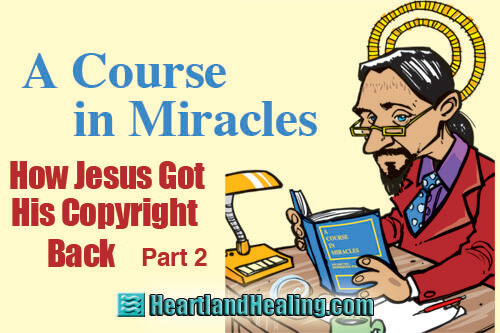 [This is Part Two. Part One described how A Course in Miracles came to be.]

The stated motivation for studying the Course is peace. To find peace, forgiveness, a change in our perception of the material world, is necessary. It was ironic then, that in 1999 the new owners of the A Course in Miracles (ACIM) copyright, the Foundation for A Course in Miracles (FACIM), Ken Wapnick and his wife Gloria, became embroiled in a contentious lawsuit with a community in Wisconsin known as the Endeavor Academy that included longtime students of ACIM. Here were two proponents of a course that teaches peace, believed to be channeled from the Prince of Peace Himself, and they were acting anything but peaceful. FACIM said the copyright was being violated by many students of the Course and specifically sued Endeavor Academy.

The suit backfired. In April of 2004, a Federal judge completely set aside the original copyright that had been granted to Foundation for Inner Peace back in 1975. A Course in Miracles officially entered the public domain. Omaha attorney Tom Whitmore was a major energy leading to that historic ruling. He and the group he formed to further free use of ACIM have also been involved in litigation with the Wapnicks and FACIM.

Shift Happens. Whitmore began studying the Course in 1992. “It was the bookstore angels that did it. I was in Pegasus Bookstore one day, browsing,” said Whitmore. “I was in the spirituality section and the thing basically fell off the shelf and landed on my foot. I don’t recall if that’s literally true but I’ve told the story so many times now that it seems like it is. I didn’t know anything about the Course nor had I ever even heard of it.

“The book was wrapped in plastic like a Penthouse or something and I bought it. I brought it home and I opened it to the introduction and I read that first paragraph1 and it just seized me.”

A Creighton graduate and a practicing attorney in Omaha since the mid-70s, Whitmore recognized the importance of access to the material contained in ACIM. Groups had used parts of it in teaching for years.

“When the Course first came out, [the original publishers] were allowing people to publish excerpts from it and to use phrases and so on,” Whitmore added.

Things changed when the copyright shifted from the Skutch’s Foundation for Inner Peace. It’s a murky story why that happened in the first place.

“The story put out to the world was that Judy and Robert Skutch were getting on in years and it was time to pass the torch to the next generation. At least, that was the way they spun it,” Whitmore recounted. “But I believe there was some infighting going on. Gloria and Ken Wapnick were agitating for tighter control of the Course and tighter enforcement of copyright. I’ve heard from insiders that Skutch basically just threw her hands up and said, ‘You guys do it. I’m not going to have any part of this.’ That is what I understand.

“And that resulted in commercialization of the Course. As soon as Wapnicks got control of the copyright, they entered this multimillion-dollar contract with Penguin Books for publishing and Penguin began a campaign to proselytize the Course in the world.

“Gradually [FACIM and Wapnicks] began to tighten the process until even what we consider fundamental fair use was restricted,” Whitmore said.

Contention escalated into the inevitable lawsuit. A fateful demonstration of pride started the ball rolling.

Oops! “It’s a series of lawsuits, really,” explained Whitmore. “One was brought [against] the New Christian Church of Full Endeavor in Wisconsin Dells, Wis., also known as the Endeavor Academy.

“Endeavor is a Course-based community. They have residential facilities and what I would call graduates of that residential program who are out in the community and have jobs but are still centered around the Academy.2

“They had done a printing that contained extensive ACIM quotations and teachings around that material. They weren’t selling it or anything. They were giving it away to their students.

“One day, they proudly sent a copy off to Wapnick at FACIM. It was ironic in a way, because they really just wanted to show him the kind of work they were doing. That was apparently the wrong thing to do because when Wapnick received it, he turned around and sued them for copyright infringement. That is the beginning of the litigations.”

Footnotes: 1) “This is a course in miracles. It is a required course. Only the time you take it is voluntary. Free will does not mean that you can establish the curriculum. It means only that you can elect what you want to take at a given time. The course does not aim at teaching the meaning of love, for that is beyond what can be taught. It does aim, however, at removing the blocks to the awareness of love’s presence, which is your natural inheritance. The opposite of love is fear, but what is all-encompassing can have no opposite.

This course can therefore be summed up very simply in this way:

Nothing real can be threatened.

Herein lies the peace of God.”

2) Endeavor Academy has since undergone some restructuring after its founder and leader died. Some critics have said the Academy drifted from the basic tenets of the Course.