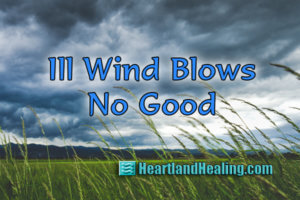 Once upon a time, there was only one kind of music: music. As instrumentation evolved and emerged, musical styles became fractionalized, even classical music. The larger scheme transitioned into two main categories of classical and pop. By the 21st Century we have oodles of different styles of each.

Back in the 1950s, a crossover hit from Broadway spanned country, pop and show tune categories and popularized the notion of naming wind. Yes, that’s right. Musical audiences learned that winds have names. That song was the classic, They Call the Wind Maria.

When I read John Fowles’ The Magus, I learned about a wind named meltemi, that “tough summer gale from the Ionian islands.” How, I wondered, did a person learn about a wind named thus in the classical land of Greece? I started paying attention.

An ill wind blows no good. Winds are unseen. Only their effects will disclose their damage. Across the planet winds have names. Winds have consequences. Observe closely.

In the Midwest, autumn is the season of wind. It is not all bad on the surface. There is a certain amount of desiccation that is required for harvesting grain and hay. “Make hay while the sun shines,” is no idle epigram. Moisture can turn harvested crops into vodka or ergot, neither of which is a good thing.

But winds can drive a human crazy, especially winds that persist. Check the list from around the globe.

The foehn. Föehn, föhn, however you spell it, it’s likely the most studied of all the capricious winds. A seasonal gust that seems to last for an eternity sweeps down from the Alps into central Europe. When it continues on and on for weeks, sociologists have seen increased suicide, depression, insomnia and related illness. The föehn is caused by high-altitude compression similar to what causes California’s Santa Ana winds, only with the föehn, compression happens over the Alps instead of over the Sierras. By accounts, the main difference is that the föehn can last for several weeks on end. That contributes to broader studies of its effects. With the similarities found around the world, winds like the föehn are also linked to migraine, anxiety and upset.

The mistral. This wind breezes down the Rhone valley in Europe. Famous as a word, its overall health effects are less pervasive than the foehn. That is likely because it is not as dry or persistent. It is variable and localized, lasting for shorter periods of time. Studies have correlated anxiety and insomnia however.

Santa Ana Americans are most familiar with the Santa Anas of Southern California as the media never hesitates to mention them when covering stories of the wildfires in that state. I have firsthand experience with the effects of the Santa Anas having battled the Kirkwood Bowl fire right up to my driveway when I lived in Laurel Canyon. And I was one of the lucky ones. Showing up in the autumn and lasting on and off for weeks, the dry winds out of the Sierras have similar effects to those of the foehn but more acute. Poor forestland management and overdevelopment in California make the danger of fire more obvious than in Europe.

Sirocco Another famous name in winds is the Moroccan wind of North Africa. Sweeping north from the Sahara, it is a wind of many natures that can start off dry and gather moisture as it nears the Mediterranean. It is often associated with nautical troubles but the greatest threat is when its arid dust reaches Spain, Italy and the Canary Islands where it is known as la calima. Across North Africa and southern Europe, increased respiratory problems, gritty surfaces and equipment plague those in its path. Across the region, the same wind has varied names. In Egypt it is kahmsin, in Libya the gibli, Malta the Xlokk. A similar version of the sirocco in the Middle East is the samoon that ravages the Saudi peninsula, reshaping dunes and landscapes.

They travel by many aliases. In the Mediterranean Sharkiye, Xlokk in Malta, in Africa the Simoon and Harmatan, the Boras of the Adriatic, Karaburan of the Gobi, the Zondi of Argentina, the Tramontana of Spain. So if you had a restless sleep recently, blame the ill wind.

Winds of the world travel by many names. They affect human wellbeing. Some go unnoticed by their victims but ill changes occur regardless. A cold wind can turn the edges of the body blue with frostbite.

When the drumbeat is the music and the time is erratic and it makes you blue, choose another station. Sing a familiar song.