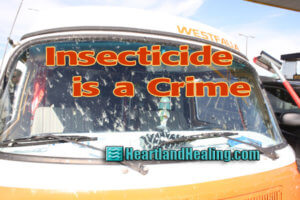 Insecticide is a Crime

Over the past half-century or so, I have driven the highways across our country countless times. I’ve visited all but four of the lower Forty-Eight. Last summer saw the strangest of those travels from the Heartland to the West Coast. In August and September, I drove over five thousand miles. Not once did I have to clean the windshield because it was cluttered by squashed insects. I’m not exaggerating. Any highway driver knows that is just plain odd.

Crime seen. With any deliberate killing of a human — a homicide — we are troubled and seek answers. If someone doesn’t show up at work, or home or anywhere they might be expected, we investigate. With any murder mystery, there are components to look at. What was the weapon? What was the motive? Who are suspect?

When thousands of bugs went missing from my windshield, I became concerned. I am still. I have concluded that it’s because they have been killed before they could meet their end as a splat on my car. Now is the “how.”

Since the middle of last century, it is estimated that mankind has invented or begun use of over 80,000 different chemicals. Many are intended to kill insects. Many of them do it as a side effect. And they kill other living things, too. For the sake of human convenience, greed or even good intentions, we have either intentionally or inadvertently waged a war against Nature and our fellow inhabitants of Spaceship Earth.

The Weapon: Chemical warfare. So, we have a weapon that has killed the most obvious of the five classes in Phylum Arthropoda, the insects. Sure, we swat them and step on them and tear their wings off and as little boys, roasted ants with magnifying glasses. But the mass kill-off is the result of our chemicals. It’s the smoking gun.

The Suspect: Dominion or domination. I know many humans who follow the Bible have misunderstood. The Book of Genesis says that God gave humans “…dominion over all animals.” Too many of us took that to mean domination. There is a difference. Though both words rise from the Latin dominus or “lord”, there are good lords and bad lords. Dominion is to govern, lead. Domination is tyranny, blatant disregard for the rights of another. Humans have taken to dominating nature and its species rather than benevolently governing and leading them. And it’s to our downfall. The perpetrator is we humans. We have a rap sheet that stretches back to Cain and Abel. We kill things, often with little or no remorse and too often, even braggadocio.

The Motive: Human hubris. Self-importance is the highest form of idolatry. Not only do humans place ourselves above all other species but we actually think we know the best way for those species to live… or die. With our technology and analytical thinking, we have come to believe that we are the gods of this planet and can bend and shape it to our will. Part of the thinking may be based on good intention, some on malice. In any and all cases it is wrong. Humans do not know best. Still our hubris drives us and that is our motivation to continue blindly. We are killing insects but amazingly factions are already planning to build robotic “bees” to pollinate our crops. If that is not false pride, such does not exist.

“Round up the usual suspects.” Who can forget that line from the movie Casablanca? Well, we have a suspect. Humans are responsible for this wanton destruction of our planet. It’s all of us. None is without culpability. You might think it’s just the fossil fuel corporate titans. You might think it’s Wall Street capitalists. You might think it’s humans carrying out unchecked pillage of natural resources for profit. But in truth, it’s you and it’s I. If you bought something from Amazon; if you rode in a car to your protest; if you used ink to make your protest signs; if you texted on your smartphone; if you wiped your butt with toilet tissue or are eating an Impossible Burger — make no mistake, you are one of the culprits. We are guilty as a species.

“Without data, you’re just another person with an opinion.” — W. Edwards Deming

The Great Cascade. And of course, human scientists have gone about their wayward task of quantizing what is evident. Researchers in England have been measuring the number of insects squashed by motor cars since at least 2004. So I guess it is not just my opinion that insect populations are in alarming decline. (1)

And now, over the past three weeks, I am noticing almost zero birds at our feeders and birdbath when there are usually too many to count. That is also troubling. May be a blip. But when insects are in decline, others will follow.

Greta Thunberg may be crazier than six pounds of bat shit. But she serves a purpose as do so many others, self included: alarmist. Alarmist is not a bad thing. It’s someone sounding an alarm. I suspect what we are seeing is the beginning of what I’m calling The Great Cascade, a sequence of events that will leave the nature of this planet vastly changed. More species will meet extinction. Whether homo sapiens is one of those is unknown. But rather than see this as gloom and doom, just look at it as it is what it is. It’s the course of Nature. Maybe humans will get out of this alive, maybe not. But this insect thing is radical, drastic, noticeable. The die is certainly cast.

We cannot think our way out of this. In order to survive, to ride this out, one need be in tune with nature, not above it. Maximum adaptability is the key. The less one need depend on society for the basics of life — food, water and shelter — the more likely is survival. Can you find water? Can you forage? It may sound radical to you today but driving 1800 miles without a bug hitting my windshield is radical to me.

Heartland Healing is a metaphysically based polemic describing alternatives to conventional methods of healing the body, mind and planet. It is provided as information and entertainment, certainly not medical advice. Important to remember and pass on to others: for a weekly dose of Heartland Healing, visit HeartlandHealing.com.
2020.02.18