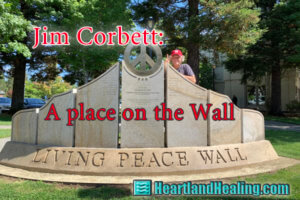 Jim Corbett: A Place on the Peace Wall

I was always jealous of Jim Corbett’s guitar-playing talent as he effortlessly fingered the fretboard of his beautiful Martin acoustic in the basement of my Spencer Street home. I coveted that guitar. I wanted one almost as badly as I craved a 1968 E-Type Jaguar.

I was always frustrated by my friend’s constant ability to best me at chess, even on those long nights chomping on homemade, toasted Butternut bread, triple-decker, salami, onion and peanut butter sandwiches.

I was always impressed by Jim’s athletic ability covering ground balls at second base for the St. Cecilia’s Grade School baseball team. (Though he could never hit a curve and I spent all my time hitting on curves.)

And I admit I thought Jim was crazy driving hundreds of miles in a van in August of 1969 to some music show in a guy’s pasture in Upstate New York.

But somehow I cannot measure the pride, the love and admiration I’ve grown to feel today for my pal who grew up only a few houses away in the shadow of the Cathedral in Omaha. On Saturday, September 7, 2019, my friend’s name will be etched in stone on the Living Peace Wall in downtown Sebastopol, Calif., his adopted home of five decades.

Jim Corbett’s name will share a place on the monument that honors “…Those Who Have Worked Nonviolently For Peace And Justice.” Among the names sharing space with Jim’s are Daniel Ellsberg, Nelson Mandela and Jimmy Carter.

How did Jimmer, the moniker his mom gave him early on, end up in such heady company? The answer is simple and strikes to the core of Peace. He has spent his lifetime doing what he loves and the biggest part of that is music.

Landing on his feet in Sebastopol in the ‘70s, Jim married Jan and began to raise a family. Volunteering to teach music at a daughter’s middle school led to a miraculous opportunity. Within a couple years, “Mr. Music” was visiting the schools in the county as the peripatetic player and teacher of tunes. He carried music in his heart and that carried him to higher ambitions. 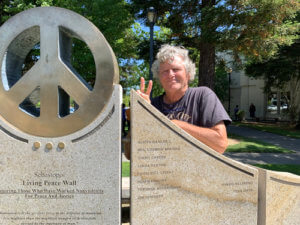 Woodstock: Three Days of Peace & Music Apparently, Corbett never left Woodstock. Peace and music became intertwined the longer he lived in Sebastopol. Three days just went on and on. And about a quarter century ago, Corbett established the non-profit Mr. Music Foundation. (www.MrMusicFoundation.org) The foundation provides music teachers, instruments, lessons in formal and informal settings. And the idea just grew. The music never stopped. From there came the Love Choir. The only requirement for membership was a desire to sing. Lifting hearts through love and music became the essence of everything Mr. Music does.

Whenever I visit Sebastopol and walk the streets with my friend Jimmer, go to lunch, shop Main Street or Whole Foods, the shout outs to “Mr. Music” come incessantly. On one restaurant visit, three generations came to the table to say, “Hi.” All had been students of Mr. Music. Then in 2009, Corbett approached the Sebastopol City Council requesting a resolution that would name Sebastopol “Peacetown USA.” It was approved. Over the next decade, the weekly summer concert series was developed. A free concert in the local Ives Park, dubbed the Peacetown Concert Series draws thousands. During the evening’s event, a moment of silence is spent meditating on peace, bringing it from within each mind to the world without.

Now the Peacetown Foundation is in the works. Jimmer has told me that peace begins within and his dream is to see other Peacetowns join the world of peace he sees for the future. That is the expansive goal of the new foundation. Peace is a thought that grows from individual to individual, shared as minds and hearts join. Already the pocket of peace that is Sebastopol is expanding.

None of this happened by accident. Or did it? Jim is really the best surfer I know. I don’t mean real surfer as in hodaddy’s and oceans and boards. But Jimmer succeeds in surfing the wave of the universe. Whatever way that wave breaks, he lets it take him. There is an energy that is available to all of us and it has only the name we give it. Call it “Love”. Call it “Peace”. Call it “God”. That energy has a characteristic that is impossible to ignore: It includes. It does not exclude.

Science sort of got it right when it came up with the Big Bang, an expanding universe as the unified field of energy. Call it what you will, it is inexorable. As we are all one and the same, when Jim Corbett’s name goes up on that Living Peace Wall, it is your name, it is my name. If we want it to be. Join in peace.

Heartland Healing is a metaphysically based polemic describing alternatives to conventional methods of healing the body, mind and planet. It is provided as information and entertainment, certainly not medical advice. Important to remember and pass on to others: for a weekly dose of Heartland Healing, visit HeartlandHealing.com.
2019.09.03