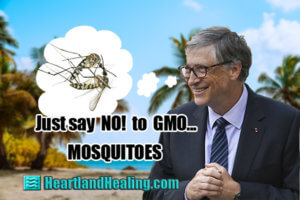 When will humans stop trying to play God? We were warned biblically, for cryin’ out loud. “Do whatever you like in the Garden,” the Big Man said. “Just one thing: do NOT eat from that Tree marked, ‘I know more than God,’ aka the Tree of Knowledge.”

Some find the notion of “God” too nebulous in this day and age of worshipping “science.” So for them, let’s call the notion “Nature.” This century’s poster boy for “I know better than God, er, Nature,” happens to be a guy named Bill Gates. For decades Gates has been going around the world trying to control nature rather than work in harmony with it. He’s able to do all this because he is obscenely rich. It’s important to note that “rich” does not equal “smart” by any means. In fact, this guy Gates shows little indication that he is in any way above average intelligence. But he is certainly above average rich. And willful. Now, bear in mind, there is no intention here to paint Bill Gates as evil. He may or may not be. That is not for consideration herein. But as noted, he’s an icon, a poster boy for a school of thought.

So it happens that Gates’ foundation, his personal expression of righteousness, is the financial provenance of what many folks see as crimes against nature. The most recent is his millions of dollars making sure that a lab-contrived species of insect becomes his latest play toy and insult to the natural order. He is the money behind a genetically modified mosquito that has already been unleashed on the world and, if plans persist, will find a home in the Florida Keys.

Unintended Consequences. The history of human blunders is filled with missteps that bounced off Nature and hit us square in the nuts. A brief list would include the invasive species that we either intentionally or ignorantly unleashed. Consider the European rabbit installed in Australia almost two hundred years ago in order to provide Sunday dinner for new settlers. It wasn’t long before the island continent was overrun from Alice Springs to Ayer’s Rock. Not good. How about nutria and the Mississippi Delta states? Kudzu vines intentionally introduced to the United States are devouring the South. Wonder where all the wildlife went in Florida? Non-native Burmese pythons in the Everglades have eaten all the small to medium mammals. Asian walking catfish? Feral cats and swine, European starlings are examples of ill-considered intentions gone bad. And a little thing called the Cane Toad? It can eat your poodle and kill you with its poison. Humans intentionally introduced all of these but none compares with the monster Gates’ money is manifesting.

GMO a “no go.” Many folks still believe a genetically modified organism is no different from what nature and man have been doing for centuries with hybridizing and cross breeding. It is not the same. Microscopically inserting the genetic material of one unrelated species into another is completely unnatural. It combines genetic materials from species as different as corn plants and bacteria, mice and tomatoes. Nature doesn’t let mice breed with tomatoes, in case you’re wondering. But scientists in a lab can pluck the genes from a mouse and insert them into a tomato. Sound a bit odd to you?

I don’t know anyone who likes getting bit by a mosquito. And I don’t know too many people who enjoy a bee sting, either. But we all can pretty much agree that bees are essential to our human existence, if only as pollinators.

Kids, the same holds true of mosquitoes. Though we don’t like mosquitoes — bats, birds, turtles, dragonflies, fish and frogs do. They dine on them. Mosquitoes and their larvae are dinner for that food chain. Add the fact that male mosquitoes do not bite us but dine on flower nectar, male mosquitoes are a pollinator vector. We need that part of nature.

But Gates and his laboratory company based in England, Oxitec, are doing their best to eliminate an important species. Why? Because Gates thinks he knows better than Nature.

The non-pandemic. No one is going to confuse Zika virus or Dengue fever with a pandemic. Why? Because no one dies from Zika. Few ever die from Dengue fever in the U.S. Yet Gates and Co. are seeking to eradicate a species of mosquito in the United States that is a disease vector for those illnesses even though nature placed that species in the Florida Keys. The male FrankenSkeeters will be modified so that when they sex a female skeeter, the result is non-viable larvae. Gates’ guys have invented a way for an entire species to screw itself to death.

Admittedly, death is a tragedy; a tragedy that happens as a result of life. And a death from Zika, though unheard of, or from Dengue fever is tragic. But those are so rare you can barely find them. Yet Gates is going ahead with a scheme to dump 750 million FrankenSkeeters in Florida with more planned for other states.

What will happen to the ecological balance once that is done? No one knows for sure but you can pretty much presume some species will go hungry at the very least. Monster mosquitoes could ensue at the very worst.

What will happen to the health statistics? Absolutely nothing. Zero, zip, nada. No fewer people will die from Zika or from Dengue.

We get maximum risk and zero gain. Because a guy has too much money and thinks he knows better.

Gates and Co. are playing God because they can, not because they should. He and his ilk are doing way too much of that. Nature doesn’t play that game. Consider who you listen to, who you follow, who you support. For your health and that of our planet.

Heartland Healing is a metaphysically based polemic describing alternatives to conventional methods of healing the body, mind and planet. It is provided as information and entertainment, certainly not medical advice. Important to remember and pass on to others: for a weekly dose of Heartland Healing, visit HeartlandHealing.com.
2020.08.25