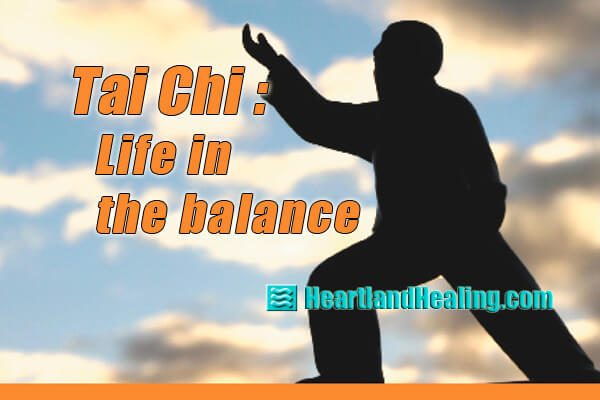 Life in the Balance: Tai Chi

I heard an ad on the radio the other morning. It was for a clinic in the area that specializes in a particular field of physical therapy that was addressed to persons who, for some reason or another, have difficulties with balance. We’re talking plain, old physical ability to remain upright when under the considerable influence of gravity.

As our nation’s demographic ages, more mature — and even some not so mature — are finding that muscle tone, balance and such are increasingly difficult. While aging and its unique physical changes play a role, inactivity and sedentary lifestyle erode natural abilities more than we often realize. Enter a specialized field of healthcare to focus on the simple act of remaining vertical when required.

Tai me up(right). Indeed, not to minimize some valiant practitioner’s efforts in applying Western technology to an age-old problem, but ancient Chinese practices have been doing a good job of physical therapy for, oh, millennia. When it comes to balance, retraining the mind and body to maintain it, the ancient practice of tai chi is superb.

When you visit one of the free classes presented by the Omaha Tai Chi Association, you have to realize you’re in for something out of the ordinary when you hear some of these descriptors: White Crane Spreads Wings, Wave Hands Like Clouds, Snake Creeps Down, Golden Pheasant Stands on Right Leg. Those are some of the evocative and picturesque names of poses that one learns in studying the ancient martial art of tai chi.

Just like you see in the television commercials or in news clips, the practice of tai chi is depicted as a cadre of practitioners standing silently while waving their arms and gently twisting their torsos with legs slightly crouched, as if swimming through the air in slow motion. It is perhaps a challenge to the Western mind to consider such a slow and deliberate movement could be of any health benefit. But then again, what the Western world doesn’t realize about healing and health could fill a universe.

In fact, tai chi is a respected, though overlooked, core of Traditional Chinese Medicine. It can inherently improve health, athletic performance and overall wellbeing. This fact isn’t lost on those who have a vested interest in performing to their highest capabilities or achieving and maintaining optimal health.

Slow down to go fast. Race car drivers and many athletes realize the paradox of decreased performance by going too fast. Slowing down to meet the optimal employment of energy leads to best results. Tai chi operates in accord with that principle. Tai chi is practiced as a series of connected postures that transition from one to the other. The postures have historically been described as movements found in nature. Movement is usually deliberate and at a very relaxed pace. Attention and mental awareness are paramount. It is the mental attention that makes tai chi a marriage of meditation and movement.

Part of its beauty is that tai chi can be practiced by anyone at any level of physical capability. Though it truly is a martial art, one would never mistake tai chi for one of the “fast” forms like karate, kung fu or tae kwon do. Instead, the process of tai chi is to perform slow, deliberate movement with relaxed skeletal muscles. With that, tai chi has remarkable health benefits. In fact, in China, a medical practitioner often includes tai chi in many situations.

“Tai chi has been proven in repeated studies to be a highly effective means for cardiovascular fitness, avoiding osteoporosis, and for coping with and often reversing chronic and degenerative diseases, including auto-immune diseases,” Mr. Ballai said.

“I have observed a number of remarkable successes by my students in these areas over time.  Tai chi allows us to simultaneously exercise and to bring the body back to its natural balance, or homeostasis.”

One of the most notable benefits of a committed practice of tai chi is a natural return to muscle tone and balance.

OTCA turns Twenty. Ballai founded the Omaha Tai Chi Association exactly twenty years ago this month. The OTCA continues with free classes though Mr. Ballai has relocated from the Omaha area. OTCA teaches tai chi in the traditional way. As is characteristic of the martial arts, tai chi is taught through the oral tradition, from master to student. To experience the maximum benefits, a student must maintain diligence, patience and seek and find the proper instruction. As is rapidly becoming the case, the trendy flourishing of cross-cultural phenomena like yoga, Asian medicine and the like has resulted in a dilution of teacher talent. It is important to find a teacher with experience. OTCA offers classes twice a week and there is never a charge for instruction.

Free chi for you and me. A typical class opens with a guided meditation, then a brief discussion followed by teaching and learning the form. Classes are open to all and beginners come all the time. Whatever level of instruction a student requires, a group forms to accommodate. The class meets in Papillion at the City Municipal Building and OTCA classes are offered free to the public. Find out details and more information at the HeartlandHealing.com calendar of events.