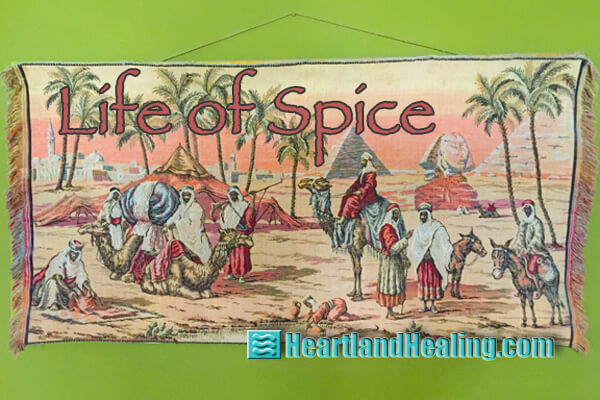 Not much of a Dune fan but I know enough about Frank Herbert’s epic fantasy series to recognize what he called “spice.” It was a fictional transcendent drug that was essentially the decay left from a giant species of space worms. It conferred long life and biological stability as well as various levels of ecstasy. To read the internet these days, our real-life spices are touted to do much the same.

Though immortality and intergalactic travel are unlikely to be found in your kitchen’s spice rack, there are some amazing qualities to spices that have made them one of the world’s most coveted commodities. History tells of spice trains crossing Middle Eastern deserts from exotic locales bringing the magic of spice to the West. Spices remain just as treasured as they were when carried by camelback; perhaps more so.

Turmeric. It’s the spice that gives Indian and southern Asian food that characteristic amber tint. More fragrant than tasteful, it’s an essential for curries. Medicinally, various components of turmeric have been found to be powerful anti-cancer agents, pain relievers and more. One study found turmeric’s prevalent agent, curcumin, equivalent to ibuprofen for pain relief of arthritis. National Institutes of Health has registered over 71 clinical trials completed or underway to study use of dietary curcumin for a variety of clinical disorders.

Cinnamon. Who doesn’t love cinnamon? We see it spicing up apple cider, sprinkled with sugar on buttery toast or dashed on a cup of cocoa. Cinnamon is harvested as the bark of a tree initially cultivated in Ceylon and falls in the category herbalists call a “warming aromatic.” Cinnamon warms the body and improves circulation. It also stimulates digestion. Cultures throughout the ages have used cinnamon to fight a cold. It is a mild expectorant and cinnamon oil has been used topically to treat bee and insect stings. Consider cinnamon the next time you have a cold. Instead of drugs with side effects that won’t cure a cold anyway, use a cup of hot water with cinnamon, a little fresh grated ginger root and some lemon. Sinuses clear and colds disappear, naturally. And I’ll never forget the beautiful, exotic wench from the Cat & Fiddle named Cinnamon who met many of the same qualities of the spice.

Cayenne. Known as capsicum or plain red pepper, it’s a powerhouse of healing properties. Cayenne defines spicy and hot. Medically, it’s as much a wonder drug as aspirin was once considered. Cayenne is useful in alleviating debilitating arthritis pain. Capsaicin, an active ingredient, is a main component in expensive over-the-counter and prescription pain medications. You can use the pepper itself; powdered in capsules, or as ointments. Cayenne stimulates the immune system and relieves congestion from colds. Next time you try chicken soup, make it spicy! Dr. James Duke writes that cayenne treats arthritis, backache, bunions, heart disease, ulcers, carpal tunnel, emphysema, fever, herpes, indigestion, pain, psoriasis, shingles and more. Cayenne promotes circulation and endorphin production. In 1990, actor James Earl Jones told me about a supplement using cayenne that he used to quit his two-pack-a-day Newport habit. Worked for me and my Camels, too.

Cloves are the dried flower bud of the clove plant. Pungent, sharp and powerfully aromatic, cloves enhance meals in fruit dishes, desserts and candied meats like hams. Anyone with a toothache while away from the dentist knows clove oil is a powerful pain reliever. It’s a proven antiseptic, too. Some people find lightly chewing on a whole clove a wonderful breath-freshener. Make a pomander with clove and an orange and you’ll have a natural, chemical-free air freshener that kills bacteria, too.

Saffron. True saffron is one of the priciest of spices, going for up to $5000 a pound. It takes 75,000 flowers to produce one pound of the spice. In use as a medicine for over 4000 years, saffron is believed to be anti-cancer, an immune system booster, good for eyesight and an aphrodisiac.

Chocolate. More accurately, cacao, is from the seed of the plant. When it’s roasted, shelled and ground, you have pure, raw cocoa. As such, it’s a powerful antioxidant with proven healthful qualities. Once Hershey or Mars get hold of it, adding fat, refined sugar or corn syrup, forget it. But in a more or less dark chocolate form, it reportedly lowers blood pressure, stimulates serotonin, lowers cholesterol, protects the heart and boosts cognitive function (thinking).

Many spices can boost your health and should be a part of your “kitchen medicine cabinet.” Some applications (such as oils) can be very powerful. Getting advice from an appropriate healthcare professional is a good idea and going with the purest, organic forms of spice is best. Spices are often grown with the use of pesticides so avoiding those is preferable.

When shopping for spices, check the stores that have bulk supplies. Whole Foods, No Name Nutrition and Next Millennium carry bulk. Savings are substantial. Some of the ethnic markets like Namaste (114th & Dodge), Asian Market (north 76 Street), Jacobo’s (24th & “L”,) and Tulsi Indian Grocery (130 & Arbor,) have unique selections of packaged spices.

All of the above stores offer product at prices far below the individually packaged small bottles of spices at the standard grocer. That way you can try the spice of life without hitching up your camel.