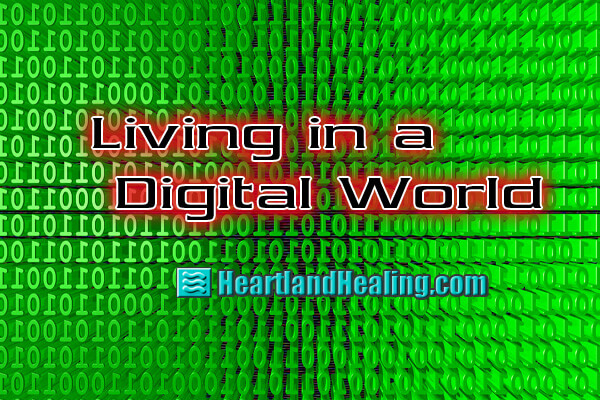 Living in a Digital World

I heard the song “Black or White” the other day. Reminded me that Michael Jackson was one of the most unique people I’ve ever met. Our conversations were sparse though we spent weeks across the hall from each other at the same recording studios in Los Angeles in the ‘80s. Some of the comments MJJ made to me during a conversation belied the depth of perception the man had of the world. Some of them I came to understand and appreciate only years later when my level of awareness evolved enough for me to fully grasp. And I’m sure I’ll never fully grasp some of his comments. Don’t get me wrong. Our brief talks weren’t super deep. But behind his words about what seemed to be simple everyday observations back then, when viewed in my personal rearview mirror from where I stand now, they displayed a deeper understanding than I realized at the time.

Somehow Jackson’s clarity of perception allowed him to bridge the distance between feelings and lyrics/music better than most. His ability to do that is what made his recordings so special and evocative. It’s no coincidence that Jackson’s work exploded into popular culture with ‘80s records Off the Wall, Thriller and Bad, riding the crest of the first wave of digital audio.

“I got the music in me…” — Kiki Dee. It was in the 1980s when digital audio really revolutionized the recording industry. Though I engineered the very first digital multitrack recording of a pop artist with Stephen Stills in February of 1979, it wasn’t until 1984 that the compact disc became commonly available to the public. That was also the year MJJ walked away with eight Grammy Awards (shutting out my engineering contribution with Manilow’s 2 a.m. Paradise Café).

Up until the development of the smartphone, audio recordings via compact disc and eventually MP3s were the first great exposure the overall public had to digital science. Even though digital math — base two, the binary system, 1’s and 0’s — was invented in the 17th century and digital audio theorized in 1929, it was the 1980s that saw digital transform society, culture and mankind.

We now live in a world where every human experience can be digitized, quantized, reduced to a 1 or 0. We have altered reality, created virtual reality and reached the pinnacle of the scientific Pyramid of Power. Digital math, only a couple hundred years old, has now been applied to social engineering. What we are seeing around us as the most powerful, discrete, unbridled polarity in human history is synergistically coupled to our digital experience. Human civilization has never been at this point before (that we know of).

“Battle lines being drawn…” — Stephen Stills. In politics it’s red or blue, left or right. Religions, gender wars, friend/unfriend and black or white. There seems to be little or no middle ground or conciliation. We have actually become a reflection of the most base reality. We have finally reached the point where humankind must confront the only two emotions there are: Love or fear.

We live in a constant state of mistaken identity. While we continue to think of ourselves as individual physical bodies rather than what science irrefutably tells us is true, that we are nothing more — or less — than an energy field and not solid matter, we will remain in the state of choice between Love and fear.

The point is that humankind’s intellectual development of technology cannot stray so far from metaphysical reality that it fails to echo or reflect that reality. Our technology has continued to move us through the illusion of time in such a way that even our technology is now pointing to the ultimate finality. Eventually we will find out where that leads.

We see radical polarity all around us now and it’s most rampant and obvious in the media that we use most now, so-called “social” media. Technology has provided us with an insulation between beings that interferes greatly with the message. As Marshall McLuhan once wrote, “the medium is the message.” Digital technology has transformed information exchange, making it almost timeless. We can communicate in the “now” more than ever before. Virtual reality essentially has no past or future, only the speed electrons traveling at the speed of light prevents us from experiencing everything at once.

Technology has also insulated us from our physical experience. For example, we no longer listen to our body about what food is good for us. We judge based on what digital information or reductionist science tells us. We analyze data rather than experience how the food makes us feel, long- or short-term. We have become data-based, not experience-based. We pay less attention to how our body as a physical system feels than to what our smartwatch tells us about our body. That’s not smart.

But here’s the good news. We are still progressing. We are getting very close. We have evolved from analog technologies like biology, chemistry, physics, analog math — to the point of the intense overall duality of digital technology. What is the next step beyond duality, is the question. That is a simple answer: singularity.

Social consciousness is providing all humanity the opportunity to choose to be part of duality or move on to the next step. And that alone is a source of fear to those who struggle to release the ego and individuation.

Once we cross that portal to singularity, it’s going to be a wild ride. Black or white will no longer be a color at all.