Home » Heartland Healing » Love or Fear? You Get to Choose 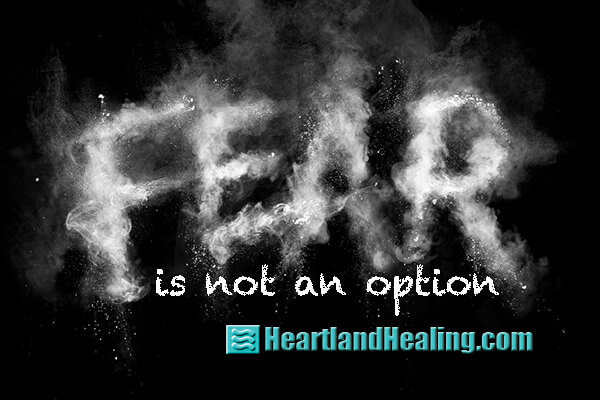 I once heard a psychiatrist on the radio who worked with children afflicted by a form of dysfunctional anxiety. Listening, I heard our psychiatrist make a common but grievous error when she said that “a little bit of anxiety, a little fear in life is necessary; it is normal. It motivates us to do things.”

That’s a thought system that cries out for correction. Our friend the shrink had fallen prey to the same illness she is trying to cure. Fear may be common but the belief that fear is a useful or even sometimes beneficial, motivator is the mistaken belief system that perpetuates fear’s existence. Fear is never good; period. That belief is the illness we should be seeking to cure. The only motivation fear should bring is to choose again.

Fear or Love. We live in a digital world. Computers and digital mathematics have increased our power over the physical world because they are simple. They work on the principle of “yes” or “no.” Science has literally reduced every single form, idea, experience and function to a digital “1” or “0.” There is no gray area. It’s one or the other now. We have advanced from the analog of continuously variable data to a system of duality. In the same way, the expression of our experience is just as simple. Everything that we feel can also be reduced to polar opposites. The two emotions are Love and fear. Everything we feel is one or the other.

We choose which motivates us on a moment to moment basis. From one comes all that is good. From the other comes everything that has plagued mankind throughout history. Whenever fear is the motivating emotion, pain and suffering result. It can’t work any other way.

No “healthy” fear. It doesn’t take a glut of scientific research (and there is plenty) to realize that fear in any amount is unhealthy. Trust your own experience. How does fear make you feel? Is there any part of fear that feels good? Every connection you can make with fear can be linked to uncomfortable feelings, both physical and emotional.

With fear, our bodies contract, stomachs tighten into a knot. The naturally healthy flow of energy through our bodies constricts and slows down. Systems shut down rather than open up. Even in times of greatest threat, remaining calm and operating from Love is healthier.

Look at it on a bigger scale. The two energies, Love and fear, either expand or contract our awareness. Love expands and includes, fear excludes. Universally speaking, it all started with the Big Bang.

Big Bangs or Lester Bangs. Imagine the Beatles singing “All you need is fear, da-da-dada-da.” Ludicrous, right? Yet when we say “a little fear is healthy,” we might as well be singing that. We must change what we are teaching when it comes to fear. Fear is the opposite of progress, the opposite of evolution, and it has been that way for a long while.

Our scientists are constantly trying to “figure things out.” They do a pretty good job of it too. It’s fun. It’s almost like it matters. One of the things we’ve figured out is how we think the physical universe began. We say it started with a Big Bang. It has been expanding since that time. Some sort of energy keeps pushing the universe, everything in it, including us, into expansion mode. Great minds like Einstein have sought to equate and define that energy, seeking to understand the so-called Unified Field. Whether it’s pop music or pop science, it says the same.

Now what if we recognize what it feels like to be in sync with that energy, to go with the flow rather than against it? We would be using energy rather than resisting it. (Resisting energy will always get you into trouble. Sticking your finger in a light socket is not a good thing.)

That resistance to the energy of the universe is fear. Trying to control the physical universe by resistance is going to be pretty taxing on you and your body. It’s like you might as well be in a fight with God, so pack a Snickers bar — you’re going to be busy for a while.

Roosevelt was right. It’s time we take our own advice. We have more important things to do than constantly do battle with fear. Get over it! And this is not an original idea. Leaders, literature and teachings throughout our history continually remind us. The bible reminds us “perfect love casts out fear.” FDR reminded us that fear itself is our only problem. The character portrayed by Rip Torn in Albert Brooks’ hilarious send-up of metaphysical obsession, Defending Your Life, reminds us that we humans devote almost all of our time on Earth dealing with fear. Ain’t it the truth! And aren’t you about ready to stop it?

Using our considerable mental talents solely to carry out the bizarre plans we hatch to try to protect ourselves is only bowing to fear. Our mental efforts become like a dog chasing its tail. We declare fear real and even useful and then busy ourselves fighting with it. We have more to do.

With that perspective, we must see that choosing Love as our operating system is not only better for us individually but helps the entire planet get over this obsession with fear. We are ready for the next step. And what is more powerful than duality? Singularity! Make the one choice Love.

It’s understandable that our radio psychiatrist learned it wrong, what with fear as a teacher. The example statement “Fear is what keeps me from walking in the street and getting run over” can be countered simply by “Love of walking on the sidewalk does it for me.”