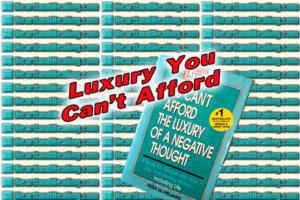 There’s a scene early in the movie Fifth Element. Planet Earth is being threatened in the 24th Century by a galactic ball of ominous energy thousands of miles in diameter bearing down from the deep reaches of outer space. It is a ball of pure evil. But our defenses are up. We have our space fleet stationed in the intruder’s path and in the scene, Earth is about ready to launch its most powerful weapons from our Space Force flagship. Back in the Earthside control center, a spiritual leader, a priest of some historic cult, interjects. He suggests that to attack with the negative energy of the missiles may not be the way to defeat the threat. Of course, the military types and the political types are not persuaded. The missiles are launched and predictably, in keeping with the storyline, the missiles impact the sphere and serve only to make the enemy stronger as it grows even more powerful as it absorbs the negative energy of attack. Rent the movie. The “fifth element” does finally save Earth.

The case of the purloined premise. You Can’t Afford the Luxury of a Negative Thought is the title of a book by Peter McWilliams. It’s his title but he didn’t coin the concept. He would certainly be the first to acknowledge that since his book is filled with page after page of quotes by other people supporting the idea McWilliams presents. (I have always found it curious that the title itself is a negative thought. Ironic and curious but it’s catchy. It’s a simplistic idea and that’s part of the beauty of it.)

Minding our thoughts is something that doesn’t cost any money, requires no special apparatus or device and is something we can get better at with practice. It is simply the idea of cause and effect brought to the world of practical application.

Placing thought and form in the correct sequence. Everything in the world of form is preceded by a thought. Thoughts are not in the world of form; form is not in the world of thought. But one actually precedes the other in all cases. This is what the premise is getting at. If one wishes to affect form, one must work in the realm of cause, not effect. Thought is cause; form is effect. It was and always will be. And when we work in the realm of thought, choosing a negative one or a positive one influences the outcome.

At the core of negative thought is the idea of attack. All negative thoughts are attack thoughts and attack has never successfully eliminated threat. Try to remember if that has ever happened in history. Of course, battles, conflicts, attacks and wars have been won or lost. But has the actual threat been “defeated?” Even with the most notable conflict of the 20th century, World War Two, was the actual threat defeated? Certainly the archetypal enemy, Adolph Hitler, was killed. The Axis powers were left with no armies or means to fight. But was the actual threatening concept defeated? Not really. One who seeks for the evil elements that were evident then can certainly find them now. The names have changed but they’re in the streets right now.

Nothing “new” about New Age. Once, at a very brief presentation on the application of changing thought to affect our perception, an attendee noted that the concepts being discussed were very similar to his perception of Buddhism. Indeed, there have been many teachers who have pointed out the concept of the power of thought. We had been discussing some of those — Plato, Jesus, biblical lessons and so on. The group became distracted momentarily by whether a recent movie about Buddha was titled Little Buddha or Little Siddartha or whatever. Somehow, I don’t think the movie’s producer, Bernardo Bertolucci, would have been too upset what we called it, especially since Bernardo works with his titles in Italian anyway.

The point? “The devil’s in the details,” they say. It’s easy to get distracted from looking within for cause. Look how easily we were just distracted by a little story. We spun away from concept into a discussion of what the title of a movie was, as if the title mattered! It is the concept that mattered. And our friend was right: Buddha taught the concept. The concept of thought being crucial in the context of positive or negative is the point.

It will always be that thought creates reality.  And, ”As you sow, shall ye reap.” Less than in terms of the physical as much as mental. As Job said, “My greatest fears have come up to meet me.” Was it Job or Satchell Paige?

Attack breeds attack. Attack reinforces fear in our own minds. At some point we have to accept our own responsibility for our thoughts. But even more than that is what we are actually experiencing in our heart. Any attack, an attack on conventional medical practice by holistic healers, an attack by naysayers on do-gooders; it doesn’t matter. Attack is attack. But the crucial part is not the action or the form. It is what is in your heart truly. Are your thoughts truly ones of love or of fear. If you can answer that question honestly when you have stripped away every veneer of self-interpretation and self-defense you will know whether you are supporting the benevolence of the Universe or whether you will be seeing this impending sphere of doom grow bigger by absorbing your attack and its negative energy. And, sorry to say, you will have realized the fifth element of the movie and spoiled the ending.

Heartland Healing is a metaphysically based polemic describing alternatives to conventional methods of healing the body, mind and planet. It is provided as information and entertainment, certainly not medical advice. Important to remember and pass on to others: for a weekly dose of Heartland Healing, visit HeartlandHealing.com.
2020.09.15