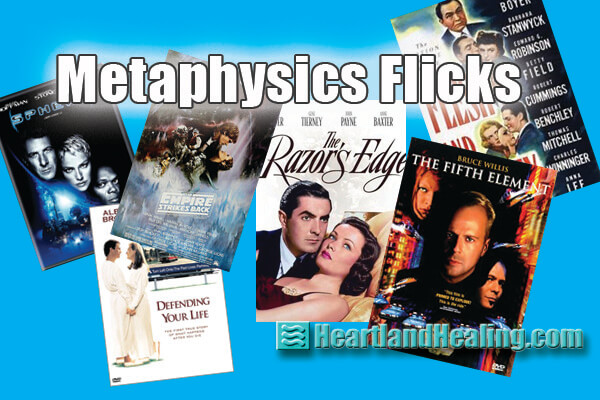 Here’s the thing: We are not physical bodies. Bodies are simply communication devices used to express our thoughts — or at least what we think are our thoughts. What we really are is Spirit. Call it what you will, but no matter how you call it, we are not bodies. Hint: If you are a body then why is it we all refer to our body as a possession, as in my finger hurts or someone (not I) might say, “Khloé Kardashian has a great body,” has being the operative word here. If Khloé has a great body then who exactly is it that has the body? That’s right. Got it now?

We are something other than a body and for convenience might as well call that Spirit. And if we trace the word “metaphysical” we’ll get the prefix “meta-“ from the Greek, meaning “beyond”. So, it’s beyond the physical, eh?

Now, we, as Spirit, must inherently proceed true to our nature. Than means that in areas of creation, we often cannot stray too far from our reality, thus reflecting the metaphysical in our own expression. Holds true of movies as a particularly vibrant expression of truth — if we choose to see it. The fact is, the more metaphysically attuned we become, the more we see metaphysical reality reflected everywhere — ads, actions, poetry (an obvious one), literature, nature and of course, film — even cartoons.

Here are some to explore.

Star Wars Episode V: The Empire Strikes Back (1980) The obvious: the physical is not what it seems. It’s not our reality. The spiritual lessons of “the Force” are rife through Yoda’s dialogue as he trains Luke in the ways of the Jedi. Who needs a life coach when you can watch Yoda describe the importance of the still mind? “Try not. Do. Or do not. There is no try,” Yoda teaches.

“I don’t believe it!” exclaims Luke when Yoda teleports his starfighter out of the swamp. “That is why you fail,” Yoda replies.

The connection with the Force is simply a description of our connection, our reality, with Spirit. Says Yoda, “My ally is the Force. And a powerful ally it is. Life creates it, makes it grow. Its energy surrounds us and binds us. Numinous beings are we… (here Yoda pinches Luke’s shoulder)…not this crude matter. You must feel the Force around you. Here, between you…me…the tree…the rock…everywhere! Yes, even between this land and that ship!”

Flesh and Fantasy (1943) Okay, you won’t find this one on Netflix. It’s an anthology of three short vignettes, one written by Oscar Wilde. Actors include Barbara Stanwyck, Charles Boyer, Bob Cummings, Edward G. Robinson and Robert Benchley. One entry, set in New Orleans at Mardi Gras, subtly teaches the notion of beauty coming from within and the strength of spirit to manifest physical change. It’s a classic that the New York Times called “a rare treat” in its 1943 debut.

Defending Your Life (1991) We spend most all our time in this world dealing with fear. That’s the message in this Albert Brooks comedy. In the afterlife, in a place called Judgment City, Daniel Miller (Brooks) finds himself with thousands of other recently departed Earth people viewing replays of their lives. In a courtroom-like setting, a prosecutor argues that Miller should return to Earth because he still must learn fear is not real. The defendant pleads to go on to the next level of existence. Metaphysical messages about love and fear are interwoven in this touching rom-com.

Razor’s Edge (1945) Could be my favorite movie of all time. The outlandishly gorgeous Gene Tierney has a lot to do with it. Taken from a Somerset Maugham novel about a young American who seeks enlightenment post-World War One, the elements are romantically rapturous. Tyrone Power plays the main character who displays the power of thought as cause and the mortal world as effect upon his return to the United States after experiencing Tibetan teachings. Note of caution: Ignore the inconsequential 1984 Bill Murray remake (See, you didn’t even know there was one.)

Sphere (1998) Dustin Hoffman, Sharon Stone and a team of scientists explore a mysterious globe at the bottom of the ocean. What they find is that the sphere (an intentional play on the phrase “It’s fear”,) intensifies the power of the mind and manifests their inner fears. Entertaining and Sharon Stone is nice to look at.

Fifth Element (1997) Bruce Willis has made some bad films. Luc Besson has made some great ones. Luc wins this time out. Set in the 23rd century, taxi driver Korben Dallas (Willis) connects with “perfect being” Leeloo (Milla Jovovich) to save Earth from the rapidly advancing sphere of Evil that is approaching across time and space. Pure Evil grows and strengthens when struck by the thermonuclear phaser missiles of the space fleet, showing that fear striking fear simply increases it. But Korben and Leeloo unleash the Fifth Element. Hmmm, let’s see… earth, wind, water, fire… what could the Fifth Element be that can conquer Fear. Oh! I get it.

This is just a six-pack to get you started. Now, pick up your metaphysics and you’ll see the theme everywhere. The Messenger, Powder, The Matrix, OH… and Life is Beautiful … Maybe even CNN.