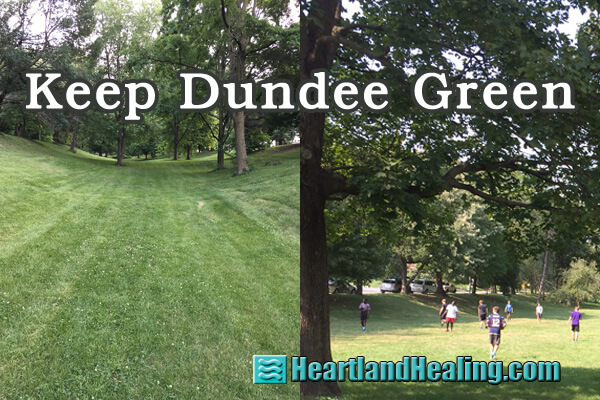 “Nature deficit disorder” is the phrase Richard Louv coined in his best seller, Last Child in the Woods. Without dispute, it’s an apt description of the malady suffered by today’s children. The more we isolate kids from the challenges that nature provides — a little dirt under the fingernails, a skinned knee now and then, exposure to different bugs, bacteria and viruses — the more asthma, flu, illness, allergies we see. The fact is that adults, too, suffer from nature deficit disorder. The more exposure adults have to nature, the more productive they are, the healthier they are and the happier they are. So let’s get one thing straight: trees, grass, green space — those are nature. Cement, electric lighting, irrigation systems, pergolas and concrete benches? Not so much.

History. Omaha is a lucky city. Somehow we drew the attention of some real forward-thinkers in our nascent years of the 1800s. One of our luck-outs was connecting with a guy named H.W.S. Cleveland, a visionary landscape architect of the late 19th Century. Cleveland believed in green space. He knew that encroaching urbanization led to air pollution and disconnection from the health benefits of nature. Cleveland designed city plans and knew that green spaces, trees and plants cleaned the air, provided soil for water drainage and offered respite from the chaos of “civilized” life. Omaha hired him to design and layout an ambitious system of parks, linked by boulevards. That system still exists and is listed as a National Historic Place. It’s important to note that the original purpose of those parks and boulevards was to provide passive relief from the rigors of city life, a buffer that allowed nature to be nature. Even in the growth period of the 1800s, people realized that the more macadam, pavement and buildings you erect the less opportunity the earth has to protect itself from deluge, a lesson Houston admits it ignored.

Cleveland himself was an adherent to the philosophies of the acknowledged Father of Landscape Architecture, Frederick Law Olmstead. Olmstead pioneered the idea of the modern urban park all the way back in the 1850s. His most famous designs are New York’s Central Park and San Francisco’s Golden Gate Park. Plain and simple, Olmstead saw the urban park as a retreat from development, citing healthfulness. He wrote that urban residents needed to “escape at frequent intervals from the confined and vitiated air of the commercial quarter and supply the lungs with air screened and purified by trees…” Olmstead and Cleveland after him recognized that the best purpose of urban parks and boulevards was the green space they gave.

Boulevards were never meant to be parks. As society became even more urban, leaving behind the physical exercise of rural life, formal recreational opportunities became necessary and parks did evolve to include some structures like ball fields and pergolas. But in the grand scheme, the role of boulevard parkways remained as green-space links to those parks, not centers of activity, but rather a peaceful green place of retreat ensuring a buffer. That is the true history of the design.

Along comes a bad idea. Barely a dozen years ago, Dundee was still an actual business district and neighborhood that had evolved organically — not by city fundings, TIFs or monster development companies. It became trendy because it was organic and outsiders saw opportunity. Only a few short years ago, the mainstreet area of Dundee featured a full-service drug store (with a soda fountain), a large hardware store (Steve and Mary sold us our gas grill during a snow storm one winter), a Hinky-Dinky grocery store, a gas station with an actual mechanic and service bay, a bookstore, a bank, a dinner theatre, a framing store, a candlemaker, a legendary Italian restaurant (Trovato’s), a convenience store (Gramp’s) and… Lady Caroline’s Tea Shoppe. All of that is gone. Now Dundee business district has more liquor licenses than cottonwood trees. It’s mostly restaurants and bars fighting it out for the disposable entertainment dollar. Now more than ever, the tradition of Dundee needs defense.

Revisionist? A group of business people and real estate developers have taken it upon themselves to further the “improvement” of Dundee by taking away the last remaining green space in the neighborhood. It’s an area along Happy Hollow Boulevard that was set aside over a century ago to provide just that kind of green, quiet respite its designers envisioned. Between Underwood Ave. on the south and roughly Western on the north, the green space is part of the boulevard system. Its very designers emphasized that trees, plant and greenery are its essence. Even the city’s own park department has continually said that removing even one tree would be a detriment. But this new group wants to pave, build a pergola, place sidewalks, lighting, planters, trashcans and even an irrigation system in where one has never been needed before. It’s a 2 million dollar project that should never have commenced. But commenced, it has. They even call it a “restoration”. It is hardly that. That’s “fake news.” There never was a pergola. There never was irrigation. There never were sidewalks down there; never lighting or planters. Just green space.

Still she persisted… Now the Big Wheels are rolling forward having convinced the city to earmark tax money to be spent in contradiction to its own evaluations. It may be too late to stop. Let’s hope not. It’s the last little part of Dundee that is left to the imagination of the kids who play down there all the time. It’s naught but green and that’s the kind of green we need, not a 2 million dollar mistake. If you look closely, you may see the last child in the woods down there actually using her imagination, hanging out with Mother Nature.