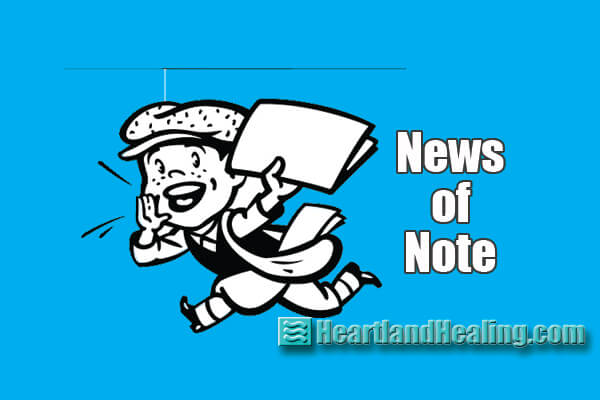 Ah, my friends, it’s been too long since we’ve harvested a random sampling of news of note. All of us have our various default news aggregators. For some it’s google, (gag); for others Twitter or Facebook (shudder) and some of us just don’t care so the news gets to us randomly. But you may have noticed that we all get the same stories with the same slants. Well, Heartland Healing  is here to wade through the mainstream and dig out a few nuggets that are so rich in vital minerals that they are nowhere near the scum on top of the pond. We dive deep to find the stories you may have missed and that have impact on the bigger, holistic picture. If you run across any of these kinds of stories, send them along to michael@heartlandhealing.com.

Monsanto: We are Bound by the Food Chain. Well, it was impossible to bury entirely because it’s the takeover of the largest seed-owning company in the world by the largest techno-science company in Europe when Bayer bought Monsanto for $66 billion. It is the largest cash buyout in history. Now an Evil Giant in the GMO owns the Evil Universe of GMOs. We won’t have Monsanto to kick around anymore because Bayer is dropping the name. Whatever happened to anti-trust laws? Now, by far, the mega-corporation will control agricultural seeds and pesticides. Ninety-nine percent of all agricultural seeds in the world are owned by about six companies. And they own the turnkey poisons farmers must spray on them.

Don’t look for any new “March Against Monsanto” initiatives in the future. It’s a shell game and it will have to be “Banish Bayer” but as long as the Western world gobbles up cheap food leading to out-of-sight healthcare costs, the Techno-Pharmaceutical-Agrichemical industry will just keep adding hyphens to control the populace. They sell us seeds that grow the crops that need the chemicals that make us sick so we have to buy their drugs to keep us alive. Watch for Nestlé and water in the next chapter.

More on GMOs Didn’t see this at the top of mainstream news pages: Last week Japan began rejecting all Canadian wheat because of finding GMO wheat in Canada. Okay, dig it: There is no country on earth that allows GMO wheat. Not one. Monsanto was testing GMO wheat but was ordered to stop way back in 2005! But officials in Alberta noticed rogue wheat stalks growing in a roadside ditch that had been sprayed to kill weeds. The wheat survived, was inspected and found to contain a GMO trait developed decades ago by Monsanto. Spokespersons said, “Uh, we don’t know where it came from…” Look, when you go down that road of trying to fool Mother Nature, you’re gonna lose. #JurassicWorld

Drive, She Said News flash to Millennials: Flying used to be so much fun. Pre-9/11, passengers were actually treated like customers. And before that, like honored guests. Heck, in the ‘70s and ‘80s, my buddies and I would think nothing of catching a 747 red-eye from LA to JFK just for a long weekend. Party time all night with the stews down in the galley and upstairs lounge. No more. Seats are smaller; policies are draconian and your health is at risk in the new planes with so much crowding. Altitude, decompression, bad air, radiation are all contributing factors for things as deadly as deep vein thrombosis and more. Legendary filmmaker George Lucas avoids flying at all costs for a number of reasons, saying that in the near future we will look at flying as stupidly health risky as smoking. Now a new report describes exactly how viruses are spread throughout a plane’s air system. The cabin refresh system isn’t efficient enough to counteract the proximity effect of being around so many potential Typhoid Marys. Take the bus.

Throw in the Towel. Heartland Healing brought this up observationally several years ago. Those damn stupid hot air hand dryers in public restrooms are the most ridiculous things ever invented — and just to cut down on the drudgery of actually keeping the bathroom picked up. A new-fangled dryer called the Air-Blade really caught my attention when I looked inside it and saw pools of water from the dripping effluent of previous users. I correctly assessed that this was not the best way to dry one’s hands, i.e. sticking them in a machine that some previous user’s rinse water had been pooling for God knows how long. Well, turns out that blow dryers in the loo spread around poo. So says the research. Further analysis of the aerosol droplets when someone uses those things shows that poop particles are the least of your worries. If you’re in the room when an air dryer is activated, an antibiotic-resistant bacteria is 60 times more likely to be floating around than when the air is still. Thanks, Dyson.

There’s more to know from the news so tune in later and send your emails in, too.