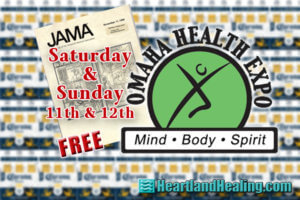 Cardiologist Richard Collins said it succinctly. “If I’m in the ER with a heart attack, I don’t want the doc to come in and put a broccoli sprig on my chest.”

Dr. Collins was speaking during an interview on the Heartland Healing television program and at the time was chief of cardiology at a major Omaha hospital. Dr. Collins was saying that there is a time for Western medicine to jump into the fray and a heart attack is one of them.

But when it came to heart disease, Dr. Collins had a different approach. Heart disease at its worst presents as occluded coronary arteries, blood vessels blocked with plaque and junk from the typical American lifestyle. Dr. Collins revealed something remarkable. As cardiologist, he had stopped using drugs and surgery to reverse the blockage of heart arteries. Instead, Dr. Collins was adhering to the protocol developed by Dr. Dean Ornish, a California cardiologist, called the Ornish Program.

Described briefly in terms Western minds found understandable, the program had simple basics: extremely low-fat vegetarian diet, light exercise, meditation and group support. He directed and provided the program at his hospital. In Dr. Collins’ research, he found 87 percent of his patients saw complete reversal of their heart disease following the program, entirely without drugs or surgery. Statistics had shown that conventional angioplasty required a redo within five years. Not so with the Ornish Program as described by Dr. Collins.

JAMA brings it. That Heartland Healing program aired over 20 years ago. It was a time when interest in holistic, natural alternatives to conventional medical treatments was breaking news. Yes, Linus Pauling and James Reston served to open the door back in the 1970s with a book on Vitamin C and a column on acupuncture, respectively. But it was the late 1990s when the public really began to embrace what was then called “alternative medicine.”

The Journal of the American Medical Association, for better or worse, happens to be the vox populi that defines legitimacy of medical adventures in the United States. A landmark November 1998 issue of JAMA gave America a look at the changing views on several non-conventional medical practices. Citing medical opinions and extended research, that issue framed the surging tide of public interest. It’s worth recognizing that issue as we head into the weekend bringing the 13th annual Omaha Health Expo to the Baxter Arena.

Appropriately, the 1998 JAMA cover reproduces the frontispiece of the 1491 publication Fasciculus Medicinae, the first recorded illustrated medical book, a book that changed the practice of medicine in the 15th century. The articles and research in the 1998 JAMA describe medical practices that were undeniably practiced in the same century Fasciculus Medicinae was published (1 )! Modern medicos should find that astounding. Even more notable, the 1998 JAMA finds the majority of those modalities are proven to work.

When an April 1998 JAMA issue (2) presented research showing over 106,000 Americans die yearly from properly prescribed and administered prescription drugs, the fuse had already been lighted. The November issue was the detonation.

Expo the rescue remedy. Conventional Western medicine, basically a techno-pharmaceutical approach relying on drugs and surgical interventions for primary responses to medical woes, did not take the wave of “alternatives” lying down. Does one think that the number of prescription drug deaths has declined since 1998? That would be difficult to fathom. Conventional medicine is still looked at as the “be all and the end all” in 2020. While Google University provides any number of sites and pages touting holistic and natural modalities, conventional medicine has exploded. All one needs do is look around at what industries continue to expand even in economic downturns.

One has to ask the question, “Are drugs and surgery the only chances we have for getting healthy and staying healthy?” There was a time when the answer to that question was obvious. Americans need to be reminded that there are traditional therapies that even Western medicine cannot hide. Richard Collins knew it. Dean Ornish knew it. Physicians of the 15th century knew it and even doctors of the 21 century know it. We all need to remember.

Heartland Healing is a metaphysically based polemic describing alternatives to conventional methods of healing the body, mind and planet. It is provided as information and entertainment, certainly not medical advice. Important to remember and pass on to others: for a weekly dose of Heartland Healing, visit HeartlandHealing.com.
2020.07.07