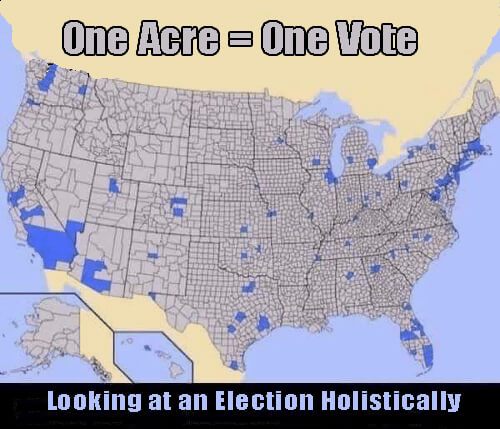 Upton Sinclair wrote, “It is difficult to get a man to understand something when his salary depends upon his not understanding it.” Substitute “social existence” or “lifestyle” for “salary” and you’ll get a good idea why a lot of people will have difficulty understanding what I’m about to write.

When you read, do your best to banish that toxic word “but” from your mind. “But…” will lead you down the road of distraction into the Sea of Despair. Save your “but.” Also when you read, bear in mind that as with any exposition, there will be exceptions found in the microcosm; the nefarious “devil in the detail.” That is why we are looking at this globally and not microscopically.

In the city, I get up on a Wednesday morning and step onto my front porch and my concerns are whether the trash was picked up, how much traffic is on the freeway, if my favorite barista will get my latte just right. My day is dictated by society and a closed system of government directive.

Down in Pawnee County, my friend Paul steps out onto his front porch in the morning and looks at the sky, the wind, the grass, the weather. He looks at his animals and where they may have roamed and what predators may have visited in the night, where the flocks and herds have to go today for food and water. What he will do that day is determined by Nature, something bigger than he.

Death Star. Is it possible to kill a planet? No one really knows. I say it is possible. We don’t know if perhaps that one, last chunk of polar ice may fall off and the weight of the poles is displaced and the whole ball tumbles off-axis into a wobble that spins off our protective atmosphere. We’d be toast, literally, within maybe minutes. The planet would end up resembling those glaring examples we have so near by, Mars and Venus; as far as we know, lifeless. It could happen.

What we do know is that we’re polluting water. We’re polluting air. We’re melting polar caps. We’re raising temperatures globally to near intolerable levels. We’re killing a planet as we live.

Now anyone who is beyond the “milk comes from cartons” stage realizes of course that the greatest damage to the planet is occurring from the areas outside the cities. Corporate livestock production and corporate farming are the two biggest polluters. Fossil fuel extraction isn’t happening in the cities, though when I first moved to Los Angeles there was an operational oil well right on the corner of Beverly Boulevard and La Cienega. We’re extracting fossil fuel in rural areas. (How’s that working, Oklahoma, current earthquake capital of the world?)

Now, jump easily here. Who — and I write “who” correctly since Citizens United has given corporations anthropomorphic status — who is perpetrating this destruction of the planet and where do they live? Yes. It’s the global corporations that exist in those same strongholds of the “blue” vote. Those corporations do not live in Chadron, Abie, or Steinauer, Nebraska. They don’t live in small towns in the Dakotas or Kansas or Nevada or even the small burgs of California or upstate New York. Those corporations live in the crowded cities and urban areas along with the humans who depend on them. Those corporations are well-entrenched but their tendrils roam far and wide, controlling the corporate farms and shale-fracking enterprises of the Bakken, building the pipelines across the land where those “other” Americans, Native Americans, live.

Forget “blue states” and “red states.” Drill down into the map by counties and you’ll see how overwhelmingly the people who live close to the planet see things. They want less government and more Nature, by and large. And as far as saving this planet, looks like government hasn’t gotten it done. Nixon created the Environmental Protection Agency by Executive Order in 1970, the Clean Water Act followed in 1972. How’s that working for you 50 years later? No president or politician is going to get it done. Only we are. And not by mobilizing to elect yet a different politician who won’t get it done. Duh.

We Are Not Alone. City-dwellers live and see only human society. We are basically onanistic navel-gazers. Oh, for sure, there are those who “support” our brethren at Standing Rock or the whales or organic farming or green energy then go home to their city life. But bear in mind, intellectualizing something is not the same as experiencing it, living in it, immersion in it.

News Alert: Humans are not the only species on the planet. We may not even be the most important one. We are certainly the most destructive one. No plague of locusts or frogs or emerald ash borers compares to the wanton destruction humans can do with one blown-out oil platform in the gulf.

Make no mistake. These words are not an endorsement of an elected candidate or even a political statement. This is an observation of the interests and environment in relation to how people voted, just looking at the map. Social issues are important. But nothing is more important than planetary issues. Maybe, just maybe, we should listen to the few people left who still experience living in and with Nature and the planet. We don’t have anywhere else to live.