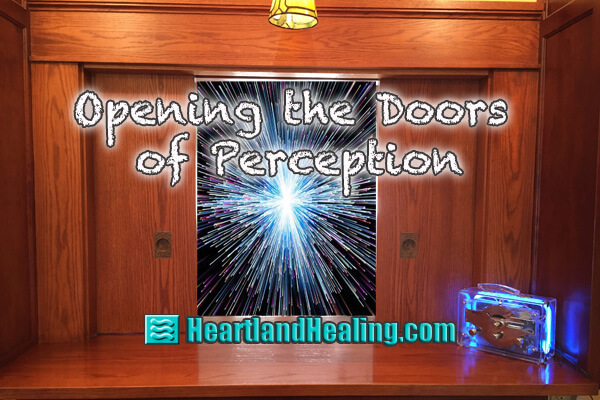 Opening the Doors of Perception

WYSIWYG is sounded as “wizzy-wig.” It’s a rather dated term from early in the computer age, a pronounceable acronym that stands for “what you see is what you get.” It refers to computer-screen user interface that implies that the appearance on the screen accurately reflects the underlying computer code that created it… or something like that. Let’s just say that what you see is what is real. And therein lies the rub. Is what you see what is real?

Perception is the word we use to describe the way we experience the panoply of all human existence. Perception is not limited to physical things like trees, cars, bodies or buildings. Perception includes sounds, smells, relationships and thoughts — all parts of the human experience.

Humans have a tendency to think “seeing is believing.” In actuality, it’s the reverse. What we believe creates what we perceive. And thusly, the breadth and depth of our field of experience can be expanded or contracted and in fact, is malleable, based on the belief in our mind.

Shift sticks. One of the simpler ways to describe how perception is influenced by our mental attention is to consider what kind of car you drive. Do you drive a Honda Civic, for example? Because if you do, you see Honda Civics everywhere, don’t you? Why? Because Honda Civics occupy a significant part of your mental attention, your mind. I never notice Honda Civics because I don’t think about Honda Civics. I drive an Audi so I see Audis everywhere. But I never noticed Audis when I drove a Ford Explorer. I noticed Ford Explorers. Get it? When it’s in your mind, it’s in your perception.

Another, more blunt and radical way to experience the changeability of perception is with a chemical intervention, a substance that might be said to affect the brain and open the mind to experiencing things differently. Sometimes called a psychedelic or mind-altering drug and sometimes known as an entheogen, these substances are often said to somehow change the chemistry of the brain to make the brain influence perception. I say it’s the other way around: those substances shut down the parts of the brain that are restricting and interfering with our ability to allow our thoughts to see reality as it could be and eventually as it really is.

Dosing and micro-dosing. I will always remember the first time I took a dose of LSD. It was a long time ago and it was called a “Blue Barrel.” Within a very short time my perception of “reality” changed radically. From that experience and a few others like it, I learned that the doors of perception are not locked. When the shackles of brain chemistry are released, thoughts are easily recognized as the authors of physical and emotional reality. My thoughts, not my “brain,” control my perception, my reality and yes, my body. The body is simply a projection of my thoughts.

That dose unlocked the doors. After a couple of times using that key, I realized that I could simply leave the door unlocked and open it whenever I wanted without borrowing the key each time. Understand? Once you learn that the door isn’t sealed shut anymore, just give it a gentle nudge with your own hand and it opens easily.

“A little dab’ll do ya…” Showing my maturity again, I am. That’s from an ancient TV commercial. But it holds true as a description of the trendy use of small doses of psychedelics like psilocybin, dimethyltryptamine, ayahuasca or lysergic acid diethylamide, often called “micro-dosing.”

This micro-dosing is commonly associated with therapeutic use of hallucinogens at a low enough dosage that the doors to perception are not necessarily unlocked, making it supposedly safe to do ordinary life tasks like working or interacting with your local barista. The process is said to help with depression, anxiety and other unpleasant mental states. Some users have even described micro-dosing as helping them push some sort of “reset button” and control obsessive thoughts of depression, sadness or anger. I’ve heard of medical doctors advocating and even supplying the drugs to patients. That’s how mainstream the practice has become.

Write on. Dating myself again, I am. Punning a Black Panther slogan from the ‘60s. But Michael Pollan, resident of the Bay Area, the spawning grounds for the Black Panther Party, has written a new book about the use of psychedelics. He titles the book, How to Change Your Mind. He describes the many ways the mainstream is embracing the use of psychedelics. That’s good. More people should. Pollan covers the range beyond micro-dosing, extending to full-on tripping and its therapeutic value. This is not new territory when one recalls the advocacy expressed by Dr. Timothy Leary, Owsley Stanley and others in the past century. There is value in “losing your mind,” Pollan contends.

What I believe is important to note is that using a psychedelic is not a case of “losing your mind,” but rather “finding your mind.” The mind and the brain are not the same thing. If anything, the brain encumbers the mind, carburates it, restricts it.

There are ways to free the mind without chemical keys. And in any case, once you have unlocked the doors of perception, why do you need to keep putting the key in the lock? More on this later.