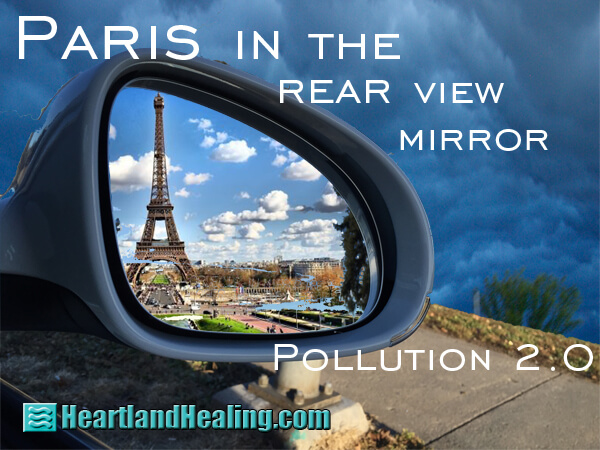 While the media world has its panties in a bunch over Trump deciding to ignore the Paris Climate Accord, we ignore pollution that presents danger far beyond carbon emissions covered in that symbolic international agreement. And something’s fishy when multinational corporations like Monsanto, Coca-Cola, DuPont, Intel, Microsoft, Pacific Gas & Electric, Exxon, Shell and BP offer unfettered support for the accord. That list of environmental rogues isn’t on my besties list. Even Elon Musk has lots to gain economically from the Paris Accord provisions. I’ll always be skeptical when politicians step in to “help” with anything.

So while teeth are gnashing and snowflakes are bashing, there are greater concerns being ignored. Because the media doesn’t dwell on them, these pollutants are on the short list of what I’d change right away.

Diesel exhaust. You’ve been in traffic behind a school bus, right? Or a diesel city truck,  pickup or delivery van? How is it that they get to belch black clouds, spew suffocating smoke from their pipe holes? That exhaust is some of the most toxic, damaging particulate that we can breathe. Yet we send our kids off to school every morning aboard one of those deathmobiles. You have noses. You have lungs. You have google. How do you not know how bad diesel exhaust is? Each day, half a million school buses, nearly all diesel, carry 26 million kids to schools in the United States. Diesel exhaust is a known carcinogen, is associated with asthma, autism, brain dysfunction and more. And we’re doing this on a daily basis.

Folks, we have the technology. I have a clean diesel that puts out no black smoke. It has a system that rinses exhaust with an organic spray. Clean diesel is a reality and the desirable option (until we go all-electric) so let’s adopt clean diesel now.

Electromagnetic Pollution. In 1990 I moved from Hollywood to Burbank. Compared to Hollywood, Burbank was almost like a midwestern city but with palm trees instead of cottonwoods, smog instead of air and about a dozen different languages spoken. On the first day there, I took a walk with my two dogs. A few blocks from my house we bisected a corridor of high-tension power lines that stretched into the distance and disappeared over the Verdugo Hills, terminating, I imagined, at Hoover Dam in Nevada. As we passed under the wires, I heard a distinct crackling sound above me like static on a radio. And, I could feel the short hairs on my neck and arms stand up. They say that if you feel that sensation during a thunderstorm to hunch down because it augurs a lightning strike. That feeling, that experience was the beginning of my awareness of the powerful sea of energy we live in.

Our planet is being polluted with a gush of radio and electronic energy waves that increases with each Bluetooth device, each cell tower, each electronic device of any sort. And to think that energy has no effect on our health and the planet is ludicrous. Known broadly as Electro-Magnetic Frequency pollution or EMF, this web of broadcast and radiated energy is increasing in strength and presence, invading our homes, workplaces and the entire planet. The farthest reaches of the deepest oceans are not immune. Nor are the deepest caves. Your bedroom, your basement, your favorite fishing hole and your church will not give you sanctuary from its extended reach.

It would be impossible to list all the sources of electromagnetic pollution that pervade our environs. Consider but a few that didn’t exist even a few years ago: compact fluorescent lights, Wi-Fi home systems and country-wide hotspots, laptops, iPads, cars with hundreds of onboard computer chips and giant lithium-driven electric motors, Fitbits and Bluetooth. Do not for a moment think that electromagnetic waves do not affect you. Some of them are worse than getting a daily x-ray.

Statistical evidence is mounting that the waves of energy emanating from our appliances, cars, machines, radios, phones and gadgets have a dramatic effect on our bodies and function. We used petroleum-based products and chemicals for a century before we recognized the damage they were doing. We are only now beginning to realize the havoc wreaked by EMF.

Noise Pollution. So you can think little of it if you wish. All I know is that humans are natural beings, tied to nature. And there is hardly anywhere on the planet anymore that isn’t polluted with anthropogenic sounds. The farthest reaches of the poles, the deepest Amazonian rainforest and even 40,000 leagues under the sea. We boom our noise everywhere. It’s disrupting our natural biorhythms and that of the ecology. The same goes with light pollution.

Agricultural Pollution. This may be the most devastating pollution we emit, even worse than carbon emissions. It’s a topic worthy of its own column. Runoff of barely regulated chemicals destroy watersheds, rivers and eventually the oceans. And it’s not going away soon.

So, a climate agreement backed by nearly all of the biggest, baddest monolithic cartels on the planet, the corporations responsible for most of what’s wrong with our environment, is what we’re worried about?