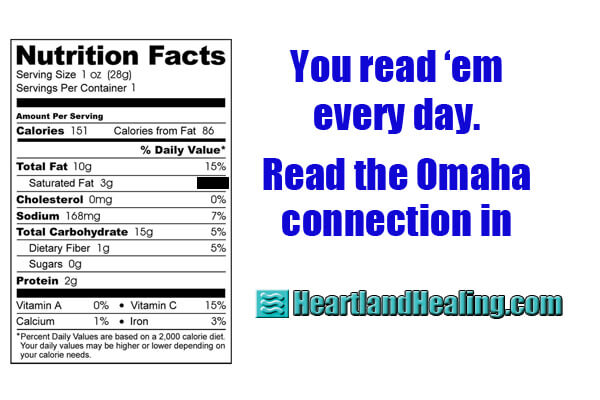 If you’re reading this, there are two things you should know: One, chances are you’re going to die from heart disease; in this country it’s the number one killer. Two, those nutritional labels you read on the foods you buy could help prevent number one.

Everyone who picks up a snack at the corner Junk Food Store knows they can look at the Nutrition Data Label and see how much fat, sugar, cholesterol and other glop they will be packing into their arteries for their 99 cents. We may still choose to swallow the poison, but at least we won’t be ignorant of the consequence. Before 1990, that wasn’t so clear.

Back from the Brink. Phil Sokolof was too young to die. He shouldn’t have had a heart attack at 43. But he did. “I knew it right away,” he said when I interviewed him for the 1999 Healing Arts Directory. “I didn’t have any of the heart attack risk factors… except one. My cholesterol was over 300. Luckily I had a doctor who knew what that meant.”

It may sound strange, but in 1966 when the Omaha businessman had that heart attack, cholesterol was not so clearly linked to heart disease. Now it’s common knowledge that out-of-balance cholesterol level puts one at risk. Phil Sokolof helped the world become aware of that by spending millions of dollars of his own money to take on mega-corporations in an advertising assault that caused them to change the way they serve food to Americans. And he didn’t stop there. He went to Washington and leveraged his connections and money to promote the passage of the Nutrition Labeling and Education Act that put those very labels on the food you buy.

When I interviewed Phil Sokolof many years ago, he was not a physically imposing man. But at 77, he displayed the clarity and energy of a man half his age. At 5’10” and 145 pounds he looked slim and trim. I met him in his West Omaha penthouse office where his desk was neatly cluttered with papers and letters. He had the look of a man at work, a man with a mission. That look made him imposing to the businesses he targeted in his furious fusillades fighting heart disease.

In the fifteen years following his heart attack, Sokolof founded National Heart Savers Association and took on such corporate behemoths as McDonald’s, Burger King, Wendy’s, the dairy industry, Nabisco, Merck Pharmaceuticals, Pillsbury, Pepperidge Farm, the egg industry, the U.S. Department of Agriculture, the Federal Trade Commission and powerful United States Congressmen. His mission was to teach the American public how dangerous ignorance about our food could be.

Sokolof’s history was one of success. He succeeded in just about everything he tried. After a brief but formative career in vaudeville, the Omaha native began a contracting business, then began manufacturing steel corner channels for the new building technology known as plasterboard. Successful marketing led to millions of dollars, a massive profit when he sold the business in 1992 and a healthy stock portfolio.

Slaying Giants. ”In the ’50s, I was doing telemarketing before the word was invented,” he told me in 1999. Marketing and business acumen came easily to Sokolof. After founding NHSA in 1985, Sokolof used the power of the pen to virtually coerce food manufacturers and retailers to take a look at what they offer Americans to eat. The goal is healthier hearts for Americans by lowering cholesterol and fat in our diet.

“It’s an unequivocal fact. The higher your cholesterol, the higher your risk of heart attack. Mine was over 300 when I had my heart attack. The Chinese have an average of 135 cholesterol and they rarely have heart attacks.” So Sokolof went after the companies that feed us fat and cholesterol in the processed foods we eat, both in restaurants and from the grocery store shelves. He did this by spending nearly 10 million dollars of his fortune, (“I’m comfortably in the bigger seven figures,” he said). The money went to advertising blitzes in national newspapers, a billboards in Times Square, cholesterol check-ups in midwestern towns and on lobbying Washington.

In 1990, Sokolof started running an ad campaign headlined “McDonald’s, Your Hamburgers Have Too Much Fat!” He took full page ads warning that McDonald’s fried its french fries in beef tallow. Burger King and Wendy’s were also named as offenders in the “Poisoning of America” campaign. The result? Wendy was brought to her knees. Burger King’s crown was tarnished and Ronald McDonald caved in. All three made sweeping changes in the way they prepare food. Most denied that the NHSA ads had any effect. Some acknowledged it.

Focusing on fat and cholesterol in the diet, Sokolof ran a spoof of the famous “milk mustache” ads put out by the dairy industry. In his campaign, Sokolof leveled charges at the dairy industry that lassoed Elsie the cow. “There is nothing ‘low-fat’ about 2 percent milk,” the ads said. Dairy sources admitted that milk straight from a cow is about 3.6 percent fat. Reducing the content to 2 percent is hardly room enough to call it low fat. Sokolof felt that the dairy industry ads misled the public. The government eventually agreed. The words “low fat” were removed from 2 percent milk labels.

Hawaiian Tropics for Suntans not Snacks. Fats were everywhere and wherever it was, Sokolof stalked the perpetrators. General Mills, Nabisco, Pillsbury were added to the list of high (fat) crimes and misdemeanors. Most Americans were unaware of the fattiest of oils that food manufacturers were using. Tropical oils like palm and coconut have the highest and worst type of saturated fats and the food industry was feeding them to us by the ton. The use of tropical oils was poisoning America. Sokolof was incensed and placed new ads. The fragrance of coconut oil may be nice on the beach, but leave it on your skin, not in your arteries. After the ads, major companies made major changes. Again, most denied the ads had any effect.

Sokolof took his fight to Washington. That nutrition label that tells you how much fat and sugar are in your food? Omaha’s Phil Sokolof greased the skids for that.

“I am the most proud,” Sokolof told me then, “of the Nutrition Labeling and Education Act. Now people can walk into the stores and know what’s in the food that you’re buying,” Sokolof said. In 1990, the federal law was signed and Sokolof was named an honorary sponsor of the bill.

Phil Sokoloff left us in 2004 but when you go into a store and read a label that tells you “too much fat, too much sugar,” you can credit Uncle Phil for whispering in your ear, “Put it down.”