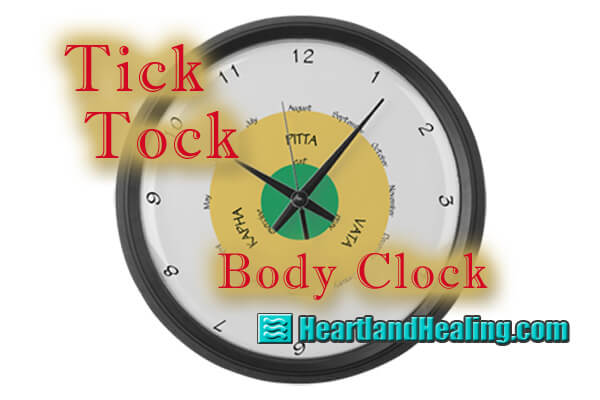 Like it or not, humans developed in tandem with a set of directives known collectively as Nature. Somehow, Western culture veered onto a path of distraction and cunning while seeking ways to break that bond. Instead of working in parallel with a proven system that has sustained a viable medium for life over several eons, humans now are intent on throwing grit into the gears of a finely tuned machine. What’s up with that?

We descendant dregs of a species gone wrong, labor to endure another example of our hopeless human hubris each Spring and Autumn when schedules skew just because we want them to. Instead of synchronizing our lives with a cosmic clock that has ticked reliably for millions of years, we insist on swimming against the solar tide. We call it “Daylight Saving Time” and wreak havoc on our bodies, breaking step with Nature’s sundial.

All living things on the planet dance through the day to the rhythm of Nature. Diurnal or nocturnal, all creatures tick and beat as the world turns. Try as we may, we humans cannot totally divorce ourselves from Nature’s timekeeper. We pay the price when we ignore the details of timing Nature has set forth. Yet by understanding the route the rhythm takes, we have the opportunity to trudge our timeline with less wear and tear on our bodies and minds. We need only pay attention.

Ancient wisdom. For thousands of years, the wisemen of India have been know as “rishis”. About four millennia ago, they began documenting what they knew in Sanskrit tomes known as the vedas. Rishis both observed Nature and intuited. Nature’s clock was apparent to them. The notion that humans should synchronize with Nature was not novel. It was normal. They called the clock system dinacharya.

First, one must realize that the knowledge of life the ancient Indians documented, (known as Ayurveda) had already defined a version of quantum physics and identified universal energies known as doshas. The three main doshas are pitta, vata and kapha. Each has its own energetic character. Pitta is fiery; it metabolizes. Vata is airy; light and wispy. Kapha is heavy; earthy, solid.

What the rishis observed about the twenty-four hour clock helped them divide it into day and night segments. The three energies each have their own sections of the day and the night.

The daylight segment begins with kapha starting at about 6 a.m. It transitions into the four-hour daytime pitta segment about 10 a.m., lasting to 2 p.m. when it moves into vata until 6 p.m. Then the nighttime segments begin and repeat the same sequence: kapha from 6 p.m. to 10 p.m.; pitta from 10 p.m. to 2 a.m. then vata from 2 a.m. to 6 a.m. then repeat. 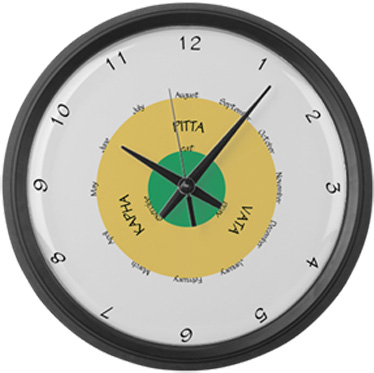 You coulda thought of that! If you were a primitive human living thousands of years ago and took the opportunity to observe the way nature and your body responded to each period of the day, you may have come up with the very sequence the rishis described. Haven’t you noticed laying in bed during the spring or summer that with the 5:30 sunrise, birds are chirping like crazy, flitting about to greet the day? Well, that segment of the day corresponds to the ending of the vata segment and the energy of vata: airy, flighty, energetic. Around 6 a.m. though, entering into the heavier morning kapha segment, things slow down. By 7 or 8, those birds are silent, no more chirpiness as they go about their day. Attentive humans noticed that if you lie in bed past the changeover into the heavy kapha segment, it’s even more difficult to rise and shine.

By 10 a.m., the body moves into the fiery pitta daytime section. Time to bring energy into the body to metabolize. It’s lunchtime. From 10:00, through noon then to 2 p.m., time to eat. Ever notice that if you skip lunch, by 3:00 or so, your appetite has subsided somewhat. You’re not hungry like you were at 11. You went past it. Daytime pitta is time to bring energy in with our heaviest meal of the day.

Come 2:00 in the afternoon though, pitta ends and we move into vata. It’s the flighty, airy part of the day. Concentration wanes. The mind wanders a bit. All you can think of is getting home and relaxing. By 6 p.m. you’re moving into the heavy evening kapha and all you want to do really is settle down, as the sun drops down. You eat a little, then if you’re smart, you head to bed at a reasonable hour before the day moves into the nighttime pitta section from 10 p.m. to 2 a.m. Ever notice that if you stay up a little past your bedtime, say to 11, you “get a second wind”? Miss that slow, heavy kapha window and it’s harder to go to sleep, isn’t it? That’s because you strayed into the nighttime period of pitta. That four-hour midnight pitta segment is energetic in the opposite way that the daytime pitta is. Day pitta is the “taking in energy” part. Night pitta is the “release energy” part of the cycle and toxins are released from the body, sometimes even as a night sweat. By 2 a.m. you’re into nighttime vata. Notice that you’re really dreaming now. Flights of fancy decorate your awareness in the airy vata time of night.

Toward the end of the vata period, just around dawn, it’s the best time to rise. Up with the birds while the energy urges you to take wing. Stay in bed past that time and you’ll want to be there all day.

Are you starting to get the picture? Time is natural and not run by clocks or legislation. Pay attention.

P.S.: Most of the world ignores the semi-annual torture of time misalignment. Shouldn’t we?