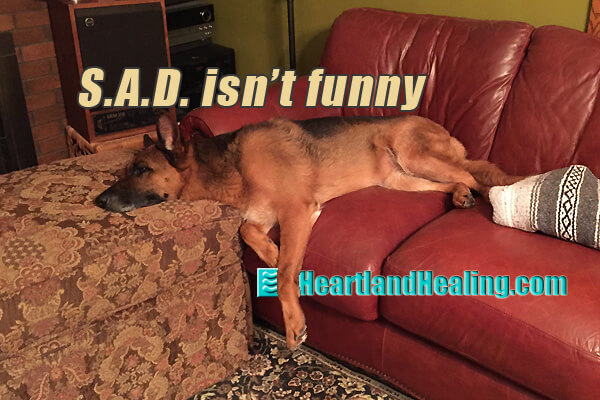 It’s only mid-October, not even Halloween yet, and we’ve seen our first snowfall in the Heartland. Crepuscular shadows erode the sunlight more with each passing day and millions feel the affects of the winter blahs. But as English historian Thomas Fuller wrote, long before the Mamas and Papas sang it, “the darkest hour is just before the dawn.”

If the throes of fall seem to be bringing you down as the leaves on the trees, take heart. You are not alone. Lethargy, crankiness, disrupted sleep patterns, melancholy, craving for “comfort” foods like those high in carbohydrates, outright depression — long is the list that can make a person suspect they suffer from what is commonly called SAD or seasonal affective disorder.

“Well I’m going out West where I belong, where the days are short and the nights are long…”  Ah, those lyrics sung by the Rivieras made the night life sound like the right life if only you spent your time partying in SoCal. But when the sun angles down like it does in the Northern Hemisphere this time of year, SAD isn’t funny. Like so many modern ailments, SAD is a term that the Western medical profession created, most likely so they have a justification to treat it, prescribe drugs and thus bill insurance companies or Medicare. Just because the motive for creating its terminology is suspect doesn’t make SAD less real, however.

Millions of people are now diagnosed with SAD every year. Many more are improperly diagnosed and prescribed a drug for depression. Others self-medicate to fight a depression that has a real cause that can be remedied.

Symptoms can be mild to severe. Some sufferers become bed-ridden with the blues, often sleeping twelve hours a day. Anxiety, irritability, withdrawal, overeating and sluggishness are some of the complaints.

Tick tock, internal clock. SAD is related to our internal circadian clock, physiologically identified with the suprachiasmatic nuclei of the hypothalamus. That internal clock is common to all mammals; rather interesting since the hypothalamus is our primitive brain. That primitive part of our brain is very concerned with basic survival and knowing instinctively when darkness is coming, how long the days are, or when it may be time to seek shelter from predators; just the kinds of things that concerned primitive man. One plausible theory is that SAD began appearing when man learned to alter the natural patterns of day and night by lighting the interiors of buildings efficiently. How does our brain know when to kick in the nocturnal hormones if we control the light? That’s a problem and the internal clock is challenged by the artificial resetting of daylight savings time, too.

In 1979, Dr. Norman Rosenthal and Dr. Al Lewy headed research investigating the connection between light and mood. They eventually focused on the hormone melatonin. Melatonin is produced in the pineal gland, located in the mid-brain. When research in the early 1980’s uncovered melatonin’s role in promoting sound and restful sleep, as an anti-aging supplement and showing success in fighting cancer, the public started gobbling tons of the hormone, easily available in health food stores. Melatonin showed virtually no danger of side-effects. Other research found that taking melatonin helps airline employees deal with jet lag affecting their sleep. Melatonin in even small amounts helped them adjust.

Melatonin controls the function of many glands and Rosenthal and Lewy found that the natural melatonin production in the body is affected by exposure to light in excess of 2500 lux. (Lux is a measure of luminosity.) The link between sunlight and hormonal and mood function was made.

Rosenthal and others demonstrated in later research published in the Archives of General Psychiatry in 1998 that the mechanism of melatonin affecting SAD may also have to do with internal core temperature. Melatonin and serotonin are two hormones that regulate temperature while we sleep. The relative temperatures associated with sleep and waking may be part of the mood equation.

“This little light of mine…” In 1980, Lewy began treating SAD patients with a bank of fluorescent lights, exposing them to the light for a period of six hours a day. Lewy found the therapy highly effective. Phototherapy, as it was called, became a viable tool for treating the newly termed malady, SAD.

Since then, physicians and therapists worldwide have endorsed light therapy as an effective treatment for the depression associated with SAD. The range of specific application is vast and the research continues.

Phototherapy has also been found to be helpful to elderly patients with dementia or Alzheimer’s syndrome. It is known that melatonin levels decrease as we age and there is a syndrome common in the elderly that is called “sundowner’s syndrome.” In winter months and summertime alike, when the sun goes down, those with Alzheimer’s or dementia can become sullen, depressed, anxious or morose as darkness approaches. Research published in the Journal of Geriatric Psychiatry and Neurology in 1997 and the American Journal of Psychiatry in 1992 are only two of the studies showing that light therapy can ameliorate symptoms in the elderly.

Lights designed for treating SAD are available. Most experts recommend talking to someone who has worked with SAD in helping to find a suitable approach.

Beating winter blues. In addition to light therapy, many have found that behavior modification and changes in diet can elevate mood during the winter months. Others find that negative ions, released in nature by the wave action at the beach, flowing water, large old-growth forests and such, can also have a beneficial effect. Needless to say, any Midwesterner who takes a mid-winter trip to the ocean can expect a little mood elevation! But there are artificial means also. Negative ion generators and salt lamps are two devices that many say can help reduce the affects of SAD by increasing the density of negative ions in the room. There are even alarm clocks on the market that simulate the slow increase of light that comes at dawn. Some also find relief by adjusting their intake of vitamin D or other dietary supplements.