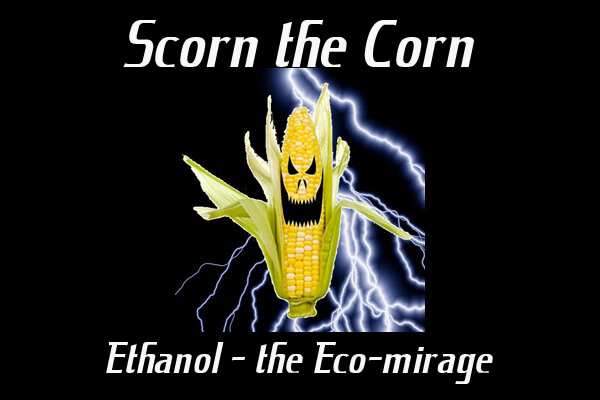 A posting on social media the other day reminded me that many people still struggle with understanding the statement, “Raping the land for ethanol is the same as raping it for oil.” It seems that most people get that collecting fossil fuels from the planet is a harsh and sometimes foolhardy exercise. (See: Deepwater Horizon.) Or just ask the folks in Oklahoma. You know, the folks whose houses and businesses are crashing down now that the extreme practice of hydraulic fracturing (“fracking”) has managed to make once earthquake-free Oklahoma the new Capitol of Tremors. Between 1978 and 1999, the Sooner State averaged fewer than two earthquakes of 3.0+ magnitude per year. In 2013 there were 109; in 2014 585; by 2015 there were 907 earthquakes of 3.0.1 Since the extraction of oil by fracking became commonplace, earthquakes in Oklahoma have gone from 1.6 yearly to 907. That’s a sign of some pretty extreme planet abuse. So how can growing and using corn compare to something like that? Let us count the ways.

Corn Covers the Earth. First, we have to realize that since Richard Nixon’s Secretary of Agriculture, the late Earl Butz, uttered the infamous phrase, “Get big or get out,” American farmers have had to do just that. Almost 60 percent of United States cropland is devoted to corn and its companion commodity crops like soybeans. Corn is planted fencerow-to-fencerow and subsidized heavily by the federal government.2 Corn is planted on over 97 million acres of US farmland, far more than any other single crop. Oh, how much arable land is planted in fruits and vegetables? Two percent.

Modern Corn is a Monoculture. In 1903 there were 307 varieties of corn in the United States. Today there are 12.3 Why does this matter? Diseases and pests usually attack only one or a few of any species, with others invariably resistant and able to survive. If our monoculture corn crop suffered attack by a disease, there are few options for resistance and it could be wiped out. Same is true of other food crops.

Corn is non-food. Only the tiniest fraction of all that corn we grow is turned into food for humans. About half is turned into ethanol. Another 35 percent goes to feeding confined cows, pigs and chickens. The remaining 15 percent is made into stuff and some goes into high fructose corn syrup and junk food. These number shift around yearly based on market but don’t fool yourself, corn is not food. Not for humans, anyway.

Corn Kills Soil Any farmer worth his salt will tell you the most valuable resource on the planet is not water, air or oil. It’s soil. Soil is a living, biological stratum of the earth. It’s filled with organisms that are vital to the planet. Corn is grown in soil that is stripped of its nutrients and biologicals by pesticides and over planting. It’s no longer soil. It’s a cardboard-like “dirt substance” that is lifeless and devoid of nutrition. That is why farmers must over-apply tons of chemical fertilizers to it in order to provide just the most basic nutrients for a corn plant to grow. Plants that have only the minimum of nutrients supply only the minimum of nutrients when they are eaten by us. Any wonder why we’re seeing the sickest generation? When the soil is lifeless, it blows away and erodes easily. Chemicals and even rain wash off and the chemicals pollute our waterways, causing “dead zones.” Without soil, we have no planet.

Corn is a voracious plant to grow. It takes more fertilizer than nearly any other crop. And all that corn out there? Did you realize that each stalk only produces ONE ear of corn? That’s some pretty inefficient use of land.

Carbon is carbon. The biggest incentive to grow Killer Corn is ethanol. Entire books have been written about what’s wrong with ethanol. But the biggest mistake about it may be that if we’re trying to curb global warming by capping the amount of carbon dioxide we put into the atmosphere, then why on earth are we continuing to burn a carbon-based fuel that still releases carbon dioxide into the atmosphere? Ethanol is a liquid hydrocarbon fuel. When it burns, it releases carbon dioxide into the air. And guess what? According to government research, ethanol actually puts more CO2 into the air than gasoline.4 How’s that grab you?

Folks, we’ve been sold a bill of goods. In order to keep our planet alive, we need to pivot away from incinerating any and all carbon-based fuels. The solution will require understanding the planet as a holistic environment and returning to a degree to modular, regional, locally based social function. Not much time left to make that shift.

Heartland Healing is a metaphysically based polemic describing alternatives to conventional methods of healing the body, mind and planet. It is provided as information and entertainment, certainly not medical advice. Important to remember and pass on to others: for a weekly dose of Heartland Healing, visit HeartlandHealing.com. and like us