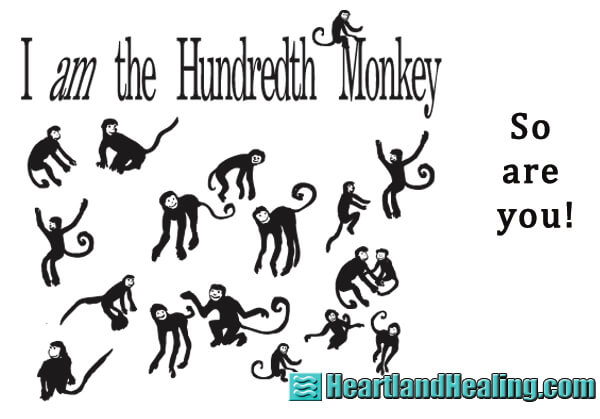 Singlemindedness: Tale of the Hundredth Monkey

Our minds are connected. Sometimes we are aware of it; sometimes not. But they are always connected. Jung called it the collective unconscious. Others have called it the universal mind. A Course in Miracles refers to this joined mind as the Christ. In any case, it reflects the oneness of humankind and can explain any number of phenomena we see.

All of us experience this oneness from time to time. Maybe it’s that phone call from Aunt Jane when we answer the phone with, “Aunt Jane! I was just thinking about you!” Maybe it’s that awareness we feel right before we find something we know we were going to find. Or maybe it’s a particularly intimate moment in love. We often just chalk it up to what we call coincidence. Yet how many times do we hear there are no coincidences?

The awareness of a collective mind helps explain powerful occurrences like autistic knowledge. Certain savants can hear a piece of music one time, and then play it flawlessly. During one scene in the movie Rain Man, Dustin Hoffman’s character watched hundreds of toothpicks fall to the floor and instantly knew exactly how many. It wasn’t because he had some superhuman auditory ability or counting capacity but because he was tapped in to a pool of information on a higher level, characterized as the joined mind.

The fact is, our singular minds long for that joining. Separateness is a body trait. The mind’s natural state is oneness. That’s pretty much what we spend our lives trying to achieve: that state of bliss that is typified by joining of mind, being one with another. Think of the euphoria that thousands feel when joined in a common cause, like a Husker game. They cheer as one. Or that millions feel when joined in a celebration of a holiday or national success. It feels good to be of like mind. Even the physical act of lovemaking is weak tea without true joining of mind.

The enlightened mind sees the oneness in all. And in the evolution we are experiencing now, the higher goal we seek seems to be that oneness; caring for all in the same manner that we care for ourselves. Not exactly a new idea when we remember the exhortation, “Love your neighbor as you love yourself.”

Do the Monkey. Then do the math. Many readers may have heard the story of the Hundredth Monkey. It is embraced by many as scientific evidence of the One Mind. It does not matter that it has become rather embellished through the years; it serves.

In the early 1950s, a group of scientists began studying a tribe of Macaque monkeys on the Pacific island of Koshima. To easily observe the monkeys in the open, the scientists dumped sweet potatoes onto the beach. One of the monkeys started cleaning off the sand by washing her sweet potatoes in the water. Slowly, the scientists noted, one by one the monkeys learned. However, when the 100th monkey finally learned to wash his sweet potato, instantly, all the other monkeys began washing them. The researchers believed that a sort of “critical mass” had been achieved and awareness became spontaneous, a shared mind knew at once. But that’s not the most amazing part of the story. At the very instant this 100th monkey became aware, the habit jumped over the sea. All the monkeys on the neighboring islands began washing their sweet potatoes too. And the mainland troop of Macaques at Takasakiyama began doing it as well.

As writer Ken Keyes summarizes, “Although the exact number may vary, the Hundredth Monkey Phenomenon means that when only a limited number of people know of a new way, it may remain the consciousness property of these people. But there is a point at which if only one more person tunes in to a new awareness, a field is strengthened so that this awareness is picked up by almost everyone! When a certain critical number achieves an awareness, this new awareness may be communicated from mind to mind.”

So in our search for self-enlightenment and the enlightenment of the world, we learn how important that “hundredth monkey” among us is. If that “one more person” just learns to be enlightened, then the whole world will have enlightenment available to it! But here is the key! If we truly believe in the One Mind, then there is no other monkey out there. The only one you have to worry about being enlightened is you. The only one I need to get it, is me! If minds are truly joined, if there is a Universal Mind, then there’s only One Monkey! Don’t find yourself waiting for the other guy. There is  no other guy. You can say to yourself, “I am the Hundredth Monkey.”