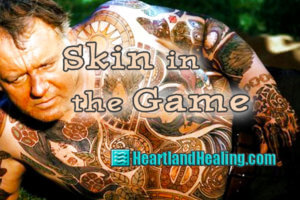 Skin In the Game

Okay, I had some weird thoughts as a kid. I admit it. One that has stuck in my mind is waking in that gauzy light of early morning, opening my eyes and seeing my hand resting on the bedsheet in front of my face. Barely conscious, I just stared blankly at my hand as if I were a detached onlooker. I moved the fingers slowly, one at a time then in concert. Again and again they moved. I marveled at what was required for such a simple action. The nerve impulses that had to course down from my brain, along radius and ulna; the axons firing and transmitting commands as the ionic potential of the cell walls would shift, positive to negative then back. The contraction and release of muscle fibers attached to ligaments and tendons, inserted into bones and the coordinated function resulted in me being able to see the movement. What a mechanical work of art this body is, I thought to myself. The simple motion of fingers and hand moving in control seemed miraculous. Human intellect over the ages has yet to build a mechanism that moves as precisely or smoothly; not even close.

The Skinny A body is much more than a hank of hair and a piece of bone, muscles and nerves. It’s also organs; complex organs and glands. Thyroid, liver, kidney, bladder, colon, heart, brain, stomach — the list is long. Then there is that most obvious of organs, the largest and most complex: the skin. Yes, the skin is an organ. It performs functions that most of us have never considered.

Protection In a silly sort of way, without the skin, we’d be a blob of tissues falling all over the place. Few people realize that the skin fully encapsulates the entire body. It’s all one sheath. The skin that is on the shoulder connects to the skin that is on the neck, throat, cheeks. lips, mouth, throat, esophagus, stomach lining, intestines and out the rear. It’s all part of the same structure. The tissue lining the gut is part of the same organ that covers the back. But of course, the most obvious part of the skin organ is that on the outside of the body. The skin is our first defense against radical temperature change, keeps us from drying out, defies attacking microbes and even relatively sharp objects! Part of the protection comes from the waxy and oily secretions the skin manufactures. We’ve got a clear coat just like a car.

Microbial balance Our skin is also a biological zoo. It’s like a vast jungle, forest and prairie providing habitat for billions of bacteria, parasites, fungi, microbes. Most of these cling-ons are friendlies. And they’re not exactly freeloaders. Many perform important functions. You see, like most biologicals, they are territorial. So if a baddie attaches to the skin, these dermal residents tend to rally and make sure it’s not a threat to the status quo. At the very least, they raise an alarm like a microbial militia and the militant regulars, aka the immune system, can send in the army.

Organelles And this skin, largest of organs, is also home to sub-organs that provide important functions that are found nowhere else on the body. The essential vitamin known as Vitamin D is produced in specialized cells of the epidermis. When bathed in ultraviolet light from the sun, these skin cells make vitamin D. It’s a delicate process that balances between too much sun and not enough. Interfering with that may result in diminished immune system function.

Respiration There is a famous plot point in Ian Fleming’s Bond novel, Goldfinger, where a Bond Girl is killed by painting her body completely in gold paint. The cause is called suffocation. Now, painting a body with a toxic substance could kill but not by suffocation. Humans, like most mammals, use lungs. While some cutaneous gaseous exchange occurs, it is minor. However, the skin is a semi-permeable membrane. Transdermal exposure to chemicals and toxins can be harmful. There again, the natural skin defenses serve to block most dangerous chemicals. But as a general rule, if you let a chemical contact your skin, do not be surprised if it finds its way inside.

Think before you ink. All this about the skin gives pause for thought. When one realizes the vast and crucial functions of our largest organ, is it something we really want to mess with? Could it really be that intentionally inflaming that organ with an electronic needle infusing toxic and carcinogenic inks has no dangerous effect? That is hard to reconcile. Would a rational person ask a technician to use a vibrating needle to tattoo the side of the liver or the lungs? The skin is no less vital to our healthy balance. To think that extended areas of ink don’t interfere with vital skin functions defies logic. But then again, logic isn’t always a human strong suit.

Heartland Healing is a metaphysically based polemic describing alternatives to conventional methods of healing the body, mind and planet. It is provided as information and entertainment, certainly not medical advice. Important to remember and pass on to others: for a weekly dose of Heartland Healing, visit HeartlandHealing.com.
2020.01.07