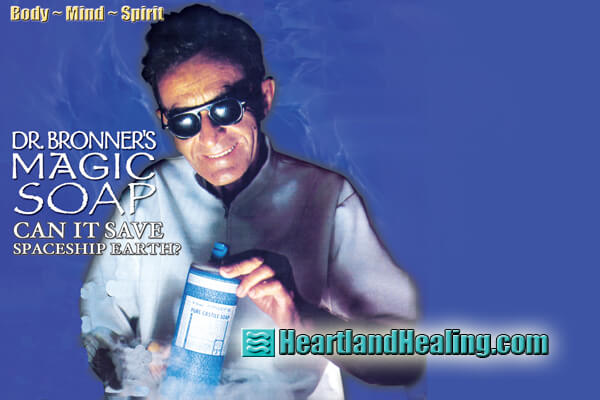 Certain memories in our lives exist deeply embossed with a time and place. We remember precisely where and when we drove a car for the first time, that first kiss, the first time we heard a certain song or where we were the night of the moon landing. For fans of Dr. Bronner’s Magic Soap, I’ll wager most of us remember in detail the first time we showered with that peppermint Castile liquid soap.

Emanuel Hillel Heilbronner was a third generation master soapmaker. His family made soap near the German town of Heilbronn starting in 1858. Emanuel followed in the family business but by 1929, Nazi tyranny was fomenting in the Fatherland. Emanuel urged his parents to leave Germany. They resisted and he immigrated to the United States, leaving his parents and their soap factory behind. Hitler was rising in power and Emanuel dropped the “Heil” from the front of his name to become Emanuel Bronner. Two sisters later escaped Germany but both his parents perished in concentration camps.

To say Emanuel Bronner was intense would be an understatement. In fact, while living in Chicago, while publicly speaking, authorities thought him a little too passionate and committed him to the Elgin Insane Asylum. Though he had not harmed anyone, he was forced to endure the inhumanity of modern medicine known as electroshock therapy for nine months. He finally escaped the asylum (on his third attempt) and that was when he headed west.

Following those troubled times in Chicago, by 1947 Bronner made his way to Los Angeles virtually penniless. There he frequented Pershing Square, a hotbed of activists and visionaries. Though of German Jewish descent, his personal belief in universality transcended all religions and he often orated in the park about the oneness of all humanity and the similar messages found in all the great religions. He called his ideals and guidelines the “Moral ABC” and he called on words of wisdom quoting Jesus, Buddha, Rabbi Hillel, Einstein, Thomas Paine, Spinoza and Thomas Edison among many others.

In Los Angeles Bronner took advantage of his proximity to Pershing Square to literally mount his soapbox and voice his opposition to war, violence and to promote his vision of world peace. He taught his “Moral ABC” passionately, expounding on his theme that we are “All-One-God-Faith” with all living things, the earth, and our brothers and sisters.

Meanwhile, he began producing a vegetable oil-based Castile soap with essential peppermint oil following his family’s historic recipe. He was, after all, a master soapmaker. He sold the soap during his lectures at Pershing Square. After a while though, he noticed that people would indulge a certain amount of his rants but invariably, they were more interested in the high-quality liquid soap he sold. He desperately wanted to get his message across so he began printing his philosophy on the soap label. The most unique bottling label in the world was born.

Soap and water. Through the 1950s, Bronner, now a widower with two young boys, struggled to sell his eclectic soap, manufacturing and bottling it by hand in Escondido, Calif. In the 1960s, though, something happened that helped the soap gain ground: Hippies and environmentalists recognized the all-natural soap, made without chemicals or detergents. It was eco-friendly and above all else, the label espoused the very message that characterized the Age of Aquarius: Love, Harmony, Peace and Oneness. Spirituality was not a dirty word to the children entering the age of the water sign, Aquarius. The soap was cheap, pure, all natural, generic, homespun and could be used for “18 different uses,” according to the label.

Most of all, to the generation that was hoping to make a difference in the world, the message was the thing. Bronner’s “Moral ABC” saturated the label in small print with phrases, sayings, quotes and even quirky comments from Bronner: “Keep out of eye. Dilute! Dilute! Okay!” The majority of sayings was about the fellowship of mankind and protecting our “Spaceship Earth.”

“Listen Children Eternal Father Eternally One!” “Exceptions Eternally? Absolute None!” “Mason Hillel taught carpenter Jesus to unite all mankind free, come hell, hate, ban, you’ll enjoy God’s spaceship Earth & do great work within it, which is more my son, you’ll be man! A man! Sure, East is East and West is West and never the twain shall meet! But there is neither East nor West, nor border, breed nor birth, once the Moral ABC unites all mankind free on God’s spaceship Earth!” “6 billion strong, we’re All-One! As teach Abraham-Israel-Moses- Buddha-Jesus.”

Making It Tingle. And it goes on, on the label. For 3000 words. These were the sentiments that Bronner drove home when he stood on his soapbox in Pershing Square. Now he found he didn’t need the box, just the soap. And it traveled well. Word of mouth was the key and nothing traveled faster than the counterculture of the ‘60s. To a generation into sensation it was a perfect match: The hallmark of the original formula was the crisp, peppermint oil that left your skin tingly all over.

Emanuel passed away in 1997, leaving a four million-dollar business to sons Jim and Ralph. The company thrives still, under his grandsons. Try a bottle and you won’t soon forget that tingling feeling.