Home » Heartland Healing » Standing on the Shoulders of Giants 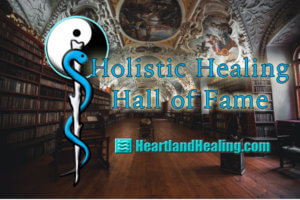 Standing on the Shoulders of Giants

There’s an irony about the terms “alternative medicine” and “traditional medicine.” They are used exactly backwards. Ask the average American to describe “traditional” medicine and they’ll tell you it is the kind found at the behemoth hospital centers. It’s where  medical doctors use drugs, surgery and technology. It’s where you go to get the drugs you see advertised on TV. That’s traditional. The “alternative” to that would be using herbs, acupuncture, chiropractic, healing touch, hypnosis and those types of approaches. Well, those are alternatives to modern medical practices but they are far more traditional than modern techno-pharmaceutical medicine. You see, the very word “traditional” implies that something has been around for long enough to become a tradition. When it comes to most of those “alternatives”, they’ve been around thousands of years longer than conventional medicine. The kind of medicine found in giant medical centers has been around for only about 100 years; hardly long enough to be a tradition.

Culture shock therapy. When I returned to Omaha in the mid-1990s after a quarter-century of happy living in Los Angeles, I was surprised to find so few options for holistic therapies. I was accustomed to taking one of my Scotties to a 70-year-old veterinarian for acupuncture to treat allergies. I regularly visited an herb store in North Hollywood for bulk echinacea, vervain, mandrake root, valerian, lady’s slipper, spearmint and other herbs. Reiki, meditation, yoga and macrobiotic menus were regular features of most Southern California lifestyles. In Omaha? Not so much. To put it in perspective, on arriving here I found only two yoga studios in Omaha that were open daily. Think of that. So to say that holistic healing therapies were on the down-low in the Heartland would be a major understatement.

Giving credit where due, I found that No Name Nutrition, virtually the only real “health food store” in Omaha at the time, was an information nexus for holistic and natural modalities. I learned from the owners, the Hurleys, that there were indeed practitioners in the area devoted to the traditional healing that embraced the time-tested methods noted above. I searched them out. I got their contact information. I cataloged it. I shared it with others and promoted it to the public. In fact, that became a root for Heartland Healing.

By the late ‘90s, Americans were demanding more information about less invasive, more effective ways of getting healthy and staying healthy. The market expanded and soon one could find Echinacea, melatonin, herbal supplements at the corner drugstore. Everyone was taking a yoga class. Chiropractors were commonplace. Few people realized that the foundation had been laid years before by trailblazers, pioneers who braved sidelong glances from Big Pharma, government regulators and mainstream media. Early on, practitioners with vision, inspiration and dedication took the road less traveled and led us toward the holistic oasis we sought.

Standing on the shoulders of giants. I have long been considering devoting some words to some of the powerful influences locally who forged ahead at a time when the medical machine saw them first as fools, then as a threat and finally, begrudgingly, as a valid option. So I will use this and occasional Heartland Healing columns to mention just a few who were in at the beginning of the new healing revolution we’ve seen in the past three decades. It cannot be a complete list; I’ll miss mentioning some simply out of ignorance. Readers can help me out by emailing suggestions.

Jay Parsow, M.D. I heard about Jay long before I met him in 1998. People told me there was an actual M.D. who was embracing what folks described as “energy medicine.” I went to his office to see him. Jay’s gentle demeanor and clear-eyed presence took me in right away. Dr. Parsow began his medical practice with an interest in rehabilitative medicine, helping people with physical handicaps or debilitating injuries. When he discovered some of the more holistic therapies, he noticed that in many cases they were more effective than conventional ones.

“The more we applied these therapies, the better results we saw. Our results went up, our need for conventional tests went down,” Parsow told me then.

“I have come to appreciate the subtle energies that make up a human being, we almost literally ‘pull’ that energy out of a person when it manifests as illness,” he said.

In his medical practice, Parsow shifted toward a holistic approach by 1996. His practitioners provided, “…beyond their professional degrees, they have different styles and levels of intuitive skills. It’s how we learn about our patients and leave no stone unturned in helping them heal or feel better.”

As one of the early adopters of traditional healing in Omaha, Dr. Parsow suffered the wrath of institutional regulators in state government. From patients’ viewpoint, there was nothing controversial or compromising about Parsow or his results. But to the stringent, monolithic regulators, it was beyond their understanding so they challenged him on numerous occasions. He was one of many practitioners early on whose feet were held to the fire of bureaucratic protectionism.

Dr. Jay Parsow left us unexpectedly and far too early in 2001. The Omaha healing arts community benefits from his legacy to this day.