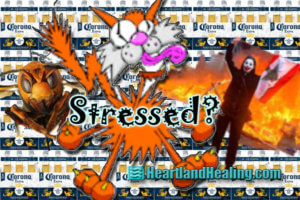 When did you ever think you’d wish all you had to worry about was a murderous hornet the size of a clothespin? Oh, wait. Many of you don’t know what a clothespin is. Okay, never mind.

The year 2020 has gotten off to a pretty rocky start. Contrived political chaos nationally, then a visit from a virus causes global panic, spurious medical opinions lead to economic crises, invasive giant hornets and then calculated civil insurrection not seen since Lincoln was President. It all kind of leads to sleepless nights for many people.

“i’m stressed out, man.” That was a mantra common to the “me decade” of the 1970s. It was when we as a culture perfected internalizing outside events and gave them penultimate power to create stress. My observation is that before the self-indulgent ‘70s, humans seemed to view external events as challenges to overcome, just more hoops to jump through in the circus of life. We took them in stride, as it were. But as a coddled society, we increasingly blame outside events for everything. And stress ends up being the response of our thoughts to outside events.

Nature has a purpose for the stress response of the body when the mind perceives a threat. Simplified, it can be called “fight or flight”. But when neither is appropriate or even actually required, the body gets “all revved up with nowhere to go.” Hormonal effects in the body light a fire that is in fact, unnecessary.

The mechanism of stress response in the body is pretty simple. And pretty prehistoric. It makes sense when Homo sapiens needed to flee a sabertooth tiger or put up a fight when it catches up. But most of the time in the 21st century, humans are running from a self-created boogie man, usually prefaced with the phrase, “What if…?”

The major hormone released in stress response is cortisol. It’s good stuff to have coursing through the bloodstream if there really is a sabertooth tiger at our heels. But it’s not really all that good to have pumping around when we stress out waiting for a stoplight to change to green when we’re running late for a meeting or reading about murder hornets that have not and probably never will see your body in your lifetime. (Remember “killer bees”? Yeah, they were a thing.)

Most of America is overweight and stress is cited as a cause of keeping on the pounds no matter how we diet. Stress is also implicated in a host of other maladies. From cancer to canker sores, heart disease to hypertension and immune dysfunction, stress plays a role.

I cannot stress this enough. Stress comes from the mind. It’s a product of perception. And that perception can be real or imagined. Doubt it? Have you never felt your heart race watching a scary movie? Or even just closing your eyes and imagining teetering on a tightrope between two towering buildings? The mind causes stress, real or not. So, if one wants to effectively deal with stress, one has to go to the arena where stress is playing.

Sooner or later, an alert human being will realize that the only thing in the universe one can control is one’s thoughts. Like anything else, the mind needs to be trained or at least exercised in choosing which thoughts we want to give rein to. We have that choice. Before one can become adept at marshaling or choosing thought, one must slow down the incessant flood of thoughts that comes from the primitive mind. Slowing down the random bursts of thoughts is where meditation comes in.

Do not confuse medicate with meditate. I’ll go on record right now saying there has never been nor will there ever be a medication, recreational or prescription, that can do what meditation can do. Using medication is making the same mistake that surrendering to outside influence is: placing cause outside rather than inside the mind.

Like anything inherently human, meditation is not learned from a book or online or a youtube video. Some things that are primal — like walking, talking and the like — are best learned in the presence of a teacher. That’s all I will say right now about learning how to meditate. Meditation is the baseline. Without it, the mind is untrained and submissive to the very world’s teaching one must unlearn.

There are facilitators, however. By that, I mean that there are actions one can take to make using the mind easier. One of the most obvious is keeping the brain free from intoxicants. The brain and the mind are two different things. The brain is the mind’s premier physical interface with the body, its tool. If a healed mind goes to the toolbox and finds the powertool rusted, broken, temporarily out of order, the body has little guidance and the stress response is assuredly out of control.

Other actions can assist, too; mostly the ones your mom told you about when you were growing up. Need a list? Eat right, sleep right, ignore what others think of you. Don’t pollute your mind with junk food thoughts from outside sources. If it doesn’t feel right, step back.

Be grateful the murder hornets are not here. And be happy that “they” were wrong about the end of the world. It hasn’t happened yet.